An American Pickle has a dynamite premise, but it never follows through completely. B 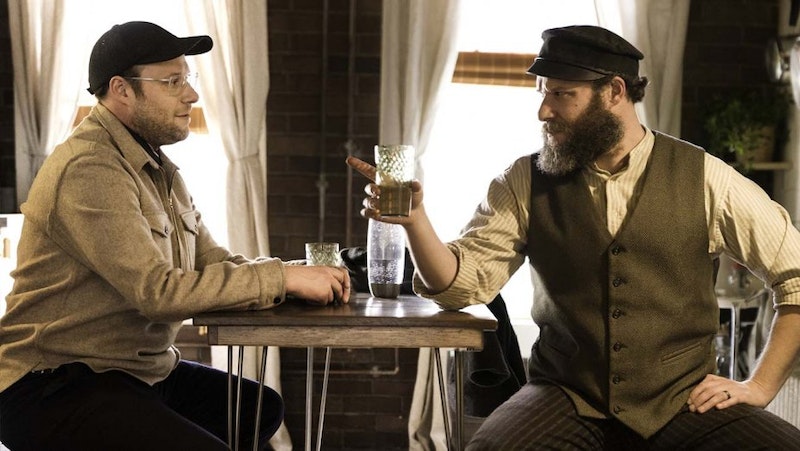 The new Seth Rogen vehicle An American Pickle has such a dynamite premise, and so many good ideas, that it's a shame it goes off the rails at around its midpoint. "Unfrozen Caveman Lawyer, except from the shtetl" is a fantastic idea, but the film only occasionally lives up to that idea’s potential. It was directed by Brandon Trost, a cinematographer who shot several of Rogen's earlier comedies, and written by Simon Rich, adapting his own short story that appeared in The New Yorker. It was supposed to come out in theaters this summer, but Sony sold it to the newly-launched streaming service HBO Max, where it will debut Friday, as that service's first original movie. It’ll open in theaters in non-U.S. territories.

An American Pickle stars Rogen as Herschel Greenbaum, a shtetl inhabitant in a fictional Eastern European country at the start of the 20th century. This is another film using different aspect ratios in different segments, as the 1920 scenes are shot 4:3, before the screen gets wider for the bulk of the film.

Along with his wife (Succession's Sarah Snook), Herschel emigrates to New York, where he dreams of success, or at least of being able to afford seltzer water. In 1920, he falls into a pickle vat, where he's frozen in brine for a century. Unfrozen in the present day, Herschel goes to live with his great-grandson Ben (also Rogen), a struggling app developer who nevertheless lives in a Brooklyn apartment that's only slightly smaller than Penn Station.

At first, the plot contains elements of both generational-clash and fish-out-of-water humor, before eventually putting the two Rogens at odds. Eventually, Herschel comes up with a plan to embrace artisanal pickle brining, at which point An American Pickle becomes the first film since Crossing Delancey, more than 30 years ago, to feature a pickle salesman as its hero. Herschel's pickles soon become a business and cultural sensation, while making his great-grandson jealous. This segment is the film's strongest, as it's got a great satirical point about how much Brooklyn hipster types love artifacts of the old world and appropriating them to their own ends.

But it falls apart in the film's midsection, when it briefly turns Herschel into Donald Trump—complete with mean tweets—before making some tiresome points about cancel culture. There's also a witless courtroom interlude, which lifts a key plot element from the "I'm Oscar" arc on Arrested Development. The very end is affecting, but the film takes its time getting there.

There are more problems. Brooklyn pickle businesses don't often receive venture capital, especially not quickly, nor is it possible to sell enough pickles in a matter of weeks to purchase a $200,000 land parcel in New York City. And perhaps most bothersome, it's never quite clear whether or not people meeting Herschel for the first time are aware that he's the guy who was unfrozen after 100 years. You'd think that would make him world-famous and recognizable to just about everyone, but the script glosses over that point.

Rogen, who between the two parts gets about 95 percent of the movie's dialogue, gives one of his better turns on screen, in a rare role that allows him to stretch. Presumably the actor shot the whole Herschel part with a beard, shaved it, and then shot the Ben part. As for Rogen's decision to make a series of negative comments about Israel and Zionism in interviews while promoting the most overtly Jewish film of his career, I admire his chutzpah, even if it likely has the publicists for the movie banging their heads against the wall.

An American Pickle, while uneven, is likely to appeal to those with particular affinity for Seth Rogen, Judaism, Brooklyn and pickles.