The Big Ugly doesn't "move," it just sits there on the screen. C- 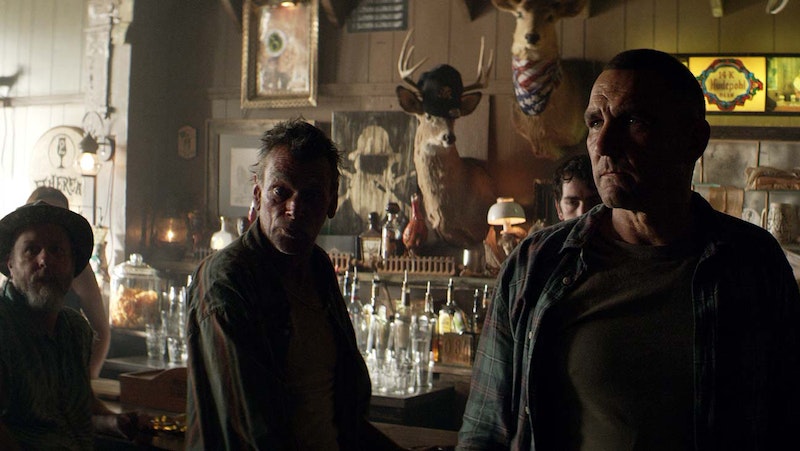 The Big Ugly’s a film that, considering its premise and cast, should be much better than it is. It would appear to combine two different crime film sensibilities, of Guy Ritchie-style British and Appalachian backwoods crime, in a promising plot involving a London gangster sending his right hand man to West Virginia to set up an oil-related money laundering operation.

The film, shot in Kentucky, opens on VOD and a few drive-ins this weekend. The Big Ugly assembles a long list of skilled, veteran actors, including Ron Perlman, Malcolm McDowell, Vinnie Jones, Bruce McGill, and Nicholas Braun, who plays the hapless cousin Greg on HBO's Succession. Still, in a 105-minute running time, not much of interest takes place. The film just sits there on screen. It didn't help that elements of the film kept reminding me of much more skilled treatments of similar themes, like the TV series Justified and Paul Thomas Anderson's There Will Be Blood.

McDowell plays the English gangster, who sends Neelyn (Jones) to Appalachia to set up the scam with an oilman named Preston (Perlman), which involves laundering the English cash through the oil operation. But things soon go awry, when Neelyn's girlfriend (Lenora Crichlow) goes missing following an unfortunate run-in with Preston's son (Brandon Sklenar.)

Aside from an occasional fight, most of the film consists of indeterminably long dialogue scenes of tough guys being tough and delivering what's supposed to be intense monologues. It's hard to care about any of these people or anything that happens with them. I was interested in the money laundering, and the clashing styles of these two nationalities of criminals. But that part of the plot never gets going. And while it's nominally billed as an action movie, there isn't much action, either, just that handful of fights and a brief shootout at the end.

The Big Ugly is directed by Scott Wiper, an ex-actor whose directing resume indicates he’s specialized in films starring professional wrestlers. He co-wrote the film with Paul Tarantino (no relation, I imagine.)

Part of the problem is that Vinnie Jones, a longtime English soccer player who transitioned into a film career, mostly with Ritchie, isn't the greatest choice for the lead role in this type of film, while actors like Perlman, McDowell and McGill aren't given much to work with. Brandon Sklenar's psychopath isn't nearly as interesting or charismatic as that type of character should be. And Nicholas Braun isn’t nearly as engaging on screen when not spouting the snappy dialogue provided to his character by the Succession writer's room.