Creem: America's Only Rock 'N' Roll Magazine is a heady documentary about one of the earliest American rock mags. B+ 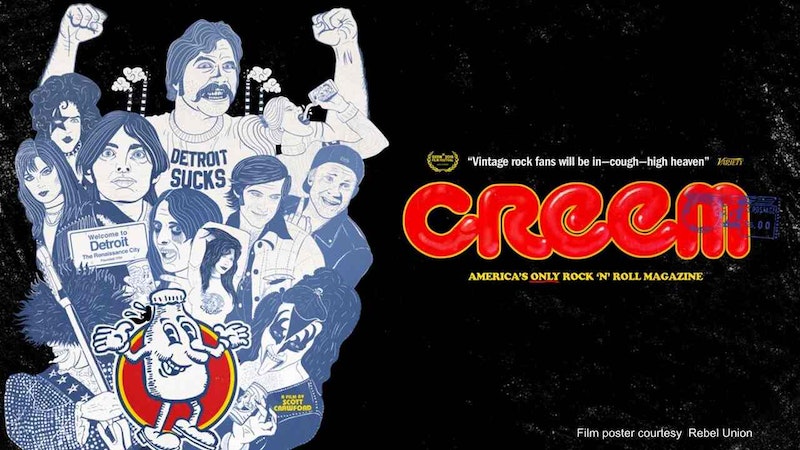 Creem was a rock 'n' roll magazine, formed in 1969, whose heyday comprised the bulk of the 1970s, and represented a Midwestern alternative to the coastal version of the counterculture of the time.

The magazine was based in Detroit, and later at a farm outside the city, and eventually in suburban Birmingham, and its Middle American location was a key part of Creem's identity. Creem embraced punk much earlier than most rock media—with Dave Marsh coining the term "punk rock" in the magazine in 1971—and had a soft spot for rock acts that came from Michigan, like Bob Seger, Ted Nugent and Alice Cooper. Creem was also home to a wild cast of characters, who had more than their share of bitter feuds.

Creem is the subject of a very enjoyable new documentary, directed by Scott Crawford and called Creem: America's Only Rock 'n' Roll Magazine; the doc is now available as a Virtual Cinema rental, after debuting over a year ago at South by Southwest, under the title Boy Howdy! The Story of CREEM Magazine.

Crawford’s documentary follows the magazine from its inception until the end of its main run, when founder Barry Kramer and critic Lester Bangs both died in the early-1980s, although Bangs had left the magazine a few years earlier. Those two key figures aren't around to tell their side of the tale, but Crawford's film interviews most of the relevant living people associated with the magazine, while also mixing in home movies and other archival footage.

"The pages were so full of folly," Ted Nugent says early on in the film, "superfluous, heady, hippie, nonmusical folly." The key point established by the documentary is that Creem was as much a scene as a journalistic entity, and it conveys exactly what that scene was about—in this case, iconoclastic, hard-partying, and celebrating the "gender-fuckery of rock 'n' roll," journalist Ann Powers says in the film.

In addition to the writers, the film features interviews with Chad Smith of the Red Hot Chili Peppers, Kirk Hammett of Metallica and Michael Stipe of R.E.M. Many people born after 1980 will likely associate Creem at first with Cameron Crowe's movie Almost Famous, and the part in which the teenaged male protagonist, based on Crowe, befriends Bangs (played in the movie by Philip Seymour Hoffman), who gives him both an assignment and some mostly unheeded advice. Crowe—who also wrote for Rolling Stone, is interviewed, as is his old editor Ben Fong-Torres. Creem's rivalry with the more establishment Rolling Stone, which embraced music that Creem would never be caught dead with, is another major theme throughout.

While the documentary also makes clear that a lot of talent passed through the magazine during its run, it doesn't try to argue that everything that ran in Creem was brilliant. At its worst, as in one review that angered Joan Jett, it was sexist, badly written nonsense that recalls the worst of Ain't It Cool News.

The Creem doc is fast and breezy, and ends shy of the 80-minute mark. It's an entertaining exploration of past, whether you're familiar with that particular scene or not.