The Female Vampire Watches You 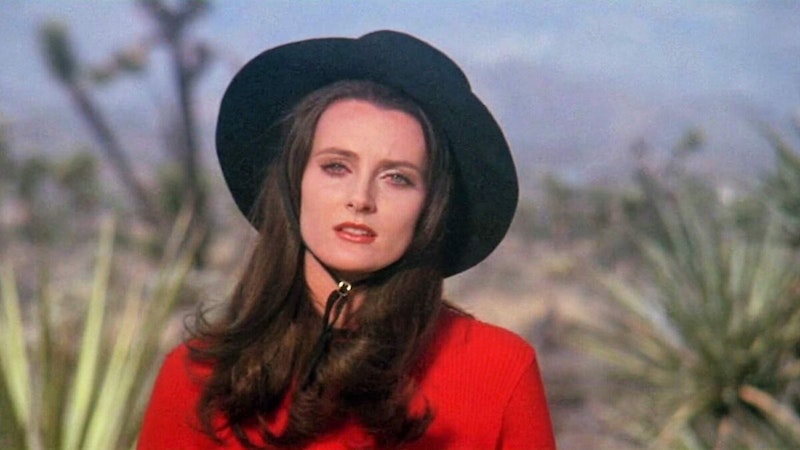 Stephanie Rothman’s 1971 Corman exploitation film The Velvet Vampire, coming to Shudder in November, isn’t the first female vampire film. But it’s perhaps the first vampire film that insists on addressing a primarily female audience. The movie’s iconic scene shows vampire Diane LeFanu (Celeste Yarnall) sitting in a sensuous red dress, one hand on a human skull. She gazes through a one-way mirror as her hippie house guests, Susan (Sherry Miles) and Lee (Michael Blodgett) have sex. The camera lingers on her rapt expression, with lips parted, and then zooms in to her eyes. The sex, the danger, the voyeurism of film, is all staged for a female gaze.

Rothman was one of the few female directors in Corman’s studio, or in Hollywood at the time. She’d had a hit in 1970 with The Student Nurses, a sexploitation romp which also explored female friendship, abortion, and immigration. Corman, with his usual capitalist instincts, wanted her to direct a Student Nurses sequel. Instead, she chose The Velvet Vampire. It’s a considerable departure, abandoning most pretenses of realism for a series of poetic fantasias in saturated color, set to ambient psychedelia.

The plot, such as it is, starts with Diane picking up sort-of free-love couple Susan and Lee at an art opening. When their car breaks down they’re stranded at her desert estate, where they have disturbing shared dreams of sex and seduction as Diane murders various minor characters off on the side. Eventually she lures both of them separately to her bed, killing Lee before Susan escapes back to LA, with Diane in pursuit.

The narrative, though, is less important than the symbolic set-pieces. In the first of these, Diane, in a leg-baring, scoop-necked red dress walks down a deserted street and is assaulted at knife-point. The would-be assailant throws her down, but her face never registers fear as she bites his hand and then stabs him with a concealed blade. She serenely washes herself off in the public fountain and checks herself for blood in her hand mirror. As the camera zooms in on her eye, we hear Johnny Shines performing his haunting “Evil Woman Blues.” It’s an abbreviated rape/revenge story, staged with stylized cool as the victim takes on the role of victimizer as easily as she changes from one fabulous outfit to another.

Rothman shuffles gender roles and gendered expectations even more assiduously in a latter seduction scene. Susan strips to her bikini and lies on the ground to get a sun-tan while Diane leads Lee into an abandoned bar, once used by miners in the area. As Diane cozies up to Lee explaining that miners didn’t just drink for recreation, a snake approaches Susan, and crawls up her crotch before she awakens. When she screams, Diane and Lee come rushing out, and Diane sucks out the poison from the bite on Susan’s thigh. Male betrayal and symbolic male sexual violence resolve into a pantomime of female/female sex and pleasure. Lee and the snake think they’re the predators, but it’s the girl who devours the girl.

Susan’s romance with Diane isn’t all live-saving blood-sucking in the sun though, and Rothman’s movie isn’t really about female empowerment in a straightforward way. Instead, it plays with the possibilities of female fantasies and roles. Women are stalked and stalkers, objects of desire (as the camera lingers on Susan’s breasts) and desirable subjects (as the camera lingers on perpetually shirtless Lee.) Most of all they’re watched and watchers. When Susan stumbles on Lee and Diane having sex on the floor, she doesn’t scream or reveal her presence, but stays to see. Lee’s oblivious, but Diane knowingly meets her eyes, watching her watching them.

“They’re your dreams, Suzy. How do you explain them?” one interlocutor asks Susan at the end of the movie. The Velvet Vampire isn’t just by a female director; it’s about the possibilities of female creation, spectatorship, and fantasy in a genre and an industry that haven’t allowed much space for them. Susan has to share her dreams with Lee; she doesn’t have a separate interiority of her own. Neither does he, though—their imaginations shape each other. The last image of the film is a close-up of her eyes, wide and staring. It’s not clear whether she’s horrified, delighted, aroused, or shocked. But she’s the one looking.