Is America who we are, right now, or is it around the next corner, on hold until a real rain comes, and washes all the scum off the streets? 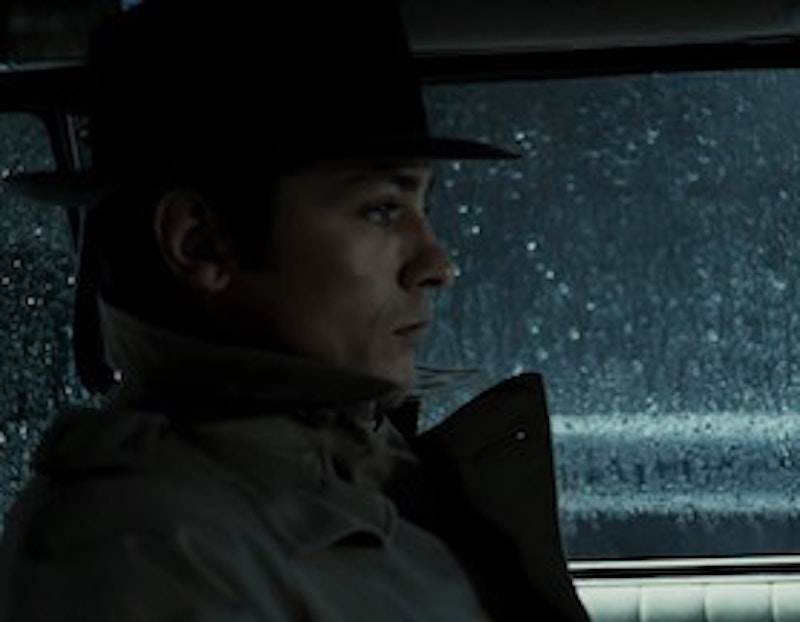 Last month, a friend wrote me that the French director, Jean-Pierre Melville, “is not cool. He’s embarrassingly not cool.” I knew immediately what this meant, because Melville made films about gangsters, gamblers, assassins, and the women who foolishly fall in love with them. In other words, Melville made noir. It’s a French word for a quintessentially cool American genre. And, in my friend’s opinion, Melville got noir completely wrong.

How is this possible? Why do the classics of New Wave French cinema, including most of the films directed by Melville and Jean-Luc Godard during their major periods, often look like clumsy parodies of The Big Sleep? Why do the French continually miss the mark in a genre their language not only invented, but then re-invented in 1955, when Raymond Borde and Etienne Chaumeton coined “neo-noir”? Why does Jean-Paul Belmondo, in Breathless, make faces in front of a picture of Humphrey Bogart, as if he somehow knows the noir elements in his story are all a big put-on?

The zones of darkness in noir films are not merely signs of encroaching danger; where the light and shadow intercross, there is a no-man’s-land that remains blessedly unclaimed, subject to no one. In American film noir, this twilight is a wilderness the hero calls home. There, in that liminal zone, he can live by his own moral code, despite all the vicious criminals, petty bureaucrats, and femme fatales who try to box him in. That’s why the hero’s office is always midway between light and darkness, and why the camera clings to drivers grimly risking the road in the gray, reflected glare of headlights. These are places of sanctuary, transplanted into the heart of the city from the American frontier. The protagonist is likewise always the shadow, and resurrection, of that other American original, the cowboy. But where the cowboy had infinite space, the hero in a noir cannot deviate from the half-light of the highway or his small, shabby desk. Evil lurks on both sides, hiding in plain sight where it is brightest, and then claiming its victims under the cover of night.

The tragedy of the American noir is the actions of principled individuals are dwarfed by larger engines of corruption; nonetheless, there’s optimism in the idea that for every wrongful death, you can save a few others, whom you care about as well, from the teeth of the combine. In Sin City, a film so noir that it’s almost a cartoon, John Hartigan sputters out the key line: “An old man dies, a little girl lives. Fair trade.” Sin City is fairly recent, but that fair trade is as old as Hank Quinlan, in Touch of Evil, dying to save Susie Vargas; it echoes Sam Spade’s furious assertion, from The Maltese Falcon, that “when your partner gets shot you’re supposed to do something.”

Doing something, however, is not a strong point of people in French films. Rather, it’s what the characters don’t do that makes them exceptional. The French idea of noir is that the unshakable composure of those American heroes, who have seen everything and are surprised by nothing, can be reduced to a pure and beautiful quality of indifference. This is actually far from true; Captain Renault—in Casablanca, a noir with camels—might as well be giving a lecture on the genre when he says, about Humphrey Bogart’s Rick Blaine, “My dear Ricky, I suspect that under that cynical shell you’re at heart a sentimentalist.” What excited French directors about American film was precisely the opposite: the possibility of escaping from sentimentality by dreaming up a character who doesn’t care.

This was already mapped out on paper by Albert Camus. His novel The Stranger adapts American hard-boiled fiction into a story about a man who doesn’t believe in marriage, God, or public acts of mourning. Following The Stranger, which hinges on a remorseless act of murder, Godard’s Breathless begins with the killing of a policeman by the putative hero. Belmondo’s Michel simply doesn’t mind having shot someone dead. To our mild astonishment, he freewheels around Paris, cadging money, resuming a casual romance, and thinking idly about going on the lam. Mostly he feels, keenly, the absurdity of his situation; when he’s sniffed out by the police, and shot in the street, he dies saying that everything “makes [him] want to puke.”

In Melville’s Le Samourai, the main character is Jef Costello, a hitman who has nothing but water, cigarettes, and a pet bird in his barren apartment. The most noble thing about Costello is, oddly enough, that he doesn’t care about his lover or anybody else. He uses his lover for an alibi, and tells her so to her face. He’s above sexual desire; when a pretty girl stops beside him at an intersection, he ignores her. He’s above greed, and shows no real interest in the wads of cash he gets paid, or the similar clumps of money he hands over to the silent guy who fences his cars. He doesn’t look an inch beyond the job at hand; when his target asks him what he “wants,” he replies, “To kill you.”

Through sheer impassivity, Costello manages to make both the police force and his underworld bosses look like hysterical busybodies. When he dies, it’s as if he never existed, which is the whole point of the film: to proclaim that Costello was, however briefly, detached enough to be a free man. The French New Wave, like every modern French avant garde movement, is obsessed with the acte gratuit, the unconditioned action carried out for no reason. That is why Michel, in Breathless, play-acts Bogart: nothing he does, right down to the look on his face, ought to be a matter of necessity. He’s making it up as he goes along; increasingly, Godard himself would start paring down his scripts, preferring to make his actors improvise, unshackling them from “story” in order to set them free.

This must’ve been wonderfully refreshing at the time; after all, France’s prior cultural moment was one of emotional saturation, where the excessive emotions of Jeanne d’Arc (The Passion of Joan of Arc) or Quasimodo (The Hunchback of Notre-Dame) blazed in defiance of the social order. It was thrilling for French directors to enshrine that same defiance, that same martyrdom, without a trace of schmaltz. But in order to create that effect, they had to radically misinterpret the American films they supposedly loved, ignoring the buried passions and wounded moral dignity of noir’sgood guys. To fully appreciate the irony, one has to go back to the term itself, with its strange suggestion of French darkness in an American landscape. Noir is always making the familiar foreign, recoiling from the idea that evil might be indigenous to America. A Mexican bomb drifts across the border, or a storied Maltese Falcon arrives in California; chaos ensues. It’s like Alicia Huberman says in Notorious: “I hate you all. And I love this country, do you understand that? I love it. I'll see you all hang before I raise a finger against it. Now, go on and get out of here. Or so help me, I'll turn you in.

Don't ever come near me or speak to me again 'bout your rotten schemes.”

The America that Alicia loves is pure, unspoiled, and a fiction. But without that fiction, our alibi collapses; by delighting in American cynicism, and removing the sentimental core, French films became the bad conscience of noir. What is America? Is it who we are, right now, or is it around the next corner, on hold until a real rain comes, and washes all the scum off the streets? The French, with artless cries of admiration, gave us precisely the answer we were hoping to avoid.