Dark Skies' low-budget aliens are scary because they're not convincing. 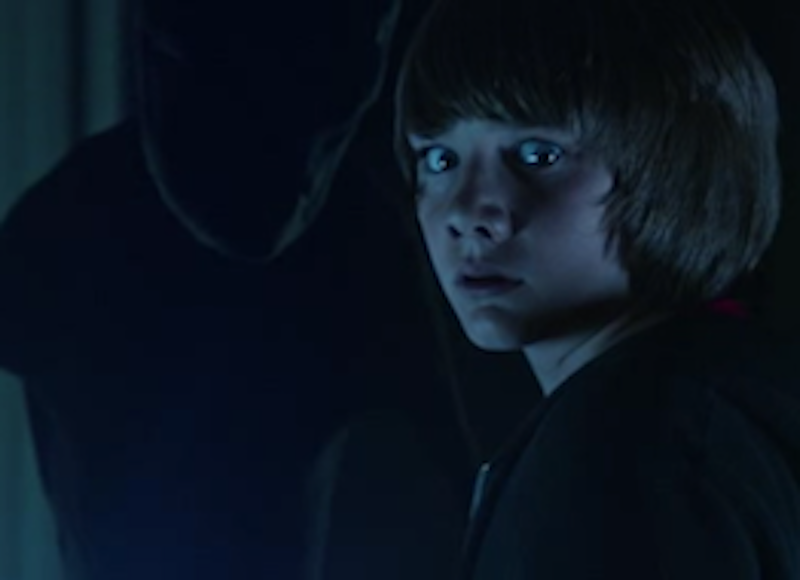 This is part of a series on Blumhouse horror films. The last entry on Truth or Dare is here.

"People think of aliens as these beings invading our planet in some great cataclysm, destroying monuments, stealing our natural resources. But it's not like that. The invasion already happened," alien expert Edwin Pollard (J.K. Simmons) explains in Blumhouse's 2013 Dark Skies. Pollard's right about viewer expectations. When you think "alien invasion film" you probably imagine spaceships, lasers, and elaborate prosthetics. Depicting an extra-terrestrial species and interstellar conflict is a big budget endeavor; Independence Day and Avengers ladle on the explosions, CGI and property damage, as befits the titanic apocalypse of two worlds colliding.

Dark Skies, in contrast, is alien encounter done on the cheap. The film doesn't even have the special effects budget of an X-Files episode. It’s set in the home of the Barretts, a typical suburban family with a boring life that doesn’t include any explosions. The alien invasion, instead, involves quiet, low-key semi paranormal activity. In the middle of the night someone opens the fridge and spreads the contents around the floor. On another night, all the family photographs are stolen. Daniel (Josh Hamilton), the father, gets a rash behind his ear. Young Sammy (Kadan Rockett) has an epileptic type episode where he pees in his pants, freezes, and then screams. That's creepy, but it doesn't require much in the way of CGI.  The aliens keep their invasion visually restrained.

Director Scott Stewart doesn't have spaceships hovering over the town because he can't afford it. The Barrett's home security cameras glitch whenever the aliens wander through the house because showing aliens wandering through the house would be too expensive. But this has interesting consequences for the story. Alien invasion narratives always play with the boundary between us and them. The War of the Worlds and all its heirs—including Independence Day—are reverse colonial fantasies. They ask an American or European audience what would happen if they did to us what we did to them. As a result, the aliens are also always the invaded; the colonizers we fight are us. All the special effects and make up are designed to disguise the fundamental fact that when we look at the aliens, we're looking in a mirror.

Without the CGI, though, that mirror image leaps out at you. Pollard tells the Barretts that the alien invasion already happened. He means that the alien Grays have been on earth for a long time, performing obscure experiments on unwitting families, implanting control modules, and stealing away children. But save for a fleeting shadow or two, you barely see the Grays at all. You only know they're there because the humans are acting in disturbing ways. But it's not really that unusual for humans to behave in disturbing ways. Which raises the question of whether the aliens have been here all along because they're just humans, and vice versa.

The film enthusiastically flirts with this reading. The Barretts are having family troubles, which could be responsible for the weird "alien" phenomenon. Daniel is out of work, and the consequent money problems have strained his relationship with his wife, Lacy (Keri Russell). They fight frequently, disturbing Sammy and his adolescent brother Jesse (Dakota Goyo). Daniel has a temper, and a disturbing control streak; he has taken a particular dislike to Jesse's best friend, a slightly older boy named Kevin (L. J. Benet.) As tensions mount, Daniel attacks Kevin—he's only pulled off by the boy's father.

Daniel's outburst of rage is provoked by the discovery of mysterious brand marks on Jesse's body. Daniel blames Kevin for them; we're supposed to blame the aliens. But neighbors and doctors think Daniel and perhaps Lacy are responsible for abusing their own children.

The film appears to reject this explanation out of hand; we know Daniel and Lacy, and they obviously care for their kids and would never hurt them. But how can we be sure? At times, after all, the parents behave as if they are not themselves. One of the most effective scenes in the film is one in which Lacy, a realtor, is doing a walk-through of a new home for a couple. In the middle of the pitch, she freezes, her eyes gazing into the distance, her hands clasping. Then she walks to a window and starts bashing her head into it, to the couple's horror. Lacy looks so nice and normal and professional—and then she's not. Is she herself? Is she someone else? Who can say what she'll do?

The real horror in Dark Skies isn't so much the fear of invasion as the intimations that the danger is coming, not from out there, but from inside the house. The climax of the film is supposed to be the moment when Jesse is whisked away in a flash of light, never to return. But the scene that has the most impact comes shortly before that, in a supposed dream sequence where Jesse sees his father holding a rifle next to the dead body of his mother. Dad blankly admits it's his fault, and then shoots himself as well—a domestic violence murder suicide of the sort that happens frequently without any sort of alien intervention. Maybe, then, the mundane dream is what really happened, and the elaborate, unlikely fantasy is just a fantasy.

From this perspective, the alien Grays aren't the villains of the piece, but an excuse. Pollard tells the Barretts that the aliens may be similar to scientists performing awful experiments on humankind—but if human themselves perform sadistic experiments, what do you need the aliens for? The half-assed special effects budget is, perhaps, half-assed because nothing special is happening. The small budget creates the possibility that the problem is small as life.

When Sammy stands in the park, opens his mouth and screams, maybe he’s possessed by aliens. Or he may be frightened because he realizes there aren't any aliens; there's just his dad. The skies are dark because nothing is coming out of them. We're the only ones here.