Everything William Bratton says in this movie is horseshit. B- 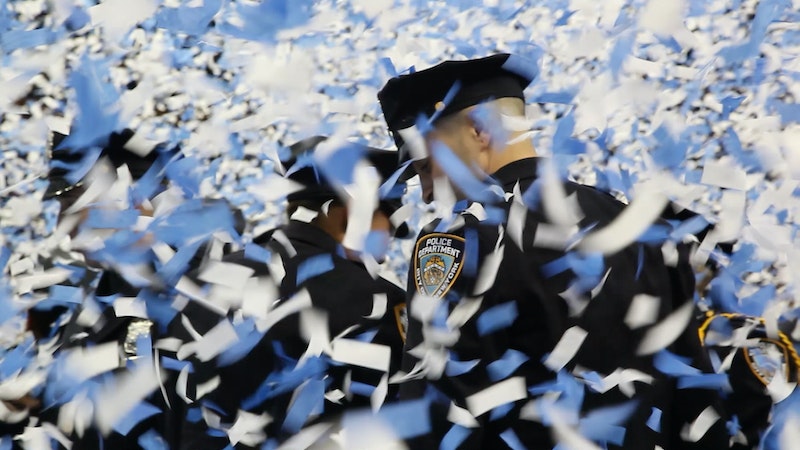 The documentary Crime + Punishment opens in 2014, with New York City Police Commissioner William Bratton proclaiming before a group of police academy graduates that their organization saved the city from the depths of criminality that engulfed it in the 1970s and 80s. Bratton, who previously held that post in the 90s under Mayor Giuliani, was a pioneer in statistics-based policing, combining data-driven policy with the broken windows theory as a philosophical basis for police work. This prefigured today’s cultural climate, in which we’re obsessed with “data” and “disruption” as solutions for our social ills in lieu of more obvious policies that would redress institutional inequalities. And just like “disruption,” everything Bratton says in this movie is horseshit.

The idea that “getting tough” on crime works is a barbaric fiction; crime went down in New York because of economic improvement, gentrification, and lower levels of lead in the water (seriously, that one’s important, lead destroyed generations of lower-class brains). In Crime + Punishment we see the harm of supposedly “objective” policing standards, how the very nature of the system means they’ll be enacted through racist and classist lens. There has been an official ban on arrest quotas in the city since 2010, but officer testimony and undercover footage in the doc show the pressure cops face to meet certain numbers. No matter what’s officially stated, more arrests and summonses equal more revenue for the department. More arrests and summonses will be found in “high crime” areas, i.e. poorer areas, i.e. areas where black and Hispanic people live. That’s the dark metric of institutional racism, the rot underlying all attempts at reform that fail to acknowledge it.

The movie intertwines several storylines. The main one features the NYPD 12, a group of police officers who file a class-action lawsuit against the city to expose the quota practices. Through interviews and hidden cameras, we see the retribution their colleagues bring against them. Rather than overt physical threats, they face disdainful freezing out. One man finds a picture of a rat-shaped parade float on his desk. One woman is driven into early labor by the stress, only for her superiors to coldly claim she’s making it up. Another plot thread demonstrates the effects of the policies in question. Teenager Pedro Hernandez, who was baselessly arrested eight times across 2015, was in prison during filming, awaiting trial on a fake gun charge. His family’s fight for justice explores a different facet of the criminal justice system. Moving through both stories is private investigator Manuel Gomez, who seems dropped out of a pulp novel thanks to his penchant for colorful quotes.

As of this film’s release, the NYPD 12’s lawsuit remains unresolved. Crime + Punishment can’t offer quick closure for anxious viewers, the way similar documentaries may seek to. People trying to change the system both within and without it work together on the case, but there’s no assurance that they’re on the right track to fix anything anytime soon. This isn’t an issue doc with an easy-to-digest action plan, but a survey of a problem whose scope is clearly even wider than it can cover. Paradoxically, accepting these limitations allows it to keep from overextending itself, resulting in a work that feels of a piece—a self-contained, troubling story about an institution wreaking havoc not because of corruption, but because it’s working precisely the way it was made to.