Into the Wayback Machine we go! 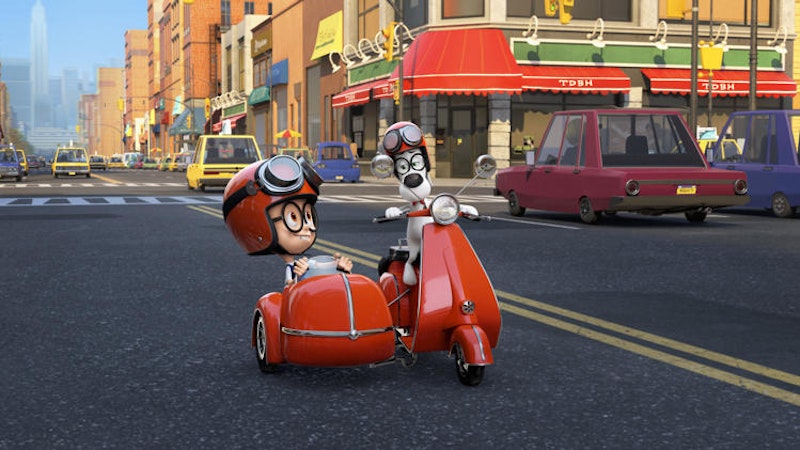 Truth be told, I never had much time for Mr. Peabody when I was a kid. His history lesson adventures were distractions I slogged through in order to mainline another daffy dose of Rocky the flying squirrel and his moose flunky, Bullwinkle. So it was bewildering to find myself nonetheless anticipating a feature film about the bespectacled, time-traveling talking dog genius, queuing up for tickets and 3D shade with my son, and thoroughly savoring the experience.

A modicum of bygone camp clings necessarily to Mr. Peabody and Sherman—the brainy canine and his red-headed human son reside in a swank, modernist citadel atop the Peabody Enterprise high-rise, and the time machine itself suggests Galactus' dislodged eyeball—but the movie is otherwise reasonably modern and blithely unbelievable. The plot, in case you didn't know: dog is unadoptable but turns out to be brilliant, adopts abandoned baby, invents time machine, befriends vast assortment of key figures from various epochs, becomes droll hipster ambassador to the future.

But a proper movie—even an adaptation of a dinky early-1960s cartoon—is nothing without drama, and a drama needs a monkey wrench. We get two here: a straight-out-of-Mean Girls brat who bullies the meek, bright-eyed Sherman for kicks on his first day of school, and Mrs. Grunion, a brute of a Children's Services agent who contends that a dog has no business bringing up a boy. I'm not revealing any spoilers when I say that through a serious of circuitous but not wholly unexpected events—the overall plot hinges, really, on Sherman developing a spine—our heroes find themselves careening through time bubbles to rectify an aberration initiated by pre-adolescent goading and spend the rest of the movie struggling to put things right.

These struggles are where the fun is had, as Peab, Sherm—and, yes, the Mean Girl—hob-nob madly through the space-time continuum. It's all a gas. They all narrowly escape the clutches of King Tut; they crash ancient Greece and hitch a ride in the Trojan Horse, where King Agamemnon and his troops are portrayed as frat boys; they drop in on Leonardo da Vinci and inadvertently coax his portrait model to smile (hello, Mona Lisa!) and crash his flying contraption. Crazily, the group almost succumbs to a black hole; even more crazily, there're a few minutes of freaky time-paradox hoo-hah that, in terms of a key conflict, occurs at the worst possible moment; that had me peering through my fingers.

All of this material is handled deftly enough that we're able to buy in fully despite the utter ridiculousness of things, and nothing feels overtly corny: Peabody's stilted love for Sherman; Sherman's fits and starts of rebellion and eventual confidence; da Vinci somehow co-conceiving of a way to re-power a highly sophisticated time machine; that weird, end-of-the-world situation late in the game when a wormhole opens up over whatever anonymous metropolis this movie is set in and threatens to puke every landmark and personage Peab and Sherm have enough met into the present day.

The action flows nicely even when it seems to tangle into a Social Studies improvisational jam session, the story rhythms jibe, and there's sufficient humor throughout to offset the unaddressed risk of gallivanting through time just because you can, something that's best left to Back To The Future anyway; one comes away with the warm fuzzies—especially if one catches it with a wide-eyed young child—blinking away the darkness of the theater and giggling inwardly at the idea of da Vinci grooving on Warhol's silkscreens while the Mona Lisa spray-paint tags a Florence studio wall like it was an NYC subway car.