But don't expect Americans to know any more about science. 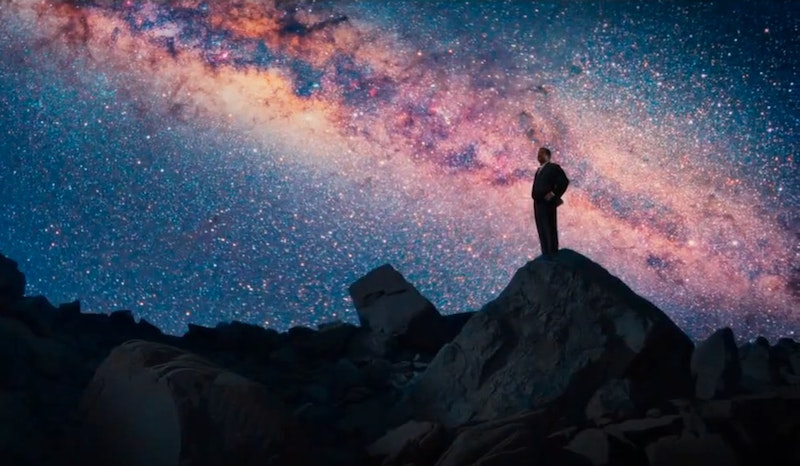 Despite a lot of hype, Sunday's reboot of Carl Sagan's classic Cosmos documentary failed to make much of a ratings dent. While Fox executives predict that more than 40 million viewers will end up watching the first episode sometime this week—whether online or through DVR—Nielsen ratings put Sunday's debut episode third at 8.5 million, way behind ABC's premiere of Resurrection (more than 13 million) and another boring episode of The Walking Dead (12.7 million).

It's fitting that a big budget journey to the stars—produced by Family Guy's Seth MacFarlane and hosted by Neil DeGrasse Tyson—couldn't compete with two mediocre dramas about the dead returning to life. After all, Americans aren't much for science. An Associated Press-GfK poll from 2011, for example, revealed that 80 percent of Americans believe in angels, while a more recent poll from the Pew Research Center found that only 60 percent believe in evolution. Tyson, like Sagan 34 years before him, wants to spark some curiosity in even the most anti-science of Americans—"there's another category of people," he told CNN's Brian Stelter, "the people who know they don't like science. They've got no flame at all. So we're going to go in there and light it." That's admirable, but I doubt it'll do much good. Even with America's particularly fanatical history of faith vs. science—from Jonathan Edwards to the Scopes Monkey Trial to In God We Trust to the Creationist movement—I think "Apatheism," as Jonathan Rauch once put it, is America's dominant religion today. 80 percent of Americans don't believe in angels because of some deeply-held theological beliefs, they believe in angels because, well, there's got to be something more than this, right? And besides, Touched By an Angel was a pretty good show. So I doubt Cosmos will do appreciably better at popularizing science than another CSI spin-off or Stephen Hawking's cameos on The Simpsons.

Still, this is a loving remake of Sagan's original, and the special effects are stunning—cinematography is courtesy of Bill Pope, best known for his work on The Matrix trilogy. In the first episode, Tyson takes us aboard his "ship of the imagination" to tour the Milky Way and beyond. He presents the "cosmic calendar," as Sagan did in the original, which spans the Big Bang (Jan. 1) to the present day (Dec. 31), where every month represents roughly a billion years, every day roughly 40 million. Tyson rightly rejects the argument that Cosmos' CGI extravaganza detracts from its science. As he told Fresh Air's Dave Davies, "I think if you have not thought deeply of how to communicate science you might get stuck saying, 'OK, I have to dumb this down. I have to be flashy but with no real content.' But if you really think deeply about the visualizations, the visual effects and the content, you get to have both."

Well said, unfortunately the animation—in a long sequence detailing the life of 16th century Dominican friar Giordano Bruno—stands out as remarkably dumbed down; totally goofy compared to the amazing swash through swirling galaxies and supernovae.

I applaud Seth MacFarlane for backing this remake but I hope the cartoons weren't his idea. Luckily it doesn't overly detract from what looks to be one of the most exciting TV events of 2014.

—Watch the first episode on Fox.com.