The HBO series harnesses the brainwashing power of the Internet. 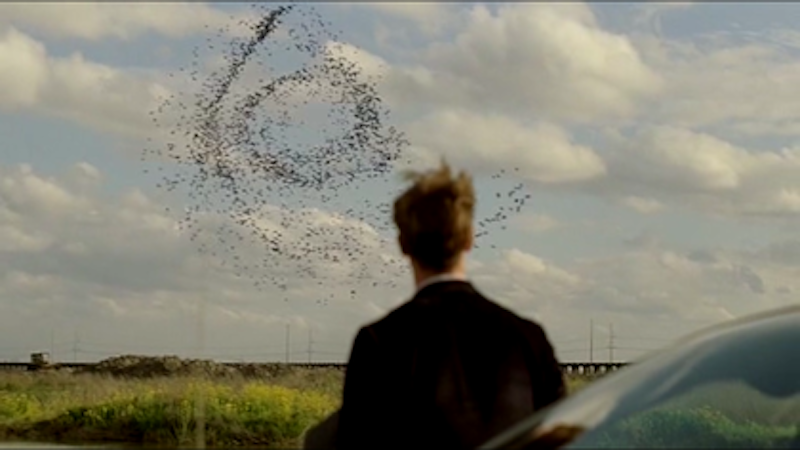 I remember, as a child, having to suffer through boring seminars on the danger of peer pressure. “Don’t smoke cigarettes or drink alcohol just because some other kids say it is cool,” a well-meaning, but embarrassingly out of touch police officer, motivational speaker, or homeroom teacher would tell a group of adolescents, who inevitably, smoked cigarettes and drank alcohol.

No one likes or welcomes a scold, but given that a new form of much more dangerous peer pressure is sweeping the country, a scold is exactly what the culture needs. The HBO series True Detective became a national phenomenon—the talk of Twitter feeds and coffee counters everywhere—because of its superb dialogue, excellent acting performances, and exploitation of the brainwashing power of social media.

The show’s first three to five episodes featured a rare combination of philosophical insight and suspense. Its mysterious plot surrounding the ritualistic murder of young women, possibly the result of a large conspiracy involving powerful religious leaders in Louisiana, and its complex and contradictory protagonists—Detectives Marty Hart and Rust Cohle, played brilliantly by Woody Harrelson and Matthew McConaughey, coalesced to create compelling television.

The mainstream web press and millions of viewers on social media quickly entered into a competition to determine who could make the most premature and extreme endorsement of the program, using as many superlatives as possible, and digitally replicate the group excitement of screaming groupies outside an Elvis Presley concert in the mid-1950s.

Andrew Romano, at the Daily Beast, began writing a weekly report on True Detective, often calling it the “best show ever.” After only three episodes, the Atlantic called it “the best show on television,” and at an even earlier point in the show’s eight-episode run, Forbes predicted that it will “change the way we watch TV forever.”

Before, during, and immediately after each episode’s airing, it seemed like the entire audience of True Detective took to their Twitter feeds and filled their Facebook pages with endlessly effusive praise for the program, comparing it to shows, like The Sopranos and Breaking Bad, that maintained high levels of quality over several years, not a couple of weeks.

At week six, True Detective transformed from an interesting character study to a mediocre police procedural. It was as if the series’ writer—Nik Pizzolatto—suddenly exchanged all of his Albert Camus books for Criminal Minds Season Six screenplays. The identity of the killer—something that the show endlessly built up—turned out to be an inbred lunatic living in the woods, and all the talk of “The Yellow King,” a frightening cult leader whose name was written in one of the victim’s diaries and who several characters referenced during the course of the investigation, evaporated into the air. One of the show’s most important details simply became insignificant without explanation. Is the Yellow King mythological? Is he alive? Is he dead? Is he something that slipped Pizzolatto’s mind because he had too much to drink when writing the second half of the season?

Another gaping hole in the plot opened up and swallowed Marty’s daughter. Throughout the first four episodes, the series went to incredible pains to imply that she was a victim of sexual abuse. She simulated a gang rape with her toy dolls, she drew pictures of men assaulting women in her notebook at school, and when she became a teenager, she became distant, morose, and sexually promiscuous. All of the scenes depicting the decline of Marty’s daughter were accompanied by ominous music, and several of them were followed by Marty and his wife speculating about the source of her depression. The was-Marty’s-daughter-sexually-abused angle went absolutely nowhere, also seemingly lost in Pizzolatto’s head, and helped confirm the early criticisms of the show from Emily Nussbaum, television critic for The New Yorker.

Nussbaum indicted True Detective for using all of its female characters as mere plot devices for the advancement of the male protagonist narrative. Every woman on the show, including Marty’s wife and daughters, were either murder victims or convenient props there for the convenience of the epiphany-seeking detectives. Unlike Nussbaum, I don’t object to True Detective’s reduction of women to cardboard cutouts on the ideological grounds of feminism, I object because it is weak, sloppy, and stupid writing.

As True Detective became weaker and sloppier each week, bizarrely, most critics and viewers increased their fanaticism for a failing show. Even the terribly lame season finale, with its 30-minute walk chase between the pony-tailed McConaughey and the hick child killer in a creepy maze, and its hokey and hackneyed ending—the big payoff to the series is that the brutally, but fascinatingly, bleak Cohle becomes optimistic—received absurd praise on the level of “perfect” (Daily Beast) and “superb” (New Republic).

Critics live and die by their acumen, and it’s one of rare bravery who will admit that a show he, in childish glee, called “the best ever” after a mere three weeks crumbled into a mess of clichés. It turns out that an even greater mystery than the identity of the child killer True Detective’s leads discovered by staring at a lot of computer screens, is why millions of people, on Facebook and Twitter, continued to call a show, clearly in decline, the best thing that they had ever seen.

Cass Sunstein, in his book Republic.com 2.0, undresses the flashy myths of the Internet’s impact on democracy. The web, according to Sunstein’s studies and research, encourages people to indulge in confirmation bias, seeking out only the information that reinforces their political beliefs and ideological tendencies. Sunstein also found that both liberals and conservatives became more extreme in their biases after spending time searching the Internet for information. Regardless of political affiliation, people will use the fiber optics of digital journalism and commentary to construct the barricades surrounding their bubbles. The universal need for belonging, manifesting in groupthink, also damages hopes that the Internet will influence people to become more pluralistic. Liberals, especially when expressing themselves on social media, do not want to risk the anger of the liberal herd, just as conservatives avoid inviting abandonment from the conservative pack.

Social media is a useful tool for turning anything—from a political speech to a viral video of cats—into a global phenomenon. The unending hype and enthusiasm surrounding True Detective, and the refusal to acknowledge its inconsistencies and weaknesses, indicates that American culture has declined to the point where people would rather participate in a phenomenon than criticize, or even understand it. The same foibles of human nature that Sunstein accurately predicted would cause the Internet to worsen political polarization and ignorance are now dulling the critical thinking of the masses, and interfering with the way that people consume and interpret art and entertainment. Someone interested in television drama no longer watches TV, but watches a television show that hundreds of their “friends” have already recommended, praised, and incorporated into their social media activity and community.

One of the problems with social media is that, under the guise of empowering the individual and feeding into narcissism, it collects every experience in life. Its most avid users are not content until they share with their “friends” photo documentation of every meal, vacation and event. They’re not satisfied until they offer commentary, and receive replies, on every idea they encounter and every product they use.

The danger is that it now fundamentally changes the experience of consuming art from an individuated opportunity for introspection into a collective measurement of social inclusion and cultural awareness.

Most Americans freely submit to the state of self-surveillance, broadcasting their lives for the consumptive enjoyment of as many “friends” and “followers” as possible. Once art becomes subject to the low standards of social media, where political activism with websites like Upworthy and corporate marketing for enough products to fill the aisles of an endless supermarket already live, it will become as boring as the average person’s Facebook page.