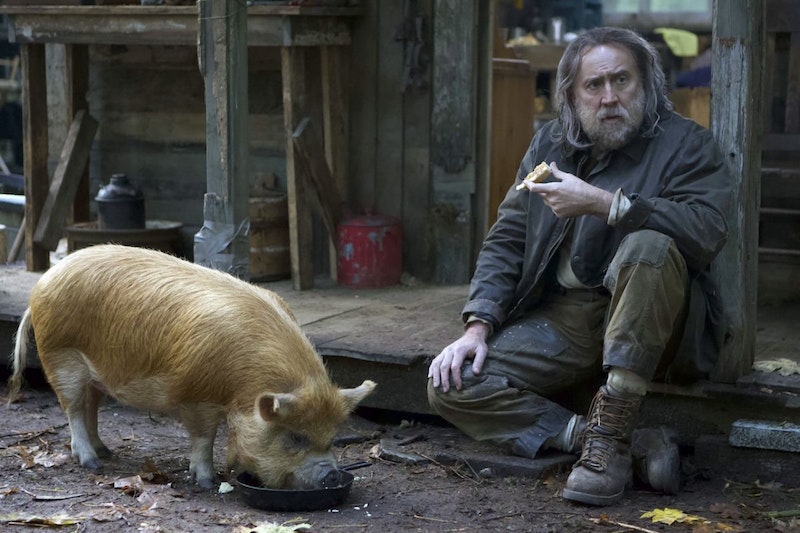 “Someone stole my pig.” It’s happened to all of us. Michael Sarnoski’s Pig, out now in theaters, is a gorgeous-looking film, with compelling performances, sterling production design, daring editing choices, and an irredeemable script. The dialogue isn’t bad—far from it: Sarnoski’s characters speak with clarity, never unloading exposition or nauseating cliches. And he directs well, because everyone in this movie, Nicolas Cage included, are operating in a different register than anything else I’ve seen them in. I could go on and on, and will, about everything I love about this movie, but they’re all technical aspects. I can’t take a film, no matter how beautifully made, that rings totally false.

The trailer for Pig made it look like something I should avoid, so I made a point of seeing it. 92-minute runtime didn’t hurt, and for all of its problems, its craft is compelling enough that I can’t dismiss it entirely (like Roadrunner: A Film About Anthony Bourdain, with director Morgan Neville’s indefensible use of an AI generated Bourdain voiceover). The trailer begins with Cage in full Mandy mode, living in the Oregon woods, dissolute, silent. His only companion is a truffle pig. She helps him find particularly delicious truffles that he can sell to effete Portland foodies and their junkie middlemen.

Echoing Kelly Reichardt’s First Cow, this pig with the gold snout is pig-napped, and Cage is beaten unconscious. Cue to a montage, we see Alex Wolff from Hereditary pop up, we see Cage in full Mulholland Drive dumpster-man mode talking to fey chefs in fancy restaurants, we hear him tell someone “We don’t get very much to care about.” PUKE! But when delivered by a fucked-up forest monster Cage, it’s fine. I don’t buy it, but it works.

My problem with Pig is its saccharine sensibility. Cage’s character, a former top chef named Robin Feld, went to go live in the woods after his wife Lorelei died in 2004. We never learn how she died, or why Feld could no longer take human society. He works with a buyer named Amir (Wolff), a city kid in a skinny suit with little respect for the stern, silent, and smelly Feld. But they have a business relationship, things are kosher (so to speak). When the pig’s stolen, Amir reluctantly takes him on a journey to Portland to find her. Amir’s worried about his reputation in the city (“People talk”), and particularly about being seen at a restaurant that his dad (Adam Arkin) owns.

As they move from kitchen to table to secret fight club (come ON!), Feld and Amir open up to each other. Feld, despite his appearance, is curious and generally friendly, and he asks about Amir’s mother. “…She killed herself.” He remembers how one night his parents went out and instead of viciously fighting for hours when they got back, they couldn’t stop taking about the meal they had, and how amazing it was, and how they’d tell this story over and over and over again. Naturally Feld cooked that meal: he remembers every meal he ever cooked for someone else.

Editor Brett W. Bachman frequently cuts in the middle of a sentence, or a syllable, or just a little sooner than one expects. Along with Sarnoski and cinematographer Patrick Scola, they’ve made a movie brimming with dread and pain that never needs to be spelled out or clarified. Two scenes stand out, and they’re particularly well done considering how often these kinds of scenes are used and abused: one, Amir’s mother didn’t kill herself, at least not successfully. He goes to visit her in a hospital where she lives as a vegetable. A nurse asks if he wants to see her, since she was “just about to clean her trachea out,” and Amir simply stands in the open doorway. Cut to an extreme close-up of the side of the woman’s bed, her nearly lifeless body out of focus but huge in the frame, a machine breathing for her, and her son standing helpless in the doorway. He leaves, end of scene. It’s a stunning visual sequence, but that doesn’t matter, because this movie is bullshit!

Feld’s the mouthpiece for a familiar and tedious climate fatalism that feels specific to the Pacific Northwest. In the restaurant that Amir’s dad owns, Feld confronts one of his former employees, then a line cook, now a sous-chef. Recalling Jeff Bridges in Fearless, he looks at this man and tells him straight up that he’s living a lie. “You wanted to open a pub. Why are you doing this? These people don’t care about you. They don’t care about your food. This isn’t what you wanted to do.” He protests, melting with embarrassment, stammering that “no one wants a pub around here.”

With Moses-like clarity, he gives the same business to Amir. “Your dad doesn’t sound very supportive. Why won’t he help you?” Amir’s also living a second-hand life, and the ineffectual cosmopolitan foil for Feld’s noble savage. That dichotomy is part of what’s so on the snout about Pig: modern man has ruined Earth, and there’s nothing we can do about it—the film stops short of blaming individuals for buying plastic water bottles over the corporations that produce them, but this is the kind of “bourgeois climate eschatology” that came up on Red Scare a couple of years ago: Cage’s pivotal speech in Pig is about how the west coast is due for a big earthquake that “will flatten everything, and anyone that survives will just be waiting, and then they’ll look up, and they’ll see a wave ten stories high.”

Sarnoski’s consolation? Follow your dreams, find something or someone to care about. Fuck off. You’re gonna tell me there’s an inevitable apocalypse “coming soon” and then suggest nothing more than befriending a magical fucking pig? No! The pig isn’t even magic! “She didn’t help me find the truffles, you can tell by the trees.” Amir asks why he wants to find her so badly. “I love her.”

Another crucial scene between Feld and a former friend is played out in two shots: a long wide shot with the other actor’s back to the camera. We watch her and Feld reminisce; he asks her if she still makes her “famous salted baguette”; she does, she gives him some. Cut to a medium shot of Feld leaving, and his friend telling him something off camera. To stage this kind of scene, coming towards the end of the movie, with such distance and formal remove, is remarkable (I wonder if she was pissed her face isn’t in the movie). But once again, this all leads to a ridiculous daddy issues confrontation at Amir’s dad’s house, where Feld cooks for them, does his best to get the guy to give him his pig back, but then breaks down, and admits that the junkies that took the pig “were too rough with her… she was a waste of space by the time I got her…” at this point, the soundtrack cuts out to a low-end whoosh as Feld lets out a violent scream we can’t hear and falls to the ground.

Now, keep in mind, the guy crying over a nice meal about the wife he never cared about and the son he doesn’t respect, is the same guy that the day before offered Feld $25,000 to leave him alone, “or things will get very messy for you.” Despite its impressive visual design and pacing, Pig doesn’t amount to much more than its cloying conceit, or its silly poster (what is this, a Sunn O))) album?). The paralyzing combination of manic fatalism and regressive, sophomoric “solutions” here is instantly recognizable, and it’s a pernicious strain of thought: one that explicitly states that the world’s ending, there’s nothing we can do about it, so let’s turn inward and don’t worry be happy. Unacceptable.