The Quibbits Go Back to the Movies

With the help of Wally Coyote, the Marshfield Mariner, and Hanover Mall Cinemas 10. 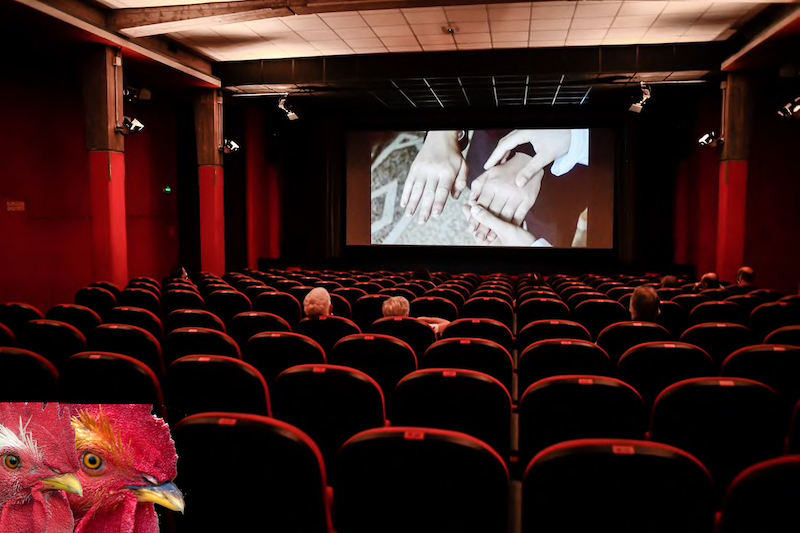 Monica and I went back to the movies yesterday. She insisted, I resisted (as always). “Roo, we haven’t been out of the house in three straight weeks and I want to take advantage of this soft reopening before the country closes down again.” I asked her when that was going to happen and how she knew. “Don’t worry about it honey, let me get you your heroin.” I told her I didn’t need any today and to stop asking me. “You’re cranky. It’s probably because you haven’t fixed.” I’m beginning to think my wife wants me dead—or, not her, but whoever she works for.

I don’t think Monica ever gave up that shady paramilitary stuff, all the times she wrote in the articles covered in [REDACTED] this and [REDACTED] that. I turned to her and saw a stranger for the first time in my life. All of a sudden this wasn’t my wife: this was Courtney Love, this was Jennifer Chiba, this was Nurse Ratched in my home. I mumbled something about Cheerio’s and said I wanted to see a movie.

“Let’s look in the newspaper for showtimes.” I reminded her that the local newspaper (The Marshfield Mariner) stopped printing movie showtimes years ago. “Fine, Google it.” I told her my computer was upstairs. “Well go up and check!!” Yes ma’am… marriage is about compromise. Anyway, I printed out the entire schedule for the day. Monica asked what was on offer, and I told her not much: Black Widow, The Boss Baby: Family Business, Escape Room: Tournament of Champions, Old, Snake Eyes, and Space Jam: A New Legacy. “What are you talking about, Roo? I want to see that movie Old. I hear they all get old. That’s cool, let’s go.”

Hanover Mall Cinemas 10 (formerly managed by the Patriot chain) is around 10 miles from where we live, so we had to leave a bit early as Monica only had her motorcycle (Bennington took the car—asshole). We were zooming down Washington St. when I saw an old friend: Wally Beaver, a coyote I met in the war (Korea). I told Monica to pull over, she ignored me, I told her again to pull over, she ignored me again, so I spur-clawed the back tire, causing the bike to spin out, and she crashed while I jumped up to meet my friend. I hadn’t seen Wally in at least 30 years, and he looked pretty good for a mangy mammal. He asked if my wife was okay, I told him yeah sure whatever and asked how his life was, but he persisted: “That looks like a really bad crash… isn’t it on fire now?”

I turned around. Yes it was. But my wife wasn’t in sight. I’m sure she just wanted to make the movie. I told Wally as much and he cocked his eye—we had a nice conversation but Wally’s not one for bullshit, and he knew I was lying when I said my marriage was perfect and that I wouldn’t change a thing. I would change a thing—a few things. Monica’s too mean to me. She takes me for granted. She’s also not around when I need her the most. Anyway, she probably has just as many complaints about me. Again, Wally looked nonplussed, and he continued to grow weary of our conversation, and just as I realized I was wearing out my welcome, I also remembered that Old was starting in 20 minutes and this far away, I’d never make it. But Wally offered me a ride. “Get in,” he said, “I still have the Alfa Romeo you bought me in ’75.”

On the highway, I asked Wally what the hell he was doing in Marshfield. “Business. You know. He turned to me.” I told him no, I didn’t know. “For the agency.” Ah. I understood. Okay, great. This really wasn’t what I needed or expected, and that, ultimately, is what matters to me most. I spent the rest of the ride in as much silence as possible, unwilling to reminisce about our time killing hostiles in Asia, back when we were friends. Blood brought us together, and now we have nothing left. I asked Wally if he’d been back to the movies yet. “Nope,” he said, “Haven’t been to a movie since Diane Kruger got killed before Hitler in Inglourious Basterds.” I asked if he had perhaps heard of M. Night Shyamalan’s new movie Old. “He’s still around? Jesus. Why?” I told him Shyamalan has had a resurgence—not critically, but at least the people like him. “What do they know…” Wally looked forward and said nothing for the rest of the drive to Hanover Mall.

I met Monica in the theater five minutes before it started. I got her a large popcorn and a Coke, which she took to be a statement on her weight, and promptly threw it on the ground. There was no one else in the theater so I just sat down, once again in silence. People make life so hard sometimes. The movie started and about half an hour in I saw Monica slip under her seat and onto the floor. She was crawling around pecking at the ground trying to eat the popcorn that she’d thrown everywhere. Then I heard the sucking sounds: she wanted her Coke. Who doesn’t? We love going to the movies.

“I want to go to that beach. Like right now.” I really think my wife wants me dead. She’s not trying to kill me (I don’t think), but I think she wants me dead. “Roo, you’ve been working really hard lately,” she said (false), “Why don’t you look up where it is? You can take a solo trip. Take the squirrel you were fucking last summer with you.” She always gets petty when she’s hungry. She and I knew there was no such beach, it was time everywhere on Earth that made you old. At least we’re getting old together. For now.