In the Realm of the Sacred and Profane Eros 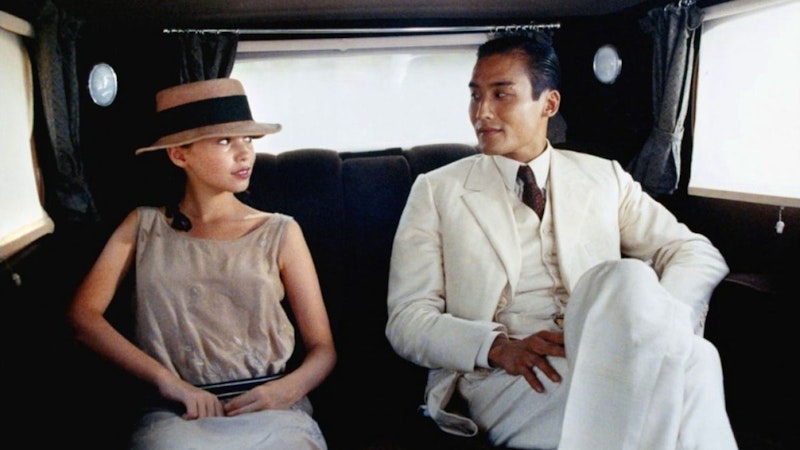 Duras had an unconventional life. She was born in colonial Indo-China (today’s Vietnam) and these roots remained with her all her life.  Everything she did, everything she wrote was connected to the place she grew up in despite the fact that she would spend most of her life in France. Her family moved to Saigon because of her father’s work in education but he died when Duras was very young. This sad event made an indelible mark on her life, especially since she was now left and confronted with her authoritarian mother (all of these events are implied in her book). As Laure Adler writes in her autobiography of Duras, “To Marguerite, the death of the father was more like a continued absence than a sudden tragedy. The mother was already alone, with her misery, her world weariness and her endless problems. What was the point of struggling? Marguerite’s mother loved misfortune, and misfortune smiled down on her like a beneficent and perverse lover.”

French director Jean-Jacques Annaud was taken by Duras’ story and adapted the book into a film, The Lover (1992). Its main players, “The Girl” (Jane March) and the “Chinese businessman” (Tony Leung Ka-fai), meet on a ferry crossing the Mekong River. She’s going to Saigon to the boarding school, and accepts a ride from the Chinese man. The Girl is young, 15, but she lies to the man and says she’s 17. She wears a man’s fedora, and a dress, and has rouged her lips with her mother’s lipstick. Although she’s not seducing the Chinese man like Nabokov’s Lolita, the Girl is irresistible as a nymphet. Much like Nabokov’s novel, this presents us with a dilemma: is this a moral film? A moral book? Can we evaluate this aesthetically given the plain details of age difference?

This seemingly uneven relationship between the Girl and the Chinese man embodies the meaning contained in the private sphere of lovers. When together, they’re shut off from the world, free from morality or judgment. It’s in this untouchable sphere that the vulnerability of the erotic self is revealed. The sexual revelation isn’t necessarily seen in the literal nakedness but in the metaphysical nudity. The lovers are known to each other in a way that’s only known to themselves. Annaud presents this as a complete and fulfilled understanding between the two lovers, as does Duras. They abandon themselves, and because of this, they experience a sense of self-annihilation, something Georges Bataille called, “a little death.”

The most singular aspect in Annaud’s interpretation of Duras’ book is the fact that the language between lovers is not literal but bodily. The caress, the touch, the embrace, the kiss—all of these are not only singular events but also singular metaphysical characteristics. Annaud and Duras want us to think about the difference between being nude and being naked.

In their book, Being Nude: the Skin of Images, Jean-Luc Nancy and Federico Ferrari write, “Intimacy, which is innermost and most deeply hidden, becomes the surface. The interiority of this nude is the surface incarnate. The nude is spread across the surface of the painting. The eyes are closed, the muscles relaxed. This is abandon, complete exposition to others. Without this complicity, without this trust in the other, without this unreserved letting go, the nude could never be incarnated in its reality. The incarnate is the subject that withdraws; those are its eyes that close, making it so that only skin is exposed, defenseless, to the gaze and the touch of the other. The incarnate is the threshold of eros.”

In the same way, Annaud chooses to show that the Girl and the Chinese man exhibit this trust only possible in extreme privacy of the erotic. Both lovers see one another as the ultimate other, and it’s in this otherness that they become whole, even for a small moment of intimacy. They seek to leave their fragmented life, and search for the final piece of this metaphysical puzzle, which will continue this passionate affair. “Very early in my life, it was too late,” wrote Duras. The lovers know that the mystery of such strange love is over before it begins.