What Journalists Can Learn from The Night Stalker

The 1972 vampire movie is more relevant than CNN. 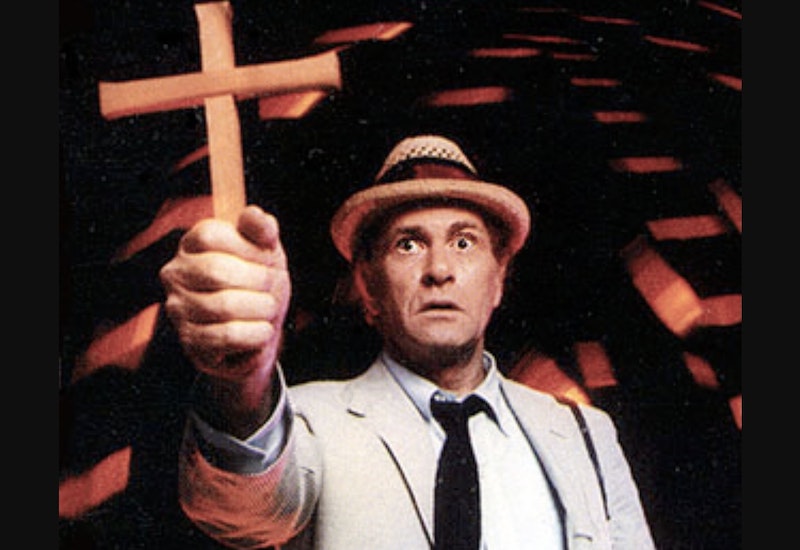 Several years ago when I taught a class in journalism, I always showed the class two movies: All the President’s Men (1976) and Shattered Glass (2003). All the President’s Men is the Big Bang of the modern journalism age, Woodward and Bernstein’s harpooning of Nixon the story that launched thousands of journalism careers. Shattered Glass tells the story of Stephen Glass, the fabulist who made up stories and got rewarded for it by liberals at The New Republic. That is, until Glass got caught.

To that list I would add The Night Stalker. The 1972 made-for-TV movie was reissued on Blu-ray in 2018, and re-watching it again for the first time since I was a kid was a revelation. As the film historian Tim Lucas, who does the audio commentary for the recent edition, puts it, The Night Stalker “is one of our great vampire movies, precisely for the reason that it is a good deal more than that.”

The plot is summarized well from the TV Guide entry at the time: “A disgruntled reporter in Las Vegas stumbles upon the supernatural when young women are found dead and drained of all their blood.” The script by legendary writer Richard Matheson (The Twilight Zone) was based on a novel manuscript entitled The Kolchak Papers by Jeffrey Grant Rice.

At the film’s start, reporter Carl Kolchak (Darren McGavin) sits alone in a small and cheap hotel room listening to himself on tape recount a story. The story: After a series of murders of young women on the Las Vegas strip, murders in which the victims had tooth marks on the neck and massive losses of blood, Kolchak suspected that the killer was a vampire. Through his many contacts, Kolchak tracked down Janos Skorzeny (Barry Atwater), a 70-year-old Romanian with superhuman strength who only went out at night. Kolchak and the police found Skorzeny at his home, and dispatched him with a wooden stake.

When Kolchak wrote up the story, he was blackmailed by the police and Las Vegas politicians. Fearing the public reaction, they wanted to make sure the piece never saw the light of day. “We are supposed to print news, not suppress it!” cried Kolchak, a kind of 1970s Glenn Greenwald. Forced out of town, Kolchak is putting it all in a book. The truth is (The Night Stalker was a main inspiration for The X-Files) is going to see the light of day.

Carl Kolchak might seem crazy, but as Lucas observes in the audio commentary, “pause to consider what historians now tell us about what was really going on between the White House and journalists at this particular time.” It was a paranoid time in the United States, but people were afraid for good reason. Lucas cites Poisoning the Press, Mark Feldstein’s book about Richard Nixon and the media. Nixon planted stories and letters in the press to try and undermine the reporting of Jack Anderson. The President even considered plans to poison Anderson. “Ratfucking,” the precursor to today’s opposition research, was destroying lives.

America in the early-1970s was the time of Vietnam, Watergate and Robert Altman’s Nashville. Like Nashville, The Night Stalker is both “anti-establishment and pro American Dream.” It fits into the “shadow cinema” of the 1970s, movies that were countercultural while also celebrating the values of more traditional and patriotic Middle America. Authority everywhere was eroding, but people still loved the country.

Kolchak is a perfect character to represent both sides. As Tim Lucas notes, the reporter “appeals to both sides of what was then called the generation gap.” In Kolchak, “there is something of the countercultural reporter. He’s not just filing his stories, he’s finding the stories of coverups approved by the local police and government.”

Yet Kolchak also has a conservative cynicism: “He’s not just doing this to tell the truth, he’s doing this for reasons of self-interest.” Like Glenn Greenwald or Tucker Carlson, Kolchak has been fired from several places, “all presumably for trying to get the truth past his editors.” Kolchak, who is “hell bent on getting the last laugh and coming back in style,” is “a charismatic grab bag full of contradictions, panache, [and] bad taste.” He doesn’t like authority but has “an all-American love for the goddam capital-T Truth.”

Lucas speculates that had they remade The Night Stalker in the 1990s, Kolchak could've been played by James Woods or Dennis Miller—both conservatives. Indeed, in 2021 the roles of the corrupt politicians, censors and extortionate fixers are now played by people like Joe Biden, Kamala Harris, and places like The New York Times and Facebook. These are the lairs and ghouls who promote fake news like the Russia collusion hoax, and suppress uncomfortable stories such as the laptop of Hunter Biden—a character who, with his addictions, resembles nothing so much as a modern vampire.

When the demon Michael Avenatti, who’d try to suck Donald Trump’s blood and—full disclosure—accuse me of running a high school drug and gang rape cartel, appeared in 2018, the one reporter who saw his true nature was Carlson. Carlson called Avenatti out in one famous interview, but there was a smaller, but even more telling encounter. Carlson said that when Avenatti showed up at the studio, one of Carlson’s producers “felt the hair on his arm stand up.” Carlson claimed that in all his years on television, he’d never seen anything like it. Carlson, like Kolchak (and unlike any other reporter in the media) knew what he was dealing with.

Finally, early in The Night Stalker there’s a scene that the media today should consider with genuine seriousness. Kolchak is talking to all of his contacts—doctors, cocktail waitresses, cops. He has great sources. As a result, he’s the best, most connected reporter in Las Vegas. As Tim Lucas notes, there can only be one reason why. “They must all feel like he has represented them fairly and squarely in the stories he has done in the past.”