Woodstock '99: Peace, Love and Rage is a fine documentary about a festival that went horribly wrong. B 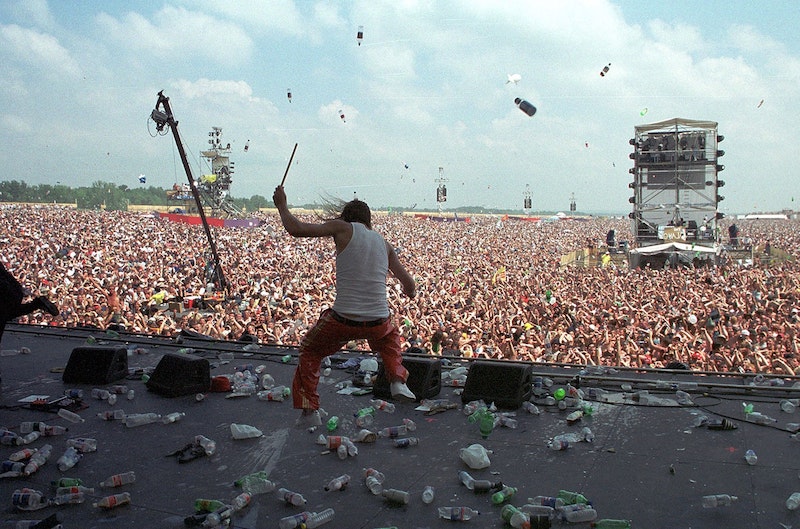 If there was one cultural tendency about the 1990s that was excessively tiresome, it was the constant need to compare the 1990s to the 1960s. Perhaps it's a function of my age, having gone to college in the late-90s, when my parents and those of most of my friends were our age in the back half of the 60s.

But it was a frequent topic of discussion back then, the idea that the late-60s was when it really mattered, compared to the insubstantial goings-on of Gen X, 30 years later. The Boomers originated this idea, but a lot of my generation internalized it. The nadir of that was Woodstock '99, the music festival that took place in upstate New York in the summer of 1999. Following a relatively successful 25th anniversary festival in 1994, featuring a combination of original Woodstock performers and more contemporary acts, the organizers planned to do it again in 1999 for the 30th.

The result was a lineup built around rock acts popular at the time—Limp Bizkit, Rage Against the Machine, The Offspring, and Kid Rock—which mostly attracted a young male audience that was into that sort of thing, something far away from the ethos of the original Woodstock. The result was bad: Fights, numerous sexual assaults, a series of fires, and the death of one young man. It represented one of rock's greatest debacles—much more Altamont than Woodstock, and also a forerunner of the Fyre Festival, except that it actually took place.

That festival is the subject of Woodstock '99: Peace, Love and Rage. It's a new documentary, debuting on HBO this week, which looks back at the Woodstock debacle with a couple of decades worth of hindsight. The talking heads interviewed disagree on whether Woodstock '99 represented a betrayal of the legacy of the original Woodstock, or if Woodstock '69 itself was merely creation of Boomer myth, as that event that contained plenty of chaos itself. The year's best music documentary, Questlove's Summer of Soul, also represents a challenge to the foundational myths of Woodstock.

Yet the pop culture of the time was all about male anger and aggression. It was the time of Nu Metal, Limp Bizkit and Kid Rock. The Columbine massacre was in the spring of that year, and Fight Club followed a couple of months later. The Britney Spears documentary earlier this year shined a lot on just how screwed up the culture was in those days, especially when it came to gender, and this is more for that particular pyre. Two years later came 9/11, which brought the culture into a different era, though not necessarily a better one.

The Woodstock documentary does a good job exploring that dynamic. It may be modern sensibilities talking, but Woodstock '99 repeatedly tees off against toxic masculinity and bro culture, two terms that weren't popular in 1999, but represent what was happening at that festival, from the frequent groping to the mass idolatry of a dolt like Fred Durst. Kid Rock, apropos of nothing, declares from the stage that Monica Lewinsky is a "ho," and Bill Clinton "a pimp."

Unlike Summer of Soul, which showed a reverence for the vintage music performed, Woodstock '99 has nothing but contempt for most of the acts that were featured there, and cuts away from most of the performances after 30 or 45 seconds. The film also depicts an era that was pretty much the last gasp of MTV's influence over music and pop culture. In one moment that represents the film in microcosm, we see a young man angrily berating an MTV reporter because he can't believe the Backstreet Boys are beating out Limp Bizkit in the daily Total Request Live countdown. I'd ask why that kid should give a shit about something so inconsequential, but that's the sort of misplaced rage that, 20-odd years later, finds a place on Twitter every day.

The film lets the promoters and organizers off the hook. These people screwed up massively, yet the documentary doesn't make their misdeeds any kind of focus, nor does it make any one particular person, or group of people, the face of the disaster. The promoter, John Scher, is interviewed, and frequently comes across as a defensive jackass. When he's not blaming victims for their own sexual assaults, he's claiming the festival actually went well except for MTV making them look bad, apparently by noticing the aggression, assaults, and fires and pointing their cameras toward them. But it's possible the filmmakers held their fire, out of appreciation that he agreed to participate.

The rioting, meanwhile, didn't have a political element to it, aside from dissatisfaction with the conditions on the ground, and the greed of the promoters. The documentary punts when it's time to feature the performance by Rage Against the Machine, one of the only acts at the time that had a vocal political point of view.

Woodstock '99 is the first in a series of music documentaries called "Music Box," which was developed by former ESPN personality Bill Simmons, as part of his production deal with HBO. Simmons previously spearheaded ESPN's great 30 for 30 series, and Woodstock '99 is a good sign that the series will be worthwhile.