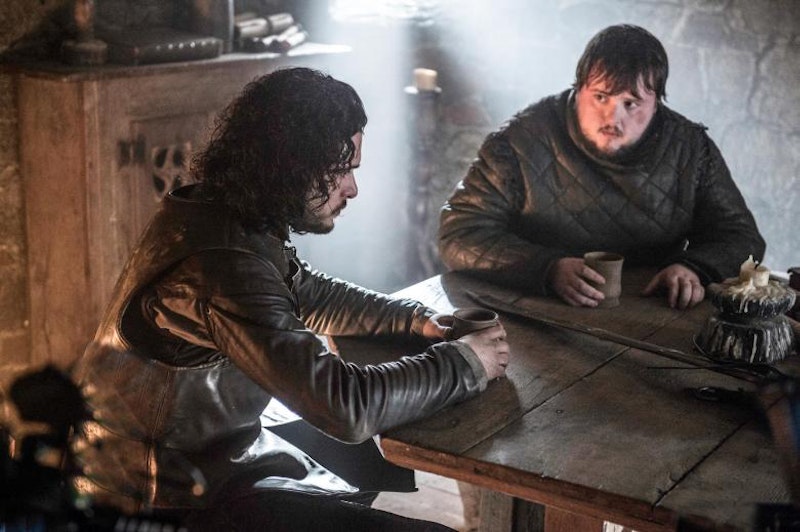 “Jon Snow is dead.” At least according to David Nutter, who directed Sunday’s season five finale. Most GoT fans, however—myself included—aren’t convinced. It’s too convenient that the Red Lady should arrive at Castle Black shortly before Ser Alliser Thorne, Olly and some other angry men of the Night’s Watch decide to do-in Jon like Julius Caesar. And since last week’s sacrifice of Shireen didn’t exactly have the intended consequences (with half of Stannis’ army deserting before his disastrous attack on Winterfell), maybe the Lord of Light requires a life for a life—much like the Many-Faced God of Braavos. Vanity Fair’s Joanna Robinson has a lengthy run-down on what the books tell us about the Red Lady (because if we’re just going by the show, it’s not much).

If Jon really is dead, I don’t know how GoT keeps the Castle Black story going. Sam has been sent off to the Citadel to train as a maester, and no one else in the Night’s Watch is a legitimate character. Sure, the Red Lady and Davos are there, but neither one of them needs to be (though I’m thinking Davos may join the Night’s Watch because he has nothing left). It’s possible that the White Walkers will attack Castle Black at the start of season six, but GoT isn’t really ready for that (that’s really an end-of-the-series-type confrontation). Also, does the Night’s Watch think they’re ready for a fight with the newly-freed wildlings? They have a giant after all.

Jon’s death though was just one of many. Brienne comes upon a badly wounded Stannis in the woods near Winterfell, after the Boltons defeat his army. She finally exacts her revenge for Renly’s murder—“Do you have any last words?” A resigned Stannis looks off. “Go on, do your duty.” Yet Brienne failed in her oath to Lady Stark. Sansa uses the battle as an opportunity to light a candle in the broken tower, but without Brienne there, no one’s coming. When a bow-wielding Myranda threatens Sansa, Reek can’t take it any more, and throws Myranda to her death. Fearing Ramsay’s return, the two take hands and do a Bonnie and Clyde off the castle wall, into the (presumably deep) snows below.

In Braavos, Arya steals a face from the House of Black and White and uses it to kill Meryn Trent. It’s one of the more gruesome deaths the show has ever done—Arya blinds him with a dagger, stabs him repeatedly, and then taunts him before cutting his throat. “Do you know who I am?” she asks. “I’m Arya Stark. And do you know who you are? You’re no one. You’re nothing.” Proving Jaqen H’ghar right, Arya’s not ready. Back at the House of Black and White—in a truly baffling scene—H’ghar pays back the Many-Faced God for Trent’s life, and Arya is rendered blind as punishment.

While the scenes in Braavos have been mostly confusing, the scenes in Dorne have been mostly worthless—Jaime and Bronn are ready to sail back to King’s Landing with Myrcella and Tyrstane, and Ellaria apologies to Myrcella with an awkwardly long kiss—“Forgive me, child. I wish you all the happiness in the world.” On the ship, Jaime confesses that he is, in fact, Myrcella’s father, and she tells him she already knew, that she’s glad. She hugs him before, of course, collapsing dead from poison. We knew Ellaria wouldn’t let this go, though recent comments from actress Jessica Henwick that the Sand Snakes were involved in a “very extreme” part in the finale—that it’s a “big move” and “sets the rest of the show on a very certain path”—come off now as a bit sensational; unless this provokes a war with Dorne, or maybe Ellaria finds a way to kill Prince Doran. Either way, Myrcella was hardly a character at all.

If nothing else this will likely be the end of Jaime and Cersei’s love affair—the death of Myrcella, Jaime failing her again, after all she’s suffered this season from the Sparrows. Cersei does manage to get herself out of the dungeons, confessing to the High Sparrow that she had sex with her cousin Lancel, but denying all else. She must walk, naked, in shame, back to the Red Keep, as the commoners yell “whore” and “bitch” and spit and throw rotten food at her. It’s a long, degrading walk—and a long, tiring scene. It should do something to endear Cersei to us, but as the show’s most hatred character for five seasons now, it doesn’t, so we’re left to revel in her abuse, to smirk at her comeuppance, which isn’t something we should be comfortable with, enjoying this suffering.

Meanwhile, Daenarys is stranded on some remote hillside far from Meereen, as Drogon is too tired to fly her back from wherever he’s taken her. She wanders off, looking for food, and is quickly surrounded by a Dothraki horde. Whether they’ll know (or care) that she was once married to Khal Drogo… well, who knows? Maybe she’ll have a new army to help out with what’s left of the Unsullied and the Second Sons. She drops a ring on the ground, presumably as a clue for Jorah and Daario to find. Tyrion, Missandei and Grey Worm will rule Meereen while Daenarys is gone—“the Queen’s closest confidante, the commander of the Unsullied, and a foreign dwarf with a scarred face,” Daario says. “Good fortune, my friends. Meereen is ancient and glorious… Try not to ruin her.” When Varys arrives he offers a somewhat different take: “A grand old city, choking on violence, corruption, and deceit. Who could possibly have any experience managing such a massive, ungainly beast?” Thanks to Tyrion and Varys, Meereen might actually be the most exciting storyline of season six.