Is Kristen Wiig and Will Ferrell's upcoming feature inappropriate? 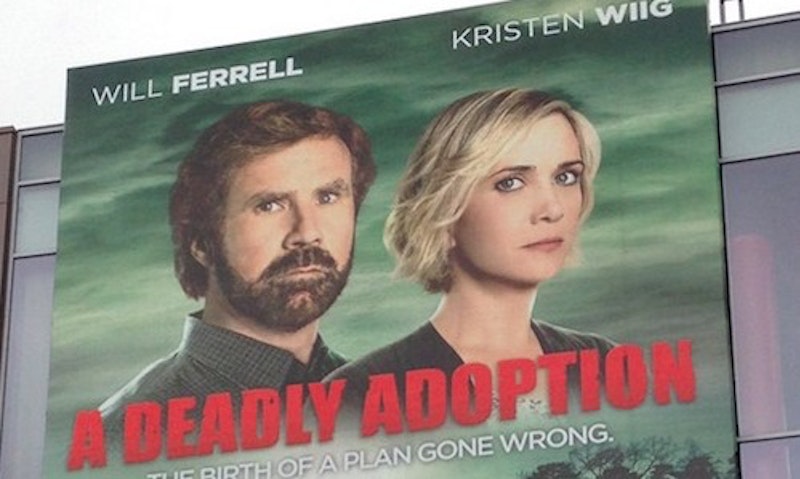 After months of hints and rumors, Kristen Wiig and Will Ferrell's Lifetime movie, A Deadly Adoption, will premiere on June 20. The story’s about a couple who care for a young pregnant woman in hopes of raising her baby as their own. Jessica Lowndes co-stars as their potential victim, though little else is known about the much-anticipated film. By all accounts, A Deadly Adoption will be a parody of typical original fare made for the Lifetime channel. In fact, this year marks the 25th anniversary of the channel's movie brand. This news was met with both excitement and snickers.

For years, Lifetime originals have occupied a curious space in pop culture. The typical feature involves major female characters confronting opposition that threatens their sense of safety and sometimes their lives. Fears about intimacy, pregnancy and child-rearing, and social reputations are often front-and-center. While Lifetime has long been "in on the joke," these films are typically presented as serious thrillers and dramas, sometimes with popular and well-respected television and movie stars in leading or supporting roles.

Will Ferrell and Kristen Wiig are also "popular and well-respected television and movie stars" in their own way, though the announcement of their involvement in a Lifetime movie production implies a certain ironic distance from the material. The former Saturday Night Live veterans are almost exclusively comedic performers, and the recently spotted billboard advertising the new cable movie appears to be playing it straight, which paradoxically just reinforces the satiric nature of the project.

But what exactly is being satirized? Lifetime movies are noted for melodramatic content, occupying a place in between soap operas and movies-of-the-week. These productions are "aimed" at women, though the more lurid and absurd ones often cross over to other demographics as one of the few modern examples of not-entirely-intentional camp value.

Previously, "women's pictures" and "chick flicks" have covered similar ground, though rarely with the same sadistic focus on capitalizing on the most common and enduring fears of women. The anxieties capitalized on by these productions are very real, even if they're presented in an exaggerated and sensationalized package. A satire of these conventions is certainly possible to undertake while remaining sensitive to the real issues faced by women. It's unfair to make any judgments about A Deadly Adoption before it’s aired, but the question of appropriateness is an important one. Few seem to take Lifetime movies at face value, but often they are based on true stories or at least inspired by events that aren't entirely uncommon. Most pregnant women don't have to fear being targeted by a wealthy, childless couple, but many expectant mothers nevertheless face challenges to their own safety and that of their future child, and often there is little support available to them.

It's no mistake that these films are supported by advertisers of cosmetics, clothing lines, and weight loss centers. The more shocking affronts to personal safety depicted in the films set up the viewer for the more insidious manipulation that takes place during the commercial breaks. There's a real cynicism involved in the churning out of this sort of fare, and making a joke of these conventions is treading on shakier ground than many will acknowledge.