Game of Thrones Recap 5x9 - "The Dance of Dragons" 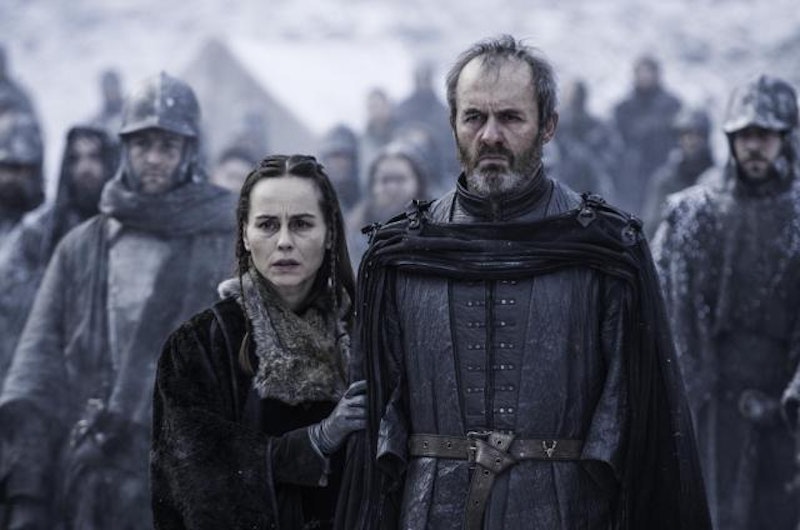 Fans and critics alike have complained that season five of GoT hasn't amounted to much, and if there's been any kind of theme it's something about fanaticism—the Sons of the Harpy uprising in Meereen, the Sparrows moral crusade at King's Landing, and Stannis' horrific decision to sacrifice his daughter Shireen to the Lord of Light. What will come of this (Roose Bolton "killed by a shadow," maybe?) isn't yet known, but we'll likely find out in Sunday's season finale. The scene itself is brutal for what it doesn't show; we hear only Shireen's desperate screams as the fire rages, though this wasn't exactly unexpected. There'd been far too many Shireen scenes lately, even in just this episode, and once Stannis had sent Ser Davos off to Castle Black we knew he'd decided on something—"At least let me take Shireen," Davos pleads. "A siege is no place for a little girl." "My family stays with me," Stannis tells him.

Down in Dorne, Jaime works out a deal with Prince Doran (and his son Tyrstane) that both brings Myrcella back to King's Landing (along with Tyrstane, who will take over Oberyn's seat on the Small Council) and saves Bronn from execution. Doran has Ellaria bend her knee, kiss his ring and swear her loyalty—"Your rebellion is over," Doran tells her. "…I believe in second chances. I don't believe in third chances." If it weren't for actress Jessica Henwick's revealing comments in a recent interview, all of this would come off as supremely disappointing; Rebellion? What rebellion? But as Henwick told Yahoo! News Singapore: "What happens with the Sand Snakes is… extreme. Very extreme. So I’m really curious to see how people take it. I don’t know what else I can say! Episode 10 sets the rest of the show on a very certain path. It’s a big move in Game of Thrones, and the Sand Snakes are a part of it."

Make of that what you will. Vanity Fair’s Joanna Robinson speculates on a number of possibilities, the most “extreme” of which include the death of Jaime, the death or disfigurement of Myrcella, or the alliance of Dorne with Daenerys (which happens in the books, though Benioff and Weiss have proven they’re not so concerned with that anymore).

Meanwhile in Braavos, Ser Meryn Trant finally arrives, escorting the ever-whimsical Mace Tyrell for his negotiations with the Iron Bank. Arya, at the docks to kill “the thin man,” sees Trant and follows him to a local whorehouse, where we learn that Trant likes his girls quite young. It’s hard to say whether Trant recognizes Arya (even faintly), or whether she’s merely piqued his depraved desires, but it seems she’s found a convenient way to kill him.

And in Meereen, Daenerys presides over the official reopening of the fighting pits, where Tyrion and Loraq debate the necessity of such a brutal tradition. “It’s easy to confuse what is with what ought to be,” Tyrion says. “Especially when what is has worked out in your favor.” Jorah soon appears, one of six fighters squaring off, and Daenerys watches with restrained concern as he narrowly avoids fatal blows. In the end, he’s victorious, and as he stares at Daenerys, he grabs the spear of a dead fighter and hurls it past her… into the chest of a would-be assassin. Sons of the Harpy are suddenly all around, and Jorah and Daario, as well as some Unsullied guards, fight them off as they try to get Daenerys to safety. They’re eventually surrounded, and just as it looks like the Sons will prevail, in swoops Drogon. Many of the Sons scatter, while others are set on fire and still others hurl spears at the dragon. Daenerys, fearing for Drogon, mounts him and orders him to fly away. Jorah and the others are left to fend for themselves, though presumably Drogon killed enough of the Sons for them to escape. It’s a bit of an odd scene; the necessity of Drogon and Daenerys escaping isn’t really obvious, since it’s a dragon vs. a bunch of merchants in gold-plated masks. Still, what happens next with Daenerys and Meereen (which is in all-out uprising) is unknown.