The Dictator is a smart film, but not nearly as smart as it should be. 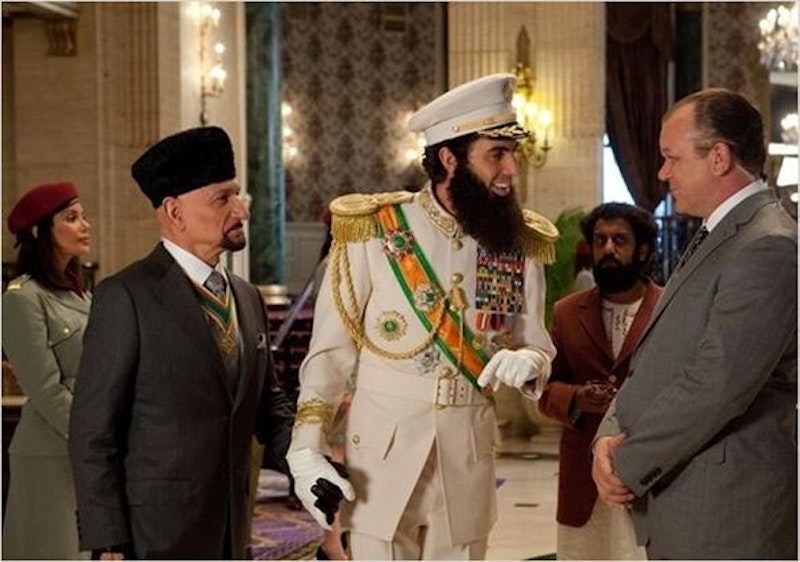 Sacha Baron Cohen’s third film with Larry Charles, The Dictator, is funnier than anything else out now despite a wack script and boring, junior high-level sense of humor. Besting their effort Bruno by miles, The Dictator has swatches of brilliance sewn in amongst a swamp of stale jokes and tired situations and tropes—a scene where Baron Cohen’s Qaddafi-double Aladeen learns how to jerk off for the first time, or when a clueless cave dweller tries to milk a Brazilian prostitute and her friends instead of fuck her—added in with some good ‘ol chlorinated pop culture references to get you nice and numb, like referring to Mahmoud Ahmadinejad as “a snitch on Miami Vice.” Charles and Baron Cohen can’t seem to move past ameliorating the meathead segment of their base; the type of bro who thinks he’s paying for some kooky accents and a good a-rab ribbing—the same bros who grunt with excitement when the aforementioned prostitutes start making out—even though his whole body of work centers around deceiving privileged and comfortable people to reveal their irrational fears and intolerance of foreigners and perhaps strange people. It’s disheartening that they usually lean towards Adam Sandler and not Charlie Chaplin.

My crankiness aside, The Dictator is still smarter and more incisive than any navel-gazing romcom or stoner boogie currently clogging theaters. They couldn’t have asked for better timing, and despite the silliness it’s more in touch with reality than most movies. There’s an on-the-nose and completely true speech to the UN at the end that if the U.S. were to renounce democracy, we could carry on with robber barons in power, oligarchy, segregation, for-profit prisons, torture, secret police, and corporate submission however we wanted, without any impediment. Yet the moment feels rushed and crammed into a movie too unsophisticated to make anything of it—but for what it is, you won’t be let down. There’s enough healthy disrespect for authority and idolatry here, and dozens upon dozens of swipes at real people, to keep the barb intact.

Lots of insinuating that certain celebrities might be gay or at least prostituted themselves to Bobby Lee’s hilarious Chinese diplomat, but not nearly enough points to drive the message home without any sense of doubt: that even though Qaddafi, Mubarak, and Kim Jong-Il are scumbags to the highest degree, the backbone of our own country is supported by just as many heinous human rights atrocities like industrial food processing (the only reason chickens and pigs continue to be pumped full of steroids and live their whole, chronically and hellishly excruciating lives in cages overflowing with shit, is how easy it is for us to look away when it’s convenient), for-profit prisons and forced urban neglect that segregates cities and leaves half of us in sub-human conditions, Gordon Gekko crooks who took Michael Douglas’ words literally and destroyed our economy (in a benevolent dictatorship, they would be the ones executed first), and the corporate politics that keep us scared and full of pride.

Sacha Baron Cohen is great at deflating our false sense of pride and superiority and holding up a mirror to the ignorance, bigotry, submission, and innate fear that drives the clueless. As the clueless grow, it’d be amazing to see Baron Cohen go for broke and make a Chaplin-level work, but he’s just a little too silly. The Dictator remains, though, the best film out this month.