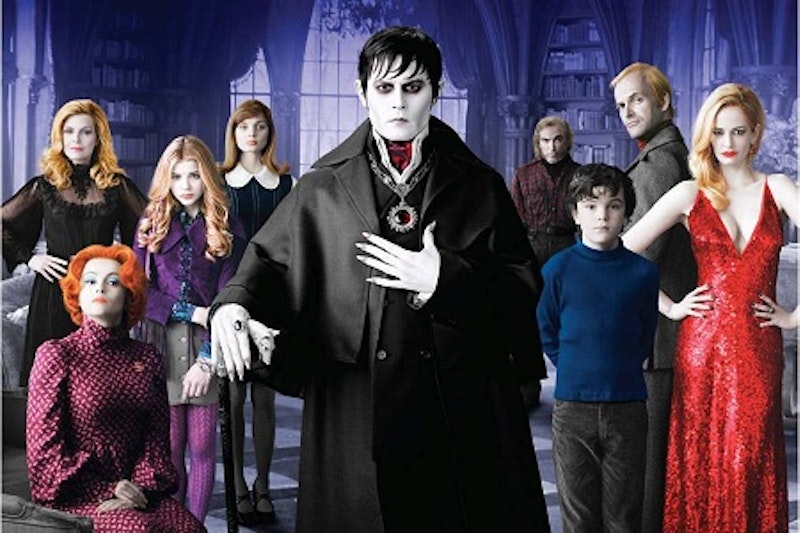 My wife and I took our eight-year-old son to see Dark Shadows this weekend, and discovered that PG-13 covers a lot of territory. The last Harry Potter films were PG-13, for example, and that meant kind of scary and some people die. Dark Shadows, though, is PG-13 and that apparently meant not-nearly-elliptical-enough references to oral sex. Which luckily my son is too young to get, but my wife and I got them and we were sitting there with our son and so were able to contemplate just how unfit we are to be parents. Which is not a new revelation or anything, but it's always painful to have it brought home to you like that. Luckily there were no DCFS agents present.

What there were in the theater instead were a lot of black people. In fact, I'm pretty sure we were the only whites there. In one sense, this is not particularly surprising—we saw the film on the south side of Chicago in an African-American neighborhood. I've been to the theater a number of times, and the audience is always heavily black.

Still, it was a little weird because, despite its name, Dark Shadows has a remarkably pale cast. And I'm not just referring to the make-up Johnny Depp dons as the vampire Barnabas. No, what I'm talking about is the fact that everyone in the cast was white. Unless I missed an extra hidden behind a gargoyle or obscured by the exploding canning factory, even the bit players here were impressive in their studious eschewal of diversity. No blacks. No Hispanics. Not even any Asians, as far as I could tell. Hollywood's fictional 1970s Collinsport, Maine is white, white, and also white. Unless you count some Curtis Mayfield on the soundtrack, I suppose. Which I don't.

Of course, you could argue that the actual Collinsport, Maine, in the 1970s would have been racially homogenous. And that's true—Maine even today is 94 percent white, and a small seaport town like Collinsport would be a few percentage points higher than 94 percent, I'm sure.

Still, the vampire/witch/werewolf population of Maine is significantly less than six percent, and yet somehow the film found room to represent this minority group.  Moreover, while pervasive segregation has meant that parts of the country have no African-Americans living in them, there is no section of the country that has been untouched by African-American culture. A good deal of Dark Shadows is devoted to the fish-out-of-its-coffin humor of the 18th-century-born-Barnabas struggling to deal with the brave new world of 1972. His reaction to changing gender roles (women doctors!) is mined for laughs, as is hippie culture and changing musical tastes (Alice Cooper makes an enjoyable guest appearance.) But the vast changes in style and consciousness caused by the Civil Rights movement are never addressed. Surely Barnabas trying to parse Black Power—or even the Electric Company—would have been worth a laugh or two. It's hard to imagine a 1970s without soul, even in Maine, but Dark Shadows pulls it off.

The African-American audience I watched with didn't seem especially disturbed by the lack of diversity. On the contrary, for the most part they seemed to enjoy the film, oral sex jokes and all. No doubt they long ago accepted that Caucasians were going to dominate their cineplexes. As my wife's been known to say when challenged about her love of 80s hair metal, "If I only liked pop culture that wasn't sexist, then there'd be no pop culture to like, would there?" Still, after a couple of hours of ghosts, vampires, and witches, the creepiest moment of the afternoon was leaving the theater and realizing that, as far as the film was concerned, the people around me were barely existed even as dark shadows.