Lexie Grey shuffles off to that big operating room in the sky. 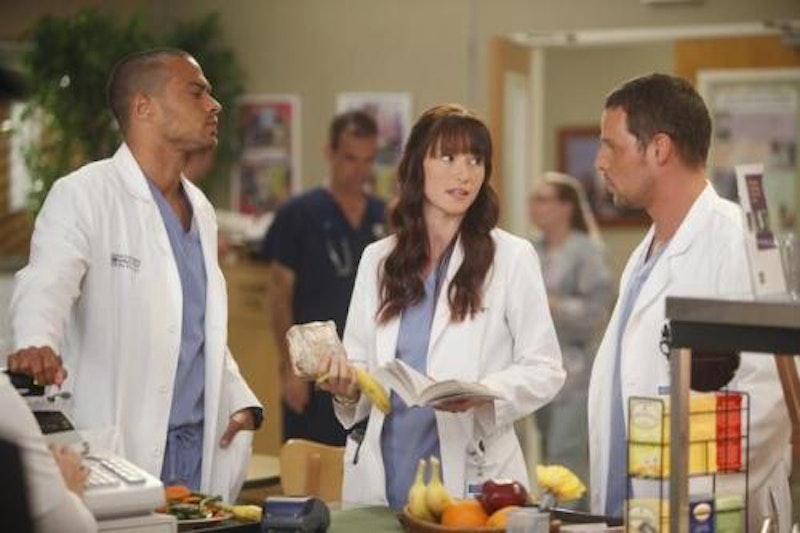 The season finale is a tried and true venue for killing off unwanted characters. This year, the Grey’s Anatomy braintrust opted to shake things up by throwing a bunch of doctors on a small plane shuttling between hospitals and making it crash in the middle of nowhere, pinning Lexie Grey (Chyler Leigh) under a hulking chunk of metal and allowing America to watch her expire painfully. As character assassinations go, hers was efficient and moving—and indicative, in an indirect way, of how long in the tooth this medical drama has become as it limps towards Season 9.

I’m not shedding any tears for “Little Grey”; she was a dithering, stuttering fool whose very existence was a franchise failsafe in case Ellen Pompeo bugged out to chase that C-movie Katherine Heigl popcorn money. She was almost in reserve, lurking on the edge of plots, the audience’s stand-in mascot, a doe-eyed cipher, a bobble-headed tool with a photographic memory that everybody in the resident class above her was more than happy to abuse. She was one of a handful of Grey’s characters so insufferable that I just couldn’t bear to watch her even when she didn’t have any lines or reaction shots. She had no peers, no function, no ultimate purpose; she was ballast.

But there’s more to this plane crash than that; Grey’s itself is feeling increasingly ballast-heavy. In a season that’s effectively about residents becoming real doctors and scattering to the four winds like dandelion seeds, this plane crash is a manipulative plot device, a crass way to keep the gang together under the Seattle Grace aegis. And while that’s the goal of every halfway successful series with an ensemble cast, pushing it here seems desperate. Early on, the Grey’s residents felt like a gang, and the intense camaraderie between Heigl, Pompeo, Sandra Oh, T.R. Knight, and Justin Chambers was equally endearing and bruising, like most viewers’ embellished memories of higher education. Post-Knight and post-Heigl, that sometimes-combustible chemistry is lacking; the spark is lost, everything’s running on fumes.

In some ways, what’s happened to Grey’s is a lot like what happens in real life: friends drop out of sight, replaced by people you work with and see every day but don’t especially like, the thrill of the new and dangerous gives way to numbing routine, what you care most about shifts in a tectonic blink. We’re ourselves, only radically different, sans inner monologues, too frayed to panic or blink. When this happens to a television show, watching it can be like gazing into a mirror—which, after a while, presents problems.