What does anyone have to gain from being in a Jerry Springer Show audience? 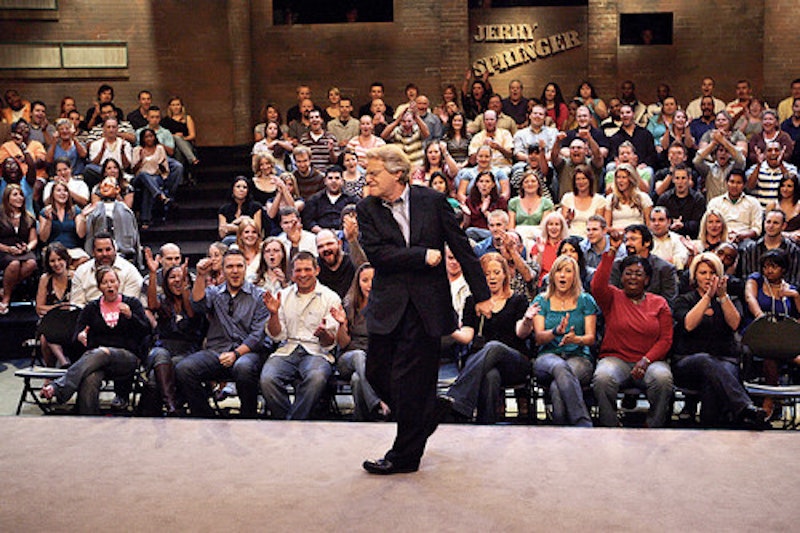 It was recently reported, ad nauseum, that Mitt Romney once bullied a gay high school classmate. Whether or not this is a fact is disputable; paperwork exists, sure, but it’s not like we’ve got videotape available of 18-year-old Romney being a douchebag, on hand to be looped endlessly on CNN. Without absolving Mittens of anything, what I’m getting at is this: everybody does stupid shit while growing up, and those of us who don’t wind up dead, in court, in jail, or in a wheelchair as a result should count ourselves fortunate.

My recent patronage of The Jerry Springer Show isn’t something I’m especially proud of; a family member has taken to DVRing the show and watching it for laughs, and despite myself, I wind up along for the ride despite myself. The whole enterprise is as loathsome now as it ever was, with its writers and producers and participants diligently working from a playbook with roughly the length and depth of a kindergarten graduation program. But what I outright hate about the show isn’t what you might expect. It isn’t the trash-culture memes, the nightmare wardrobes, the cookie-cutter plots, the flying of fisticuffs, the flubbed, contradictory dialogue, or Springer himself willingly presiding over and profiting from the cultural equivalent of fast-food.

No, it’s that inevitable moment where Springer shouts out that students from one institution of higher learning or another—Rutgers, the University of Florida, Boston College and so on—are in the audience, and so then all those kids leap from their seats, pumping their fists and yelling. Just generally acting the fool, and calling attention to themselves, and then later posing asinine, desultory questions to actors barely pretending to be representative of a class of American they like to imagine themselves as way above.

Springer offers undergraduates an atmosphere where misogyny and ostracism isn’t just permitted; it’s celebrated. On Springer, it’s cool to shout down and marginalize total strangers; big burly guys abound who’ll make sure your target doesn’t knock your block off. Beyond the moral irresponsibility inherent in the show and what it represents, why would anybody want to be immortalized as a dickhead? What intrinsic value is there in the existence of footage of 20-year-old you gleefully lambasting a tearful transvestite? What happens if someday you want to ascend to public office or the corporate equivalent and that embarrassment shows up on YouTube? We’re not talking about a video you can erase from Facebook and from the Internet; Springer is forever.

The world is full of museums, and parks, and street theater, and delicious delicacies, and myriad ways to serve your community and improve life for all kinds of people; these are positive things, and it’s sad to realize that so many are happy to revel in widescreen negativity. But youth is folly.