Mainly because of one line. 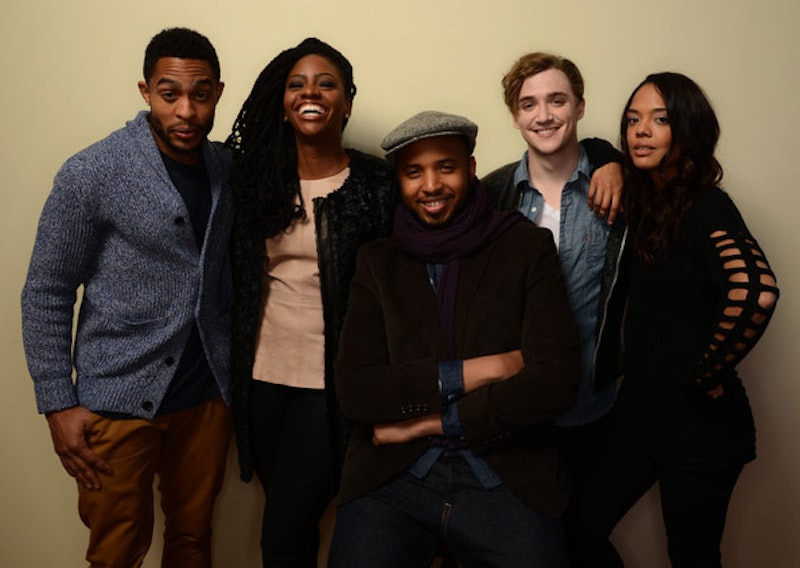 Dear White People is a scathing comedy about modern America's complacent racial illusions. I suppose. Here's a line: “Blacks can't be racist. Prejudiced, yes, but not racist. Racism describes a system of disadvantage based on race. Black people can’t be racist since we don’t stand to benefit from such a system.” Granted, the character speaking is a college kid, but still. Look in Merriam-Webster's Collegiate and racism is defined the way people expect: as “a belief that race is the primary determinant of human traits,” and as “racial prejudice or discrimination.” The academic meaning, that business about the system of disadvantage, doesn't get a look-in. But the college girl gives her mini-speech from behind her big eyes and scores a hit. That stolid Negro of a dean can only change the subject, rumble about the bad press the girl attracts for speaking out.

The fellow who did the movie is 31, but that line about racism is really sophomoric. To buy that bit of dialogue, you have to be dazzled by the thought of superior knowledge and what a thing it is to hold over the other guy. Not just comfortable and self-congratulatory, but transported. That's a young person's experience, a very young person's. Note that the college girl, by her own lights, is being called a bigot. She believes the dean is using “racist” to mean prejudiced, and he just called her radio show racist. A heavy blow, you would think. She'd have to answer, either to deny feeling hatred or justify feeling it, and either way she'd be talking about the center of her beliefs. But no, her social sciences quibble turns everything right side up. She and the guy making the film have a startling belief in the power of academic terminology.

The movie's opening scene presents us with a white president of a top college who pronounces, “Racism is over in America. The only people who are thinking about it are Mexicans, probably.” The bit about Mexicans is funny, but on the other hand the president is talking with his black second-in-command (the same fellow whose terminology displeases the college girl). I bet presidents at big schools are careful what they say about racism to their non-white colleagues. I also suspect that they don't believe racism is all done, and that the prevailing situation, whatever it is, calls for lengthy explanation by themselves, not a two-line dismissal. The Slate review where I read up on Dear White People says this bit represents the film “at its best” because the dialogue is “plucked perfectly from the comments section below any article or YouTube video about race.” Part of being a satirist is recognizing that YouTube commenters and college presidents have different ways of being stupid, or at least of expressing their stupidity.

There's a little more. I saw Justin Simien, the movie's writer-director, on Colbert and he used the term “micro-aggression.” Worse, he defined it as a “faux pas,” meaning a social goof that causes embarrassment. So goofing up, saying the wrong thing by accident, counts as aggression. Simien may be careful with words, but not in the sense of using them properly. He seems more interested in keeping them away from their meanings. If he let them off the leash, they would do all sorts of things he's not ready for.