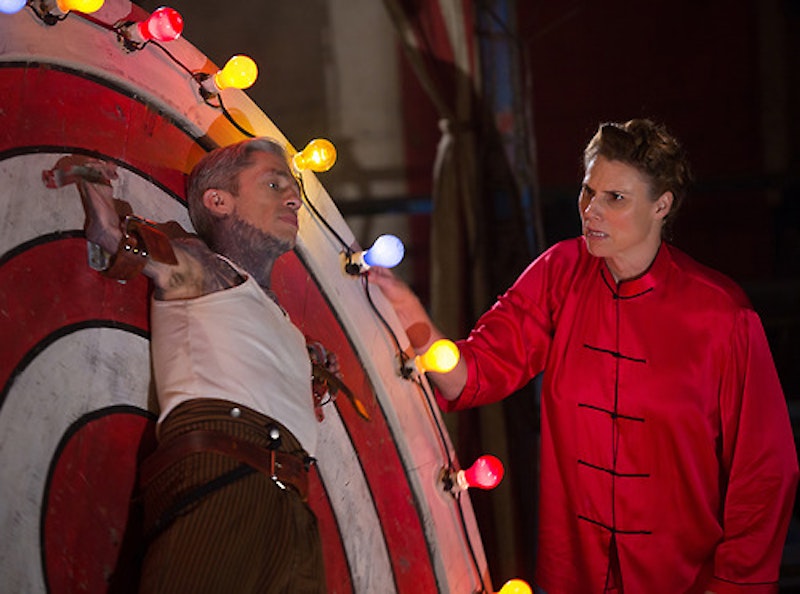 • Halfway through a season of a Ryan Murphy show everything gets very hazy, like the writers all got drunk while writing this script.

• The episode opens with Elsa's monologue showcasing what a fame-hungry sociopath she is, daydreaming of strapping her co-stars to a giant spinning wheel while she throws knives at them. She tells the bearded lady (Kathy Bates) that the twins she gave away in the last episode simply snuck away and she’s really great at acting pissed about it.

• Also, it’s allegedly Elsa Mars’ birthday week, showing the audience that although Elsa may have saved them all from their previous lives, they have a serious case of Stockholm syndrome.

• Never thought I’d say this but I really miss Twisty. Dandy claims he’s in love with Bette and Dot, doting on them and having his feelings reciprocated by Bette. He tells his mother that he plans on marrying Bette and Dot, which may be creepier than any murder scene this season.

• Plot twist: Elsa Mars and the Human Seal like to get high together and have sex. She doesn’t really see him as her equal, though, now that she’s off to have her own TV show. She reassures him that one day he can be her chauffeur once she has a “normal suitor.” However, was Ma Petite in the corner just watching this sex romp go down?

• Meryl Streep’s daughter (Grace Gummer) is back as the candy stripper girl from episodes 1 and 2 and she’s in love with the Seal Man.

• Dot begins to scheme that she’ll pretend to care about Dandy in order to raise enough money to have her and Bette separated. That's harsh, girl. Dandy pays her $10 to laugh at all his silly jokes and Dot gladly goes along. That is, until he lies about murdering Twisty and claiming Jimmy is a liar. When she refuses to share a secret with Dandy, he goes on a Godzilla rampage telling them it isn’t having fun anymore.

• The Seal man tells Jimmy he suspects Elsa has something to do with the disappearance of the twins. Elsa discovers that her lover’s sleeping with another woman, so she rampages again and insists that the freaks prove their loyalty to her by strapping themselves to her wheel so that she can toss knives at them. The Human Seal steps up and Elsa nails him right in the gut, claiming it was an accident, but her smirk and remark, “I wouldn’t shed a tear if you died,” prove otherwise.

• Esmeralda (Emma Roberts) is hounded by her boss Denis O’Hare, who wants her to bring him a freak’s body. There’s a disturbing scene where you think she’s going to put Ma Petite in a little jar and drown her to death, only to discover it was just a daydream sequence. When Denis O’Hare wants her to lure Jimmy to a shed so he can kill him and take his claw hands to a museum she kisses Jimmy and insists they run away together because they’re in love. Hey, writers of American Horror Story, there’s something called a slow burn in television romances and I wanted it here. You jumped the gun.

• Dandy is despondent after he snoops through Dot’s diary and discovers what she truly thinks of him. He cries to his mother that he was never meant to feel any love, and that he needs to accept this hollowness inside of him (which is a running theme through seasons 3 and 4 of American Horror Story). He resigns himself to his new mission: to bring death. Jimmy shows up at his door on a tip from the Seal Man to find the twins, leaving us off on a cliff-hanger.

• Admittedly, Dandy is probably the best character this season and although Bette may think Dandy is boring, the audience sure doesn’t.