The real story here is blackmail. 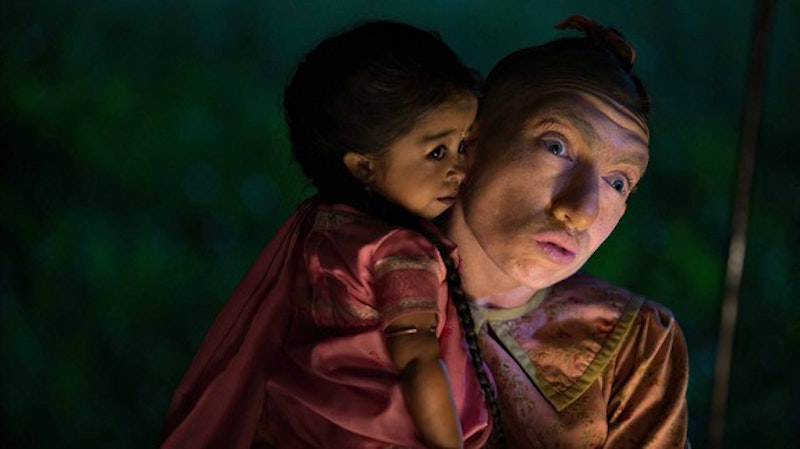 • The episode opens where the last one left off, with Jimmy realizing that Bette and Dot are being held by Dandy. When Dandy offers them the chance to leave, while proclaiming his love for Bette, they agree it’s time to go. Jimmy insists, realizing that the clown who attempted to cut Esmeralda in half was Dandy. Dandy is enraged when the twins and Jimmy decide to leave. He’s a ticking time bomb and it’s only a matter of time before he goes after the twins in an extremely violent way.

• Next thing we know, there’s Jimmy singing, making the Glee/American Horror Story cross-over series we all knew was coming a terrible reality. We have Del (The Strongman) looking for his dead lover in a gay bar. There are butts, people’s faces getting smashed into broken glass by Del, and confusion as to why I’m still watching this show.

• Jimmy confronts Elsa about selling off the twins only to have them cover for her. Everyone in this freakshow has Stockholm syndrome and for a season where the persecuted were supposed to come together against outside forces it seems like the show is self-destructing from within.

• Richard (Denis O’Hare) attempts to blackmail Del into helping him kill a freak in exchange for keeping the secret about his homosexuality. Del obliges and attempts to kill Amazon Eve, only to have her think he’s trying to get frisky with her and kick his ass.

• Esmeralda and Jimmy are totally together now and instead of just telling him the truth she’s still attempting to convince him to run off with her into the unknown.

• Bette and Dot demand that Elsa give them caviar for breakfast and 20 percent of the box office earnings for the show. Also, Bette claims she wants to become a comedian like Eve Arden. The title of this episode should have been “Blackmail.”

• Jimmy and Del ride into town to handle their issues like “men” (read as: get wasted in a dingy bar). At first, the scene plays out as the clichéd father/son moment you expect from scenarios like this, but you had to wonder if Del was getting Jimmy wasted so he’s easier to murder. Eventually Del and Jimmy cry and hug it out in the back alley after Jimmy confronts Del about genetically giving him his lobster hands.

• Penny (Meryl Streep’s daughter) returns home to pack up her things before she leaves her father permanently for her lover, The Human Seal. But her father won’t allow her to ruin his reputation, so he has a tattoo-artist friend transform her face and fork her tongue so that she resembles a lizard. This was by far the scariest scene this season.

• Elsa and Richard come to an agreement that the only way to get the twins out of the way is a “mercy killing,” and Elsa is excited to have found an agent willing to kill for their client. Everyone is after these twins, which probably means they’ll outlive everyone in the series.

• Just when Del was beginning to be slightly likeable, he sneaks into Ma Petite’s tent, gives her a gorgeous dress to try on, then crushes her while she hugs him. The episode closes with her body floating in a jar on display in a museum—maybe the best character of the season is gone.