Whiplash is a really creepy movie. 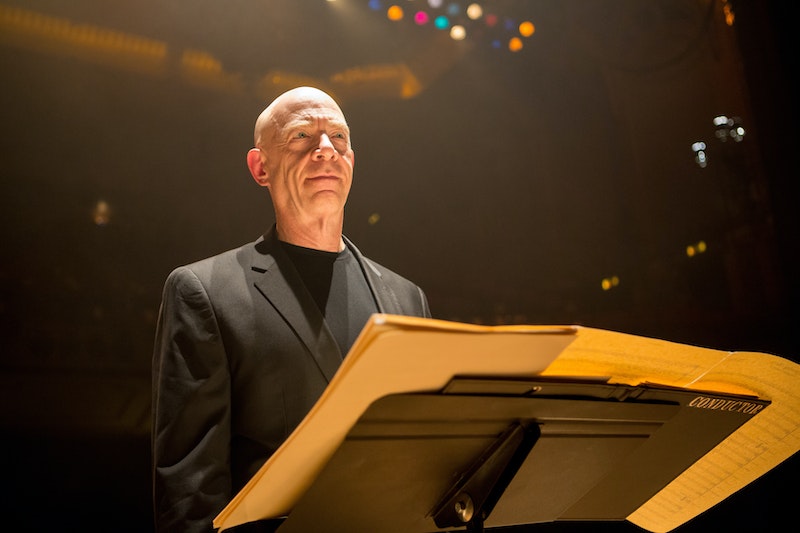 Damien Chazelle’s Whiplash is a queasy, creepy movie that up to its final moments feels off the rails and very dark, with the sort of tunnel vision perspective of a sociopath. The premise is pretty specific: a 19-year-old drum student Andrew Neyman (Miles Teller) at a stand-in for Julliard is abusively apprenticed by Terence Fletcher, a sadistic teacher/band leader that, as Edward Norton said in the classic Death to Smoochy, “might have some serious hang-ups with sexual identity.” His behavior is more like a football coach, hurling fags and dicks and suck my cocks as often as you’d expect in a locker-room, but I’ve never been to Julliard. J.K. Simmons (newspaper editor in Spider-Man movies) plays this weirdo—who constantly looks like he’s about to go to one of Bob Mould’s dance parties—trying to find someone new to share blood with and live vicariously through their success, since all he’s managed to gain is a shit job and a short temper. Why he flashes on Neyman is a mystery to me. Teller’s character is unlikeable and at times repellent, viscerally unsympathetic to the point that I was rooting for him to die when he got t-boned by a tractor-trailer.

Of course, he manages to crawl out of the wreckage conveniently to make a late appearance to one of Fletcher’s fucked-up mind games, where he gives Neyman core member status in his band, then takes it away, cycles between three guys just to torture him, makes his hands bleed from overplaying and switches around sheet music right before a performance. It’s completely bizarre and sadistic behavior that Neyman just loves and he takes and takes and takes it like the fucking dog he is. This movie has a vague but totally enveloping misanthropy and social dysfunction. No women are featured except a girl that Neyman asks out. She’s in exactly four scenes: they meet, he asks her out (in a painfully tense way), he breaks up with her as if he were firing an employee, because he has to give his life to music. And then, after he’s been re-fucked and double-fucked in front of important jazz professional crowds by his Dahmer-lite instructor, he calls her with an invitation to an upcoming concert. She says she’ll ask her boyfriend if she can go, but, y’know, she doesn’t know.

Fletcher is an abusive and dangerous person, with obsessions and vanities that arguably contributed to the suicide of one of his former protégés. But I was surprised at how much more I disliked Neyman. This is my own reaction, but he’s a really gross person with absolutely no empathy and a lack of love and tact. His “practice makes perfect” as self-validation is sad and disturbing. He comes off like a school-shooter in waiting, especially in his (few) interactions with the girlfriend, and his endless tolerance of this psychopath’s weird obsession with him. The ending leaves me hanging in a big way—it drives home exactly the wrong point, that practice does make perfect, at all costs. Fletcher is guilty but Neyman is even more despicable for buying into it.