The Ones We Love the Most 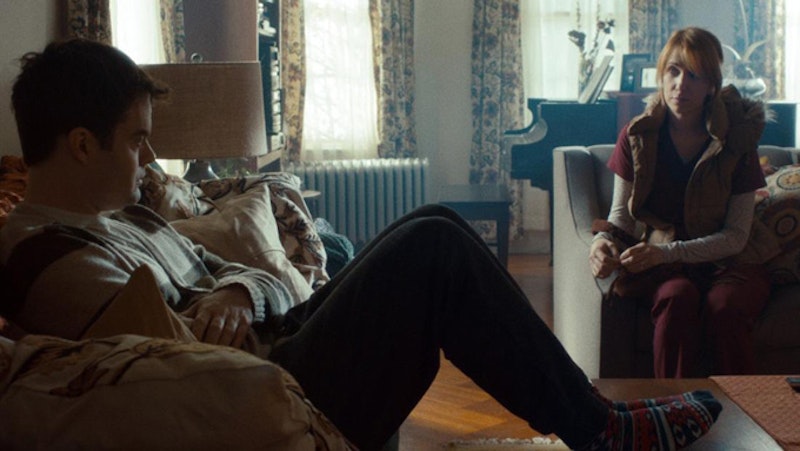 The trouble with watching comedians or comedic actors in dramatic roles is that it’s too easy to bring preconceptions into the theater with you—you want, desperately, to have license to laugh at these riotously hilarious, famous strangers in situations that aren’t necessarily even funny, that are sometimes fraught. This was a particular problem for me with The Skeleton Twins, where Bill Hader plays a despondent, gay, failed actor named Milo, and Kristin Wiig plays his sister Maggie, a despondent, dental hygienist.

At the outset, these twins haven’t spoken in a decade, but Milo’s failed suicide in Los Angeles reconnects them. Maggie brings Milo home to NYC to recuperate, with the implication that she’s the more stable of the siblings. Which is bullshit: she’s a nymphomaniac who’s popping anti-pregnancy pills and banging strangers while her happy-go-lucky husband Lance (Luke Wilson) labors under the delusion that they’re trying for a baby. Worse: Milo rekindles an ill-advised relationship from his adolescence that is key to his estrangement from Maggie. Worst: Dad killed himself when Milo and Maggie were teens, and Mom’s a New Age flake.

As might be expected, self-recrimination, blank 100-yard stares, moaning in parked cars, and bleak, blackened humor abound here. Wilson, playing Lance as a stolid, can-do lunk so affable and optimistic that he’d be insufferable in real life, seems to have wandered in from a totally different movie; initially and unwittingly the butt of the joke, he ultimately becomes the sole sympathetic character, good-naturedly employing Milo in brush-clearing work his brother-in-law is categorically unfit to perform and oblivious to the reality of Maggie’s emotional distances.

Meanwhile, Hader’s all drawstring hoodies, slack expressions, and self-depreciating gay jokes, laying Milo’s desperation bare against director Craig Johnson’s backdrops of merry East Coast foliage; this ain’t Stefon by any stretch of the imagination. For her part, Wiig’s Maggie displays a tortured helplessness, a slave to impulses she can’t control, the tightly wound tension she employed so expertly on Saturday Night Live funneled into psychic agony; in the beginning, when Maggie receives the call about Milo’s failed suicide, she’s interrupted while enacting her own suicide. They’re damaged goods, certainly, yet the charge of Skeleton Twins arrives not when they’re behaving badly but when they collapse reflectively into “distractor” sibling roles—teasing laughs and memories from one another.

(Worth remembering, though: those we love most are, arguably, the most capable of delivering the gravest injuries on a dime, without recognizing the damage done until it’s too late.)

There’s a key scene where this dynamic crystallizes in collusion with a moment where mirth isn’t just implied, it’s almost demanded. Maggie is bummed out; Milo senses this, hastens to a hi-fi, and cues up “I Had the Time of My Life,” Bill Medley & Jennifer Warnes’ pungent slice of cheesecake from Dirty Dancing. Milo—Hader’s face becoming again, delectably, rubbery and tremulous—lip syncs the first few verses, gesturing campily, encouraging Maggie to join him. Maggie’s not having it, at first; she’s pouting, eyes burning. But before long she’s up off the couch, lip syncing madly, dancing with Milo, and committing fully to the ridiculousness of what’s clearly a bygone ritual, an old game. It’s funny, sure, but it’s also earned—it doesn’t feel like it’s a sop from Johnson to the audience for his marquee stars. You won’t necessarily like the people they’re pretending to be, but you’ll buy their commitment to pretending to be those people.