The Day I Was Fired by Chevy Chase 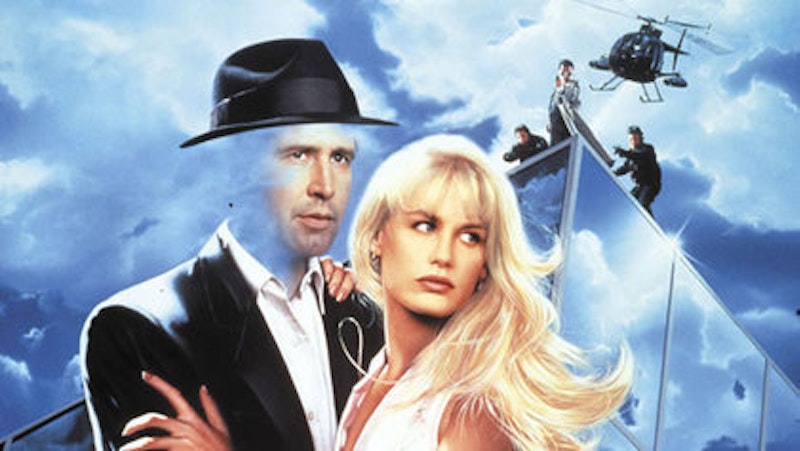 In 1991, I worked on the movie Memoirs of an Invisible Man. I was a lowly production assistant building my hours toward a desired career as an Assistant Director. The film was a high-concept caper starring Chevy Chase and Daryl Hannah, directed by John Carpenter. It was based on a popular novel about a stockbroker who becomes invisible after a freak accident. The project was a big-budget endeavor for Chase, who was trying to make the shift from comedy to more serious roles.

Much of the film was shot in San Francisco. My job was to implement crowd control as dictated by the First Assistant Director. One week into production we had a chaotic day of shooting at Huntington Park across the street from the Mark Hopkins Hotel. The location was a hub of tourist traffic including one of the busiest cable car routes in the city. This meant hordes of tourists or “roaches” as the First AD liked to call them.

The primary scene that day involved Chase crossing a busy street and walking through a small park. He would be wearing a blue jumpsuit that allowed the effects house Industrial Light & Magic to implement the invisibility illusion required by the story. (These were the days of “blue screen” instead of “green screen,” hence the blue jumpsuit.)

In the early 90s, Chevy Chase was still one of the biggest movie stars in the world and tourists clamored for his autograph. The First AD was concerned about his safety. He called upon me to do the dirty work. “The roaches are going to try to get close and sweaty with Chevy. I need you squash them. If a bogey comes close, do what you have to do to get Chevy to set. I don’t want anyone bothering him. Understand?”

By 10 a.m., hundreds of tourists had surrounded the location craning their necks for a view. They all asked the same questions. “What movie is this?” “Gandhi II,” I told them. “Who’s in the film?” “John Belushi,” I answered. (He’d been dead for 10 years.)

I walked to Chase’s 80-foot long motor home that took up most of a nearby street. As I approached, I could hear him pounding on a synthesizer inside the trailer. He played music between setups to help him relax. The music was a sort of cool-jazz sound with repetitive drum loops and high-register keyboard notes that today would resemble a teenage girl’s ring tone. I knocked on the motor home door. “Mr. Chase, they’re ready for you on set.”

The music stopped and I heard heavy footsteps moving toward the door. Chase appeared in his bright blue jumpsuit. Immediately tourists started yelling his name. We crossed the street toward the park. A young woman approached with an autograph book. I stepped between her and Chase. A middle-aged tourist darted forward with a camera in hand. I pushed him away. We reached the edge of the park, stepped past the caution cones and walked toward the set. We passed the craft service table and the crew came into view. As we were about 10 feet from the main camera a man in a suit holding a legal pad and pen stepped from behind a tree and moved toward Chase.

Impulsively, I leaped at the man and embraced him in a bear hug. The man lost his footing and fell to the ground. I fell next to him. A hush came over the crew. Several crewmembers helped the man to his feet. No one helped me. I realized I’d tackled Bruce Bodner, the film’s producer and Chase’s business partner. I felt my skin become hot and itchy.  I wanted to run but there was nowhere to hide. Everyone stared at me in horror. Chase was the first to speak. “What’s your name, son?”

Bodner quickly intervened. “No, no, it’s okay. He didn’t mean it. He was just doing his job.” Slowly I got to my feet. My hands and legs were shaking. I wanted to apologize but was too mortified. I looked at Chase and asked, “Does this mean I’m rehired?”

“Give the kid a raise and let’s move on,” John Carpenter said. “We have a movie to make.”

The crew returned to action. Chase and Carpenter disappeared to discuss the scene. I stood in place, traumatized, afraid I might faint or cry. The First AD appeared. “You squashed the wrong roach.” I was told to stay off set for a while. The First AD positioned me outside Chase’s trailer to shoo away any strangers. After 45 minutes, Chase returned to the trailer. He walked past me without a word and stepped inside. He resumed his music, this time playing a low-register dirge like something you’d hear in a B-Grade horror film. The music went on for a while then stopped. Footsteps moved toward the trailer door. The doorknob turned and Chase appeared and he stepped to the sidewalk.

“You think you can unzip me so I can take a crap,” he asked. I pulled the jumpsuit zipper halfway down his back. He smiled and spoke again. “That thing that happened back there… making movies is crazy, huh?” I realized he was apologizing to me. “Don’t worry about it, Mr. Chase. You were just standing up for your friend.”

“Call me Chevy,” he said. “And keep doing what you’re doing.”

“If that’s what you want to do, sure.” He fidgeted, apology over, ready to put this behind him. “Anything else you want to ask me,” he said.

“I heard there’s a town called Chevy Chase, Maryland. Is it named after you or are you named after it?”

“I’ve never heard that one before,” he said. With that he returned to his motor home and his magical keyboard. We wouldn’t speak again. The production left San Francisco a week later. I was not retained. A few months later, I gave up my desire to become an Assistant Director. I realized “squashing roaches” just wasn’t the thing for me.