Murder on the Nile

The main draw for these all-star murder fests isn’t necessarily a clever solution but the locales and how the stars align on screen. 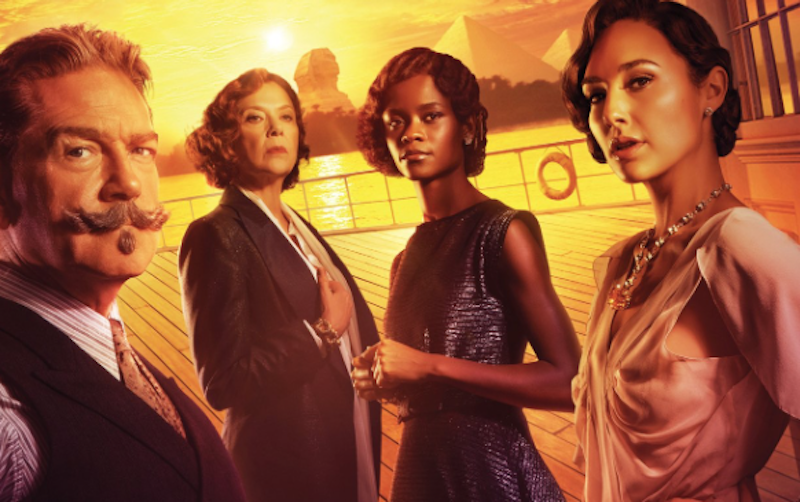 Whodunits at the movie theater in the modern era are like buses: You wait ages for one, and then three come along at once. Kind of. In this case, those “buses” are a whodunnit set on a train, followed by one set on a riverboat. Actor-turned-director Kenneth Branagh brought old-fashioned murder mysteries back into the theater with his 2017 remake of Agatha Christie’s Murder on the Orient Express, in which he also starred as Christie’s grand creation, the pompous but brilliant detective Hercule Poirot. Then in 2019 came director Rian Johnson’s acclaimed Knives Out, with a sequel promised in late 2022. Now, after a long pandemic delay, comes Branagh’s dark take on Death on the Nile, one of Christie’s personal favorites.

Filming on Nile wrapped up before the pandemic shuttered theaters. After several delays, the film was dumped into the dog days of February 2022, encumbered over the preceding two years with barnacles of controversy (try to find star Armie Hammer in the publicity shots). Add on a $100 million price tag and one begins to get a whiff of rotting fish off this Nile. But the reviews haven’t been deadly, and the picture may meet its modest box office expectations.

The main draw for these all-star murder fests isn’t necessarily a clever solution but the locales and how the stars align on screen. So much for the locale: Branagh filmed on a soundstage with water tanks in England, and the pyramids were generated by computer, not Cairo, as in the superior 1978 film version starring Peter Ustinov. Branagh plays around with Christie’s classic story of love and murder. Nile begins in black-and-white flashback to the trenches in Belgium during the Great War, with a young Poirot as a clever soldier. We learn the origin story of his mustache and meet Poirot’s lost love. Flash-forward to “present day” London 1937. The great detective walks into a blues club, a bit out of place, fascinated by both the singer onstage and the love triangle forming on the dance floor under his querulous gaze.

Why the finicky detective is there at all is another twist in the tale, and it’s not just to crush on singer Salome Otterbourne (Sophie Okonedo), who also joins the ill-fated riverboat tour, along with her niece, the sharp-tongued Rosalie, played by Letitia Wright of Black Panther and vaccine skepticism fame.With the flashback, Branagh, strangely enough, is faithful to Christie’s founding vision of Poirot. In Christie’s first novel, The Mysterious Affair at Styles, he’s introduced as a Belgian detective who fled to Britain following the German invasion of Belgium in 1914. The character was inspired by the novelist meeting Belgian war refugees and caring for wounded soldiers while serving as a volunteer nurse in Torquay.

In Egypt on honeymoon, Linnet and Simon (played by Armie Hammer, who thankfully only chews  the scenery here) can’t shake Jackie, who becomes an unwelcome 13th passenger on the Nile riverboat, the Karnak. Emma Mackey’s intense performance as Jackie is an emotional standout; she livens up the screen. Dawn French and Jennifer Saunders, famous in the United Kingdom as a comedy duo, provide what passes for comic relief here, while Russell Brand, a sharp comedian turned political podcast personality, disappointingly plays against type as a mopey doctor. Tom Bateman returns from Orient as Poirot’s friend and assistant Bouc, but here’s he’s more enmeshed in the plot, carrying a romantic crush for someone on board (there’s a lot of that aboard the Karnak).

As director, Branagh slims down Christie’s framework, with the traits of some discarded characters combined into a single entity and others shifted around. This time the people trapped on the murder boat make up a wedding party, leaving it less a coincidence that everyone just happens to have a reason to dislike Linnet (it’s not spoiler that she winds up dead).“He’s a bloodhouse, let him sniff,” one passenger says of the detective, as Poirot takes the case and tensions rise. After an aggrieved suspect objects to being accused of murder, Bouc cracks, “He accuses everyone of murder.” Poirot replies, “It is a problem, I admit.”A few twists in the third act bring things home personally to Poirot, no longer the detached intellectual, who feels the pressure to solve the case as the bodies pile up and the ship freezer doubles as a makeshift morgue.

Branagh and screenwriter Michael Green, who also wrote Branagh’s take on Murder on the Orient Express, are intent on retrofitting the quintessential character with a backstory beyond his well-worn character traits. A new wrinkle is his obsessive-compulsive disorder (before it became a diagnosis), applied here to the feet of corpses in a scene that delivers a dark giggle.Branagh, who’s in his early-60s, plays an active, light-stepping Poirot, even hurling a meat ax to try and pin down an escaping killer. Yet his Poirot is also a more tormented figure than his predecessors in the role: the laid-back Peter Ustinov; the pensive David Suchet; the intense Albert Finney. Think Poirot: This Time It’s Personal. The filmmakers’ commitment to the character’s rebuild is clear, the results less so.

By all accounts Branagh tried to make the shoot fun, but not enough made it on screen. And isn’t fun, with a frisson of danger, the reason why people watch these old-style whodunnits in the first place? It’s not gritty realism, which Branagh tries to inject into the Christie canon, with only sporadic effectiveness. A late murder, a thrilling highlight of the 1978 movie, is played for dark tragedy. And the climactic gathering of the suspects in the Karnak’s lounge is over too quickly.But Branagh’s gamble pays off in the intriguing epilogue, which sends the character in an unexpected direction and threatens to break the character out of his nearly-century-old mold, revealing a new Poirot in more than one sense.