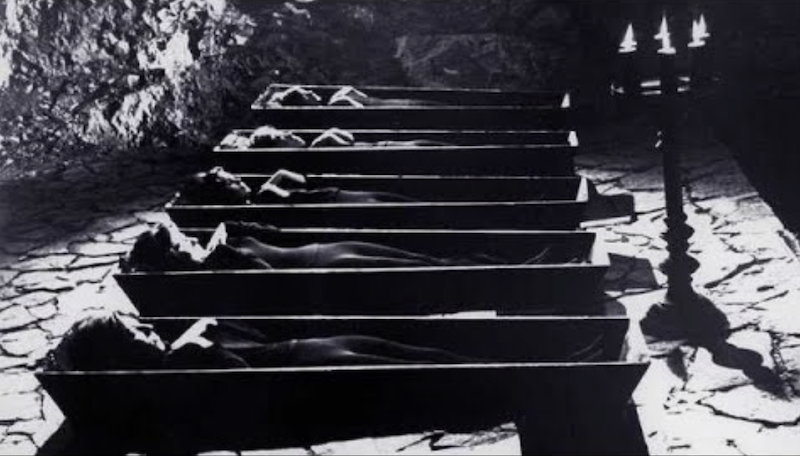 Two of the more eccentric works of early-60s horror were the American films Carnival Of Souls (1962) and Curtis Harrington’s Night Tide (an early Dennis Hopper vehicle from 1961). Both films established a new way of invoking supernatural terror through film noir techniques and subtlety. These quiet poetic visions stood in stark contrast to their grandiose contemporaries. The politically-charged German/Yugoslavian co-production Der Fluch Der Grünen Augen (“Curse Of The Green Eyes”) was one of the few European horrors to match the shadowy ambience of Carnival Of Souls and Night Tide. It was made in 1964, came out that year, and then re-released stateside in 1966. American audiences caught the film under the titles Night Of The Vampires and Cave Of The Living when it played in on a double bill with the Italian film Tomb Of Torture.

Der Fluch is about a murder spree in a small rural village. The electric power grid’s knocked out moments before each murder is committed. Cloaked in darkness, the killers make easy work of anyone unfortunate enough to be out after sundown. The suave urban police officer Inspector Doren (Adrian Hoven) is called on to crack the case. He’s a streamlined Sherlock Holmes/James Bond hybrid famed for solving unusually difficult mysteries. Elderly actress Vida Juvan plays a local witch who gives Doren a crash course in parapsychology and black magic. It’s her homespun expertise that eventually puts the detective hot on the trail of the culprits.

Much of Der Fluch is dedicated to slagging intolerance, superstition, and science. With each power outage/murder, supernatural power’s grip becomes stronger. Modern technology can’t control the ancient occult influences that save the townsfolk from danger. Doren serves as a voice of the modern using logic to temper the deep-rooted fears that connect the town to its old world beliefs. Complicating matters, these fears transform into the racism and intolerance lobbed at John (John Kitzmiller), the town’s only Black citizen, an employee of the sinister Professor Adelsberg. This scientist spends little time socializing; he secretly dabbles in occult forces connected to vampirism, the phenomenon which is proven to be a main cause of the murders. John’s one of the only Adelsberg employees who regularly visits the village center and becomes the object of hatred that stands in for the sketchy professor.

The anti-racism of this film is awkward. Nonetheless, this was a time when all anti-racist statements would’ve been challenging, especially in Germany where many ex-Nazis probably viewed the picture expecting nothing more than ghostly escapism. A few years later the young revolutionaries who comprised Germany’s Weather Underground and the country’s experimental psychedelic scene would create unhinged protests against the tragic conformity and pragmatism their parents embraced during World War II. Der Fluch is charged by the same eccentricity and creative energy that gave Germany’s youth movements historical impact.

The film’s dream-like imagery stems from a complex dynamic that no script or single character could ever illuminate. Der Fluch reveals that 20th-century society could never tame its legacies of horror. Director Akos Rathonyi makes sure that shadows permeate as symbols of overarching chaos. These create an occult perspective on post-war neuroses’ relationship to the mercurial nature of fate, a reminder that inevitably time must heal old wounds even while inflicting new ones at random.