Studio 666 is a bizarre horror-comedy curio starring the Foo Fighters. 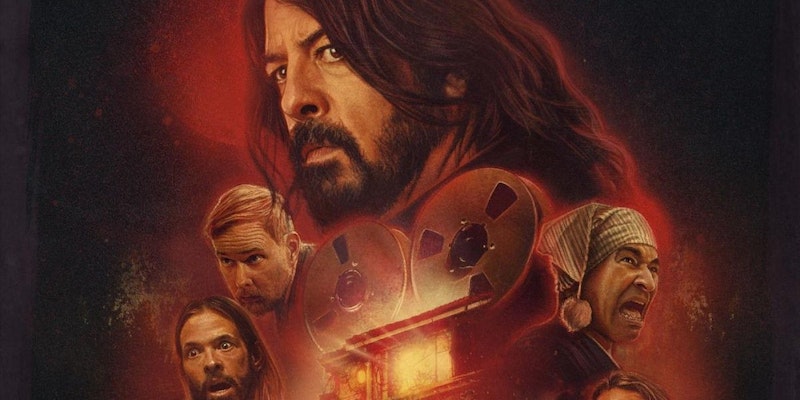 I'll give Studio 666 this: It's not what anyone was expecting from the Foo Fighters. The Dave Grohl-led band, which has been one of the most popular rock acts since they formed in the mid-1990s, have opted to make a bizarre horror-comedy starring themselves, even though none of them are really professional actors. It's a strange lark, but some of the gore is memorable, and there some laughs.

The film was directed by B. J. McDonnell, written by Jeff Buhler and Rebecca Hughes, and based on an idea from Grohl. The gimmick is simple: The Foo Fighters, struggling with writer's block, book a non-traditional recording venue, a big house in Encino. But the house turns out to be haunted by forces of the occult, and it's up to the band to finish their album, even if it kills them.

Picture Metallica: Some Kind of Monster, except not a documentary, and with violent Satanic monsters instead of a therapist. It's shorter than that film, but still much longer than it needs to be, at nearly two hours. The six members of the Foo Fighters—Grohl, Taylor Hawkins, Nate Mendel, Pat Smear, Chris Shiflett, and Rami Jaffee—aren’t natural actors, although that adds to the charm. They're fine when it comes to the horror stuff. One particularly memorable bit has two characters cut in half in a creative way.

There are a few ringers, led by Jeff Garlin as an evil music industry executive, who’s channeling that Steven Soderbergh movie (Full Frontal) where he played Harvey Weinstein. Whitney Cummings plays an ex-groupie neighbor and Will Forte a pizza guy, while Lionel Richie has an amusing cameo that couldn't have taken up more than 30 minutes of his time.

We don't get to hear more than snippets of the Foo Fighters' music, nor did they record any new songs for the film, although there's some material about the relationship between their music and the occult that seems left over from Tenacious D: The Pick of Destiny.

Studio 666, supposedly shot in secret last year, is fine, but it's not the best recent movie about the Foo Fighters. That would be a documentary called We Are The Thousand, which told the backstory of the Rockin' 1,000, a group of hundreds of musicians in Italy that gathers in a field and plays rock songs.

A video of them performing the Foo Fighters' “Everlong” went viral a few years back, and We Are the Thousand is a look not only at the group's history but their quest to meet Grohl and get him to the event. The documentary played at the South by Southwest festival almost a year ago and I've heard nothing about distribution, but I recommend seeking it out. Studio 666, in the meantime, gets points for being unique and not something we've seen before.