Jason As Told By Jason

Shirley Clarke's Portrait of Jason (1967), now streaming on the Criterion Channel, is an essential, pure documentary. 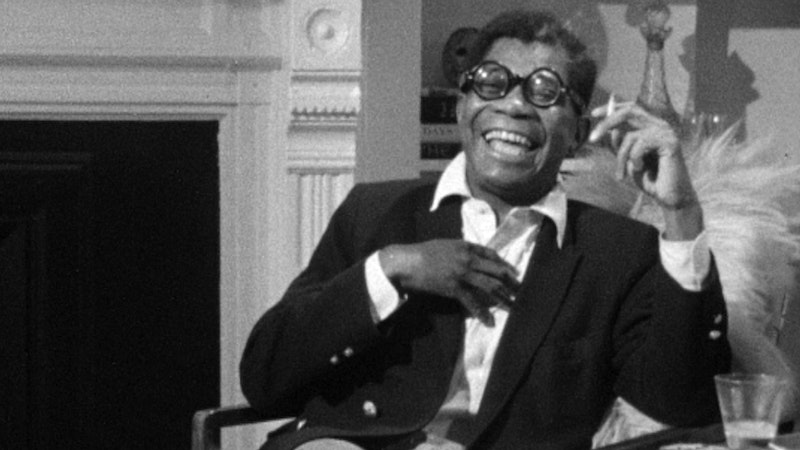 The film starts with an out-of-focus black-and-white four-by-three image. It grows sharper and we’re looking at a close-up of a bespectacled smoking black man; we hear another man off-camera calling out the director’s name, the movie title, roll one, sound one. “OK, Jason, go,” says a woman, and the bespectacled man begins to speak. He’ll keep talking most of the next 105 minutes, giving his story, the autobiography of Jason Holliday, gay hustler and burlesque performer.

The film is Portrait of Jason, directed by Shirley Clarke in 1967, and this man’s self-presentation is its core, a phenomenal not-quite monologue that must be seen as a strange mix of artifice and nature. Clarke and her partner Carl Lee, along with a small crew, interviewed Holliday in Clarke’s living room over the course of a single night, starting at nine p.m. on December 3, 1966 and ending about 12 hours later. Holliday drank and smoked through the night, and Clarke and Lee kept him talking, asking questions and as the night went on growing more confrontational.

Clarke edited the result into a coherent document of Holliday’s self-revelation and eventual breakdown. The Criterion Channel recently included the film in their “Close to Home” showcase, a set of films shot in their directors’ living spaces, and it’s one of the more intriguing uses of a director’s home: a stage for Holliday, a background against which he can tell his tales and perform for the camera.

Holliday goes through his whole life, in bits and pieces, through stories and reflections, leaping from one to another and holding nothing back. Or seeming not to. He talks about his name—born Aaron Payne, he consciously reinvented himself as Jason Holliday, and he talks about that choice, about all the choices of his life. He’s constantly laughing at himself or at nothing, quick and energetic, often getting up to wander before a fireplace, at other times collapsing to sit in a corner, always holding the attention of the viewer and the camera.

He talks about queerness and about Blackness in ways that must’ve been shocking 50 years ago. “I’m a stone whore,” he exclaims, and says he’s not ashamed of having a hustle. Later he claims, “If I’d been a ranch they’d have named me the ‘Bar None’.” He tells stories about drag queens named Kitty Cunt and Louise Beavers, talks about being analyzed by two different psychiatrists who go on about sex and want to know the size of his penis. Which he makes sure to casually mention is eight or nine inches long.

It’s an example of Holliday telling the camera what he wants his audience to know. “What I really want to do is what I’m doing now, is perform,” he says, and so touches directly on what is most powerful about the film: the question of what’s performance and what’s honesty and where the difference lies.

Clarke claimed to have both hated and been fascinated by Holliday, who she viewed as the perfect subject for a film, later saying: “I knew that when I chose him I was choosing somebody dramatic, photogenic, crazy, interesting.” She also knew what buttons to push to get the stories she wanted: “Jason is a performer, and everything except the last 20 minutes in the film I had seen a hundred times before. I’d heard every story that he told and every variation. I knew that if I asked him X, I would get Y.”

The end of the film shows Holliday breaking down, as off-screen voices accuse him of telling lies and hurting people. Holliday claims he’s a nervous wreck, suffering and desperate, and then denies it, and says he has no fun in the life he chose for himself. It’s a wild storm of emotion that must have something behind it, but what? How much is theater? How much is manipulation?

The power of the film is that it encourages the audience to think about these questions. It doesn’t merely put a human being on full display; it lets a human being display himself, meaning that you have to wonder about the honesty of what you’re seeing. Holliday commands the space he inhabits, not his own home but the home of the woman recording and prompting him. He makes the space about himself, fitting into the environment. To hear him talk, he’s done that all his life.

Portrait of Jason was a minor art-house success, but Holliday didn’t parlay his starring role into any further career. He made one stand-up comedy recording, and died in 1998 at age 75. The film stands as a memorial. It also stands as an odd kind of foreshadowing: you might be able to see modern YouTubers in Holliday’s performance, a man going on about himself direct to camera. Unlike most YouTubers, Jason Holliday didn’t have control of what was done with his image, didn’t have final cut of the film. But what YouTube shows us is how much that doesn’t matter: how much a good voice and pleasant affect and onscreen charisma shape our reaction to what we see, regardless of what’s being said. And regardless of how true it is.