The minor pleasures of The Counselor. 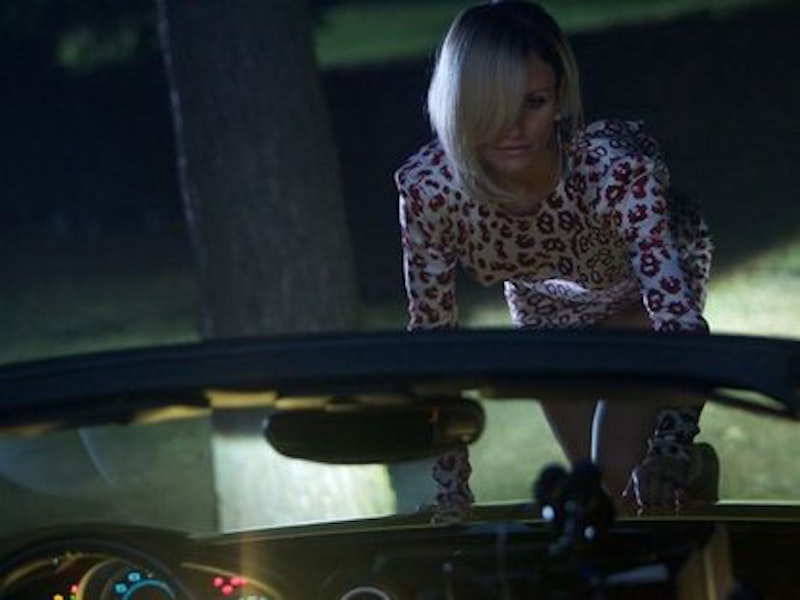 Rosie Perez as a wiseacre jailbird who's worried about her son on the outside. Javier Bardem, making like Robert Downey, Jr. after violation by Terry Gilliam's film adaptation of Fear and Loathing in Las Vegas. Ruben Blades as a cartel heavy pontificating, abstractly, in well-appointed finery. John Leguizamo's air-crackling cameo, where he plays a grease monkey who helps excavate barrels of cocaine from tanker trucks and gets to explain why one of the barrels contains an unnamed corpse. That same tanker truck, earlier in the narrative, shot up and bloodied, entering an enclosure somewhere in Mexico where children and adults casually patch and cleanse it; now that's what I call a full-service station, cabron.

The above are good reasons to seek out The Counselor, a far less prismatic approach to drug chic than Steven Soderbergh's Traffic. The movie also has no lack of long tracking shots to recommend it: cheetahs, motorcycles tearing madly through wastelands, a man methodically stringing steel wire across a highway for nefarious purposes. There is some pleasure in watching Cameron Diaz finally embrace, with unfettered gusto, the reptilian creepiness inherent in the weird contours of her face.

This is also a movie in which Diaz fucks a car—you read that right—so, there's that, too, plus Brad Pitt speaking again in 12 Monkeys riddles as a drug caper moneyman, wearing a cowboy hat, telegraphing the seeming invincibility of a man who has overstayed his welcome in a very dangerous business but is capable of vanishing without a trace at a moment's notice.

All of that stuff is great, even if the violence that erupts periodically is anti-climactic in its suddenness, even if novelist Cormac McCarthy's dialogue is stiffer and less emotive than a John Holmes porn scene. The Counselor is a puzzle that pieces itself together as you sink into its rendering of an unnamed lawyer—Michael Fassbender, whose performance evolves from rudderless early on to unearned masterful as the film inches forward towards an excruciatingly bloody denouement—who's had enough of representing dirtbags and wants in on the underworld action. You sense that he views putting down $12 million on a massive coke deal as a sort of benign investment, a way to cash out and wander into the sunset with a squeeze played by Penelope Cruz, with whom Fassbender exchanges some of the most untrue-to-life pillow talk banter ever to besmirch a movie screen. What could possibly go wrong?

To say more would give the game away, but know this: McCarthy's moralistic streak is in full effect here. By the time guns start banging and body parts start flying, everything said and done is revealed as a warning, a sign, or a portent. Trappings of vulgar wealth unspool eventually, the parable whispers, into wandering through cities you don't know, peering furtively over your shoulders while dumping your cell phones into trash can and bumming airtime from strangers. What's odd: as stilted as the screenplay sounds coming out of the mouths of its stars and as suffocatingly coiled as the filmography can feel despite the panoramic reach of the story, I wish The Counselor ran a bit longer. I wanted more time with Bruno Ganz's diamond dealer, with the rent-a-thugs who do most of the dirty deeds and receive thick manila envelopes for their trouble, with Leguizamo, with Richard Cabral's doomed motorcycle courier, at U.S./Mexico border traffic stops, with all those cheetahs whose presence registers as first as a running joke, then as something less benign.