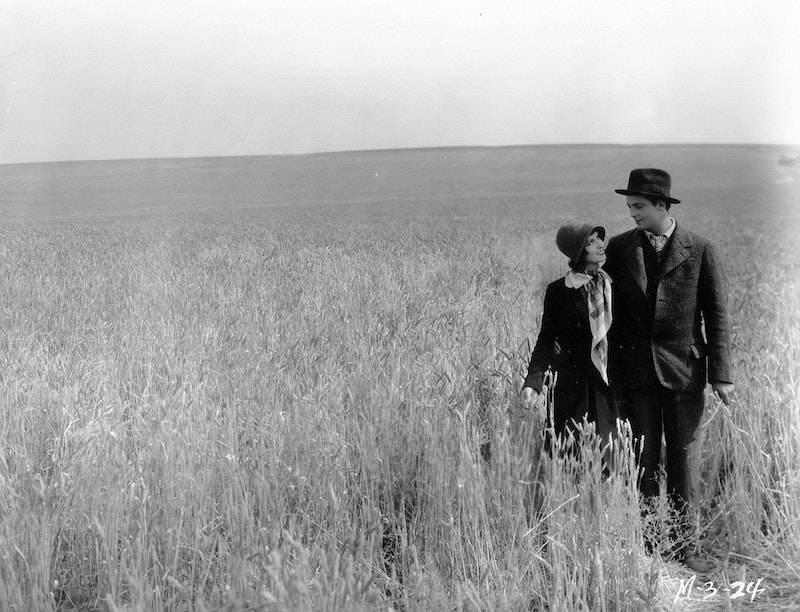 Love stories don’t often begin with marriage, but F. W. Murnau commits in City Girl—a silent film about long odds in the Great Depression. Lem (Charles Farrell) is a wholesome farm boy traveling from his Minnesota home to Chicago to sell his father’s wheat product. Kate (Mary Duncan) is a jaded waitress at a lunch counter near the trading center where the pair first meet. A chance to sell stock for the best price, there’s an even bigger chance that the love of your life is the one serving you corned beef and bread pudding. Lem was lucky that day.

He doesn’t hold out hope things will change, and sells at the first dip in the wheat price. Lem took just as much of a leap of faith at the trade center as he did with Kate. Both reluctantly go their separate ways after their brief encounter. It’d be crazy to ask a kind waitress to uproot her whole life and move to the country, and it'd be crazy to ask a man you just met to run away with you. But after an encouraging spin on the train station’s fortune telling machine, Lem’s pushed to take that chance. “If you marry the one you are thinking of, all will be well,” his fortune reads.

Kate wants to escape her life and craves the natural world. She’s caught gazing at tourist advertisements and landscapes on calendars. She has a dried plant on her window ledge that she blows the soot off of at the end of the day. Lem’s her ticket out of city life. Kate’s fantasy is realized when she and Lem first arrive at his family’s farm. A bright wheat field welcomes her and she jumps right in. Lem chases after Kate, laughing in pure romantic ecstasy.

This fantasy cracks when she meets Lem’s disapproving father, the crooked embodiment of the financial strain that the family farm’s under. Additionally, Kate’s subjected to the same objectification she faced at the lunch counter, only now by some of the farmhands. One man in particular targets Kate, finally fraying further at the fragile dynamic between of her, Lem and Lem’s father.

Kate flees from the city only to yearn for the old days. Released in the gray zone between silent and sound filmmaking, Murnau’s City Girl is a love story between the old and the new. Moonshots, chances of love, and the hope that things never change.