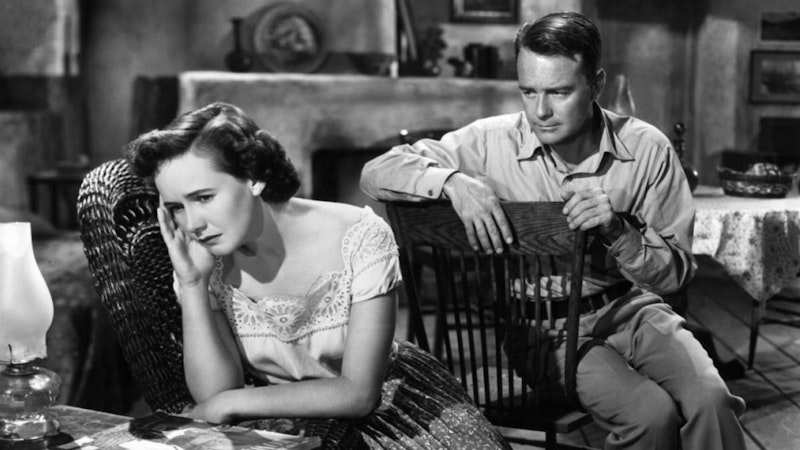 “Niven was very sophisticated. When we moved in together, he gave my dolls to the moving men. I don’t ever forgive him for that. Those dolls were my only family.” Teresa Wright was a shooting star, nominated for Oscars in her first three movies. But after William Wyler’s The Best Years of Our Lives in 1946, there are no more “classic” films in Wright’s filmography, nothing in the “canon.” Starring in Alfred Hitchcock’s best film (Shadow of a Doubt) and winning an Oscar at 22 for Mrs. Miniver would be enough to make most people crazy or satisfied, but Wright made mistake after mistake, professionally and personally, for the rest of her life. Though she remained a working actress on the stage, it wasn’t always Broadway, and she was touring well past 50. The best work this woman did will never be seen by anyone alive today, and there are so few films with her, all because Samuel Goldwyn got pissed she wanted a contract renegotiation and subsequently walked out.

Marrying Niven Busch in the early-1940s was her first big mistake: not only a lousy husband, Busch was also a screenwriter and aspiring producer. Wright quickly realized being a homemaker made her miserable, along with all of the abuse from Busch. He did write The Postman Always Rings Twice and Duel in the Sun (Wright would’ve played “Pearl,” the part eventually played by Jennifer Jones, had she not been pregnant), but she made him feel small. He had nothing on her talents, and he kept her out of reach of more capable artists on her level for the duration of their marriage. Not even a young John Sturges could wrench a decent film out of Busch’s script for The Capture, released in 1950 and starring Lew Ayres as a Western outlaw. He sticks up a man in the wild who refuses to raise his hands; he shoots, turns out the guy had a bum arm. At first it seems like just a nick, but the guy dies the next day of internal bleeding.

Lew Ayres narrowly escapes prison, but Wright, the man’s widow, figures it out. Ayres can’t help but return to the scene of the crime, and soon Wright traps him into a semi-perverse master/slave dynamic with her new farmhand. After hiring him suspecting nothing, she dug around in his wallet and found a press clipping about her husband’s murder. Now, keep in mind the guy was a payroll thief, and slept around all the time, as Wright later admits. But he was still her husband, and more than that, solid help around the farm. Wright never entertains Ayres’ niceties or attempts at flirting, and he says as much in a voiceover that, “If she could’ve stood over me with a whip, she would’ve.” Besides using the laziest framing device in movies—the priest confession, told in voiceover—The Capture is mostly just a tedious drag. Ayres is an otherwise capable actor, but he’s lousy here, as slimy and awkward as Robert Vaughn a few decades later.

Wright only shows up 20 minutes in, and then she’s in and out, never given any opportunity to act—her next husband, Robert Anderson, was obsessed with his dead first wife, and mercilessly wrote about her and eventually Wright in thinly-disguised novels that today people would call “auto-fiction.” These include Tea and Sympathy, later made into a film by Vincente Minnelli and starring Deborah Kerr. For a person as modest and private as Wright, the men she spent most of her life with never ceased to get on her nerves. Because her career was relatively brief before she sank into B-movies and television, there’s only one biography on her, Donald Spoto’s excellent A Girl’s Got to Breathe from 2016. She also appeared in an early Don Siegel movie a few years after The Capture, called Count the Hours! It’s much better than Sturges’ film, but perhaps only by comparison: Wright is in nearly every scene, and bleach blonde for a change.

The Capture has been restored and released on Blu-Ray because John Sturges made it. The new release includes featurettes (both under five minutes) on Wright and Sturges, and there’s nothing new here that Spoto, a friend of Wright’s, didn’t cover in his book. Sturges’ career was hugely successful, but in a way, similarly clipped, but by his own choosing: debuting in 1946, he released his final film 30 years later, keeping to the dictum that Quentin Tarantino would later extoll. His penultimate film, McQ starring John Wayne, is as vital and exciting as anything he did before the New Hollywood period. Watching McQ, it’s never obvious that this is a guy that started out in the studio system. John Huston’s 1972 Fat City is similarly remarkable for how young it feels, how miraculous and inexplicable it is that Huston, and later Sturges, could adapt to an entirely new mis en scene and way of filmmaking. Sturges is still under-appreciated, despite directing The Great Escape, The Magnificent Seven, Gunfight at the O.K. Corral, and Bad Day at Black Rock.

I understand. But I’d rather have the complete works of Teresa Wright, 1941 through 1957. Restored and in 4K please! The future is female, the men can wait!