Money Makes the World Burn Down

Collective is a good documentary about corruption, manslaughter, murder, bacteria, and poison in mid-2010s Romania. 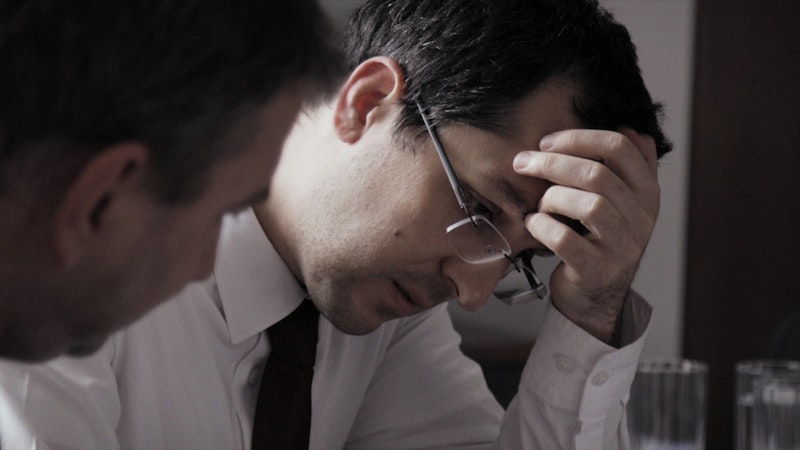 Collective shouldn’t go unnoticed among last month’s Oscar nominees—besides competing for both Best Documentary Feature and Best International Feature, it was also the first Romanian film to be nominated for any Oscar at all. An international first among several, but it didn’t win, and an older South Korean actress and a Chinese-American director winning in top categories, even in a down year, drowned out any noise Collective could’ve made in the two days or so when people cared about the Oscars this year (compare to 2020’s jubilant ceremony culminating in an historic win for Bong Joon-Ho and his Parasite, or even the baffling failure at the end of the 2017 awards).

Alexander Nanau’s documentary is no fluff or flour, and it’s as relentless as its heroes, journalists and a “technocrat” health minister. Collective begins with a tragedy and follows the aftermath for a year and a half. It’s not a uniquely Romanian situation: on October 30, 2015, metalcore band Goodbye to Gravity played at the Colectiv club in Bucharest, and they brought pyrotechnics. Promising to “give life to the science fiction artwork” of their new album, they apparently forgot about the horrible 2003 Great White disaster in Rhode Island that killed 100 people. I remember thinking at the time, even at 10 years old, never at a club show in my life, that pyrotechnics would be forever banned in all but stadium and arena shows.

Only vocalist Andrei Găluț survived the Colectiv fire; guitarists Vlad Țelea and Mihai Alexandru, drummer Bogdan Lavinius, bassist Alex Pascu all died. It only lasted a minute and nine seconds, but most of the 26 died from poison released by burning acoustic insulation. There was little opportunity for crushing, as in Rhode Island, because Colectiv had no fire exits. The proprietors were promptly arrested for their insane negligence and manslaughter, but Nanau’s film isn’t about them, or much of the fire itself (before the main titles, we see amateur video of the moment when the ceiling caught on fire. Găluț looks up and says, “That’s not part of the show,” and soon bedlam descends. Nanau cuts without showing anything graphic).

Collective shows Cătălin Tolontan, journalist for the Gazette, and eventually interim health minister Vlad Voiculescu, as they attempt to untangle the corruption in their country that led to such a dangerous building passing inspection for concerts—but that’s quickly dropped in favor of the more interesting and horrific conditions at Romanian hospitals, where a further 38 victims from the Colectiv fire died of treatable injuries, almost all of them from otherwise preventable bacterial infections. Besides unsanitary facilities and abusive management at the hospitals themselves, the disinfectants they were sold were diluted by the manufacturer in another example of plainclothes embezzlement and third hand murder.

Tolontan and Voiculescu do their best to clear up the confusion between this government official being paid off and this other one “committing suicide” and the “unscrupulous mobsters” that are behind so much of the laundering and enforcing of this dingy state with little morality or commitment to truth and justice in its ranks. After the Colectiv fire, people marched in the streets and made conditions bad enough for the Social Democrat party to step down from power and allow the “technocrats” to take over for a year until general elections could be held again. Propaganda wins again: Bucharest mayor Gabriela Firea excoriates Voiculescu’s team for keeping patients in need of lung transplants from going into Romanian hospitals, preferring to send them to Germany or Vienna, “where he used to work.”

Voiculescu, who looks like Buster from Arrested Development but never goes bananas, can only roll his knuckles and insist so many times that these hospitals are death traps full of “some of the strongest bacteria in Europe.” Anyone that goes in for surgery there will die, so he sends them to Germany and Vienna, where again, “he used to work.” The Social Democrats win in a landslide victory, their biggest ever, and Voiculescu’s father calls him at the end of election day. He says he had “low expectations” but is nevertheless stunned and furious that they got their biggest majority ever. “How could this happen? You should go back to Vienna, where you can help people. They don’t listen here.”

It’d be easy to say after seeing Collective that Romania’s problems are specific to their country and Eastern European “gangsters” as so many American liberals view that part of the world today. But remember that this fire happened just two weeks before the massacre at the Bataclan in Paris, and after watching people beginning to panic as Colectiv catches fire, it’s hard not to think of all the footage we’ve seen of mass shootings, from every conceivable angle and with much greater frequency than fires or stampedes. Just like here, nothing was done in Romania after all those people died, and “justice” loses, in the real world, once again.

More poignant and sad than that is the visible effect the affair has on Voiculescu, as well as Tolontan and his colleague Mirela Neag. The journalists are both relentless and steadfast in their work, even as it takes them to the point of being threatened. Towards the end of the film, Neag confides in Voiculescu that a government official approached her and said her family was in danger. She looks unsure for the first time, and Tolontan does not protest. Voiculescu is just as exhausted, defeated in more ways than one. There is no resolution in Collective, and to look beyond the film for updates or even context (like the band name, which is never mentioned) is to miss the point: this is a film about laziness, murder, and greed metastasizing throughout an entire state apparatus, one which appears totally apathetic to whether or not its citizens live or die in an unsafe nightclub or even receive adequate medical treatment.

And nothing changes. Again, to say, “this could never happen here” is a cop out, because of course it can—Andrew Cuomo’s nursing home manslaughter is only the most recent example. But I’m not surprised it wasn’t honored at the Oscars, not only because so few people in the Academy probably even watched it, but because it’s so at odds with the prim, moralist stance the awards have taken towards itself and current events for so long. Of course Nomadland won Best Picture, because it stars Frances McDormand among real “houseless” people working in the gig economy after losing everything. Not all hope is lost—when Collective cuts to black and the credits begin to roll, you’re unsure if anything will ever work out right again.