In Crossfire (1947), overblown noir aesthetics glide over a righteous but rote story about anti-Semitism. 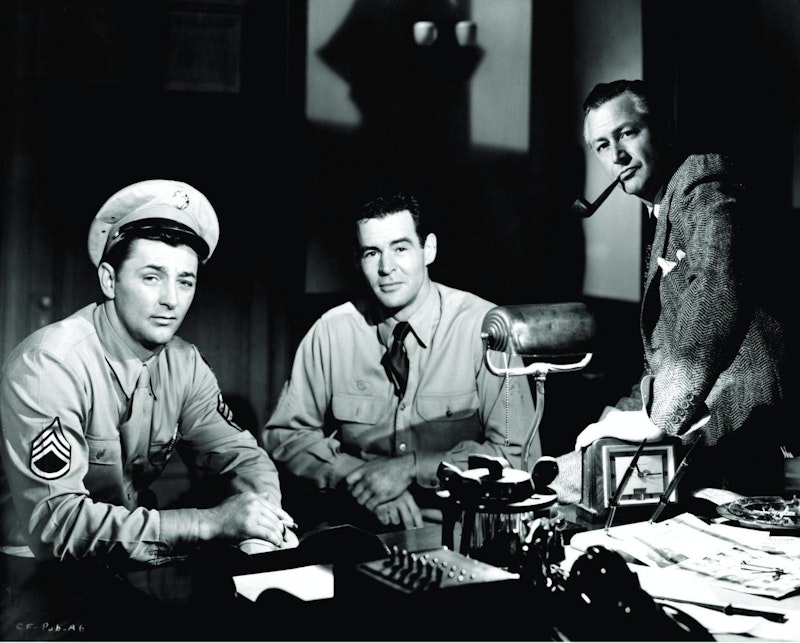 In the summer of 1947, RKO released the first Hollywood movie with the word “Jew”—and not just that, but “Jewboy,” too, many times, always said by Robert Ryan, ever reliable as the asshole, (from a book by Richard Brooks) the fascist at the center of Crossfire. Directed by Edward Dmytryk and written by John Paxton , Crossfire was produced for nothing next to Gentlemen’s Agreement, the year’s other Hollywood film about anti-Semitism—but, like Gentlemen’s Agreement, Crossfire was promoted as something more serious, a movie where, in the trailer, producer Dore Schary implores the audience on how important this film is—he claims he can hardly show any footage due to its sensitive content.

The film opens with one low-angle shot of a wall, where we see the murder in question occur, all swinging silhouettes. Joseph Samuels (Sam Levene) is killed by an anti-Semite over some petty dispute, but its particulars are not important: Montgomery (Ryan) is the only real suspect, and his visceral hatred for Jewish people erupts several times before he’s finally fingered.

Crossfire is a good movie about the perniciousness of anti-Semitism, 84 minutes that anybody could see and benefit from. This is not Night and Fog, a film everyone is required to see. This is a film noir, but only two shots are fired (at the same person), and much of the last 10 minutes isn’t a chase or a shootout but a lecture from Robert Young to Robert Ryan (medium shot looking just off camera to the left, the only thing keeping this sequence from feeling like a contemporary newsreel). He tells him that, “Hate is like a gun,” and all men are equal, and so on.

There’s nothing revelatory or shockingly “dated” in Crossfire’s morality or politics—but it is a strange brew: when Ryan arrives to get his 10-minute talking to from Young, he throws himself up stairs that are lit like Murnau, tall shadows growing and shrinking as Ryan staggers up to receive his punishment… a lecture.

Gloria Grahame almost steals the movie with two scenes—it’s an appearance like Carole Lombard’s in The Eagle and the Hawk, both more like than Dietrich than anything either had done before or since. They are sirens dropped into a story full of men pushing each other around, talking, screaming, but mostly talking. There’s some physical violence, but all of Crossfire is physical, a completely visually assured film. It’s an exciting movie, but this isn’t the approach that works with this kind of ribbon pin dialogue.

Robert Mitchum is third billed, only in about a third of the movie, without much to do. More than anything else, Crossfire is a visual accomplishment, and its perfect tracking shots and expressionistic lighting glide over material better handled by Kazan, or Dmytryk in a more muted mode. But “hate is like a loaded gun,” and I can only imagine what seeing this movie upon release (months before Gentlemen’s Agreement) was like—taboos broken, righteously, a didactic ending forgiven for its attempted social value.

Dmytryk was nominated for Best Director at the Oscars the following year, but by 1951 he was in prison along with the rest of the Hollywood Ten. Unlike Dalton Trumbo, he was not a lifelong communist and named names to get out early after being hung out to dry by his free “comrades” and by the suspicious COMINTERM (which you can see him ranting about in this excellent 1995 TV documentary on the Hollywood Blacklist).

He went on to a relatively successful career, directing The Caine Mutiny in 1954 and Raintree County in 1957 (The Left Hand of God, from 1955, is worth looking at: a late Gene Tierney performance, Humphrey Bogart playing a priest two years before his death, and the glorious anamorphic distortion of early CinemaScope movies). But Crossfire was his last overt political statement.

Gentlemen’s Agreement is the better film about anti-Semitism in America after World War II, if only because its “message” goes deeper than slurs (other than a bracing moment in a restaurant with John Garfield), anchored by Gregory Peck’s peak morality play performance. Crossfire is the more inhibited film, ironically: without bodies, sweaty close-ups and slanted shadows can only do so much without payoff. Again, there is physical violence, but when it erupts, it feels like schoolyard violence, and things are resolved without any serious consequences. Ryan, the anti-Semite, is shot down in the street as he attempts to escape custody for the murder of Joseph Samuels, and soon the film is over.

Nothing serious or in-depth about anti-Semitism ever comes up, and its “appeal,” or, more generously, its only sledgehammer against its topic, was the epithets “Jew” and “Jewboy.” It’s chilling when Ryan rants about the man he killed, and how horrible he was, how maybe it wasn’t such a bad thing he got knocked off. Ryan, among the three Roberts here, stands alone. It’s a performance similar in some ways to his in Bad Day at Black Rock, another quickie genre movie cloaking an anti-fascist script. Ryan’s jitteriness and the energy of his rage are matched by the boyishness of his face, and his painfully earnest eyes, like Winnie the Pooh. Even when he’s playing people at their most evil, Ryan embodies men torn between Heaven and Hell.

Crossfire is more than a curio, though its latest home video release on Blu-ray is worth more for its commentaries and featurettes. I think the circumstances surrounding the movie—from how it was written and made, to how it was initially promoted and then quickly passed over in favor of Gentlemen’s Agreement, and its status as the last “lefty” Hollywood movie of the Classic era—are more interesting than the film itself, which often looks great but holds back in content too often, a punk playing dress up for the country club—or the gates that our heroes cannot pass.