Basil Dearden’s Victim (1961) is a key film in Dirk Bogarde's career, a performance informed and and entwined in his personal life. 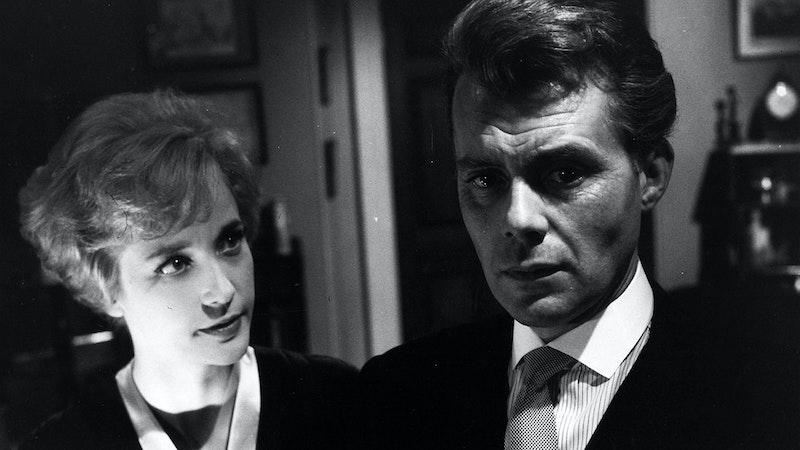 Basil Dearden’s film, Victim (1961) begins with the suspense of a spy film. A young man, Jack Boy Barrett, is feverishly running away from what appear to be the police authorities. He informs a friend to deliver a parcel to him. The parcel, it turns out, contains the newspaper clippings about the well-regarded barrister, Melville Farr (Dirk Bogarde). It’s not yet clear what Barrett’s connection to Farr is, but while he’s being pursued by the police, there are also blackmailers watching his every move.

It turns out that there are no spies, this is not about MI6, and there’s no James Bond in this plot. Barrett is pursued because he’s gay. At the time, homosexuality in Britain was against the law, and Dearden’s film was courageous to make. It was the first time when the word “homosexual” was used in the film, and it faced many censors upon its release.

As the plot advances, Barrett’s arrested and taken to the police station. Before that happens, however, he appeals to Farr. It turns out that Farr is gay himself (despite being married and having a prestigious standing in the society) and may have been involved with Barrett. He’s presented with a photograph taken by the blackmailers, in which he and Farr are seen in the car together. The implications are clear despite the fact that there’s an ambiguity in the photograph. Farr misunderstands Barrett’s plea and is instead convinced that it’s Barrett who’s trying to blackmail him. Life for Barrett ends tragically, as he commits suicide in the prison cell.

Victim is a film of social and political commentary. It’s almost impossible to relate to such a reality given the Western society’s attitudes toward homosexuality today. It has echoes, if not direct quotes, from what is known as the “Wolfenden report,” a document that successfully decriminalized homosexuality in Britain. It recommended “homosexual behaviours between consenting adults in private should no longer be a criminal offence… The law’s function is to preserve public order and decency, to protect the citizen from what is offensive or injurious… it is not the function of the law to intervene in the private life of citizens, or to seek to enforce any particular pattern of behaviour.” The film slightly sensationalizes the issue in order to bring the depth of the problem to the light. After all, real lives are impacted by this, especially on a psychological and existential level. It isn’t simply a political or social problem.

Yet despite the historical specificity, which seems so far away in our collective consciousness, the anguish of these men is visceral, immediate, and timeless. Naturally, Bogarde is at the center of the film. Like in most of his other performances, he brings intensity to the character. Here, we witness the depth of spiritual restraint, stoicism, and moral action. Farr’s interiority is revealed slowly but always subtly. It turns out that he’s a man of great moral character because he decides to risk the entirety of his life—marriage and career—in order to apprehend the blackmailers (this is an interesting mystery in itself when in the end, it’s revealed who the perpetrators of this terrible scheme are).

Bogarde’s Farr faces his own interior struggles. In a conversation with other prominent men who’ve kept their sexual orientation a secret, Farr reveals that he’s never acted on those impulses despite the fact that many times he wanted to. Bogarde doesn’t present this reality in a strangely moralistic way. He doesn’t think that he’s better than others in any way. But at the same time, he’s in full possession of his decisions, and throughout the film, he has power. The society’s prejudice and criminalization, as well as other collectivist notions of homosexuality that treat gays as sub-human, have no effect on Bogarde’s depiction of Farr. None of this can shake the inherent dignity of Farr. In this case, he stands out as a human being first, separated from the society’s illogical laws and other homosexuals. He’s his own man.

Farr’s vulnerability is most visible in the powerful encounter with his wife. As the story unfolds, his wife (Sylvia Syms) suspects that something‘s wrong. She pleads for him to tell the truth. She, rightfully so, demands an answer as to the true nature of Farr’s relationship with Barrett. As he’s fighting to find the correct words, he’s fighting the very state of nature within himself.

His wife is trying to understand him but her own ontological constitution is crumbling down. She’s torn between accepting Farr as a separate human being and righteous anger at being rejected, not only as a wife but as a woman. Tell me truth, she demands! More than anything, she wants to know whether the relationship with Barrett was enacted and consummated. Emotionally ravaged, yet remaining present in his interior stoicism, Farr reveals that he rejected Barrett precisely because he felt attracted to him. In this moment and with perfection, Bogarde reveals Farr’s anguish, love, and courage.

It’s difficult not to think about Bogarde’s private life when watching Victim. Yet, on some level, it’s completely unimportant. Bogarde elides both the private and the collective consciousness. Even the social and political issue of that time is transcended because Bogarde’s focus is to show the humanity of the person. Ultimately, for Bogarde, the only thing that matters is Art itself.