Men Think With Their Dicks. What’s Next?

Slow West and Ex Machina are style over substance, but you don’t know it. 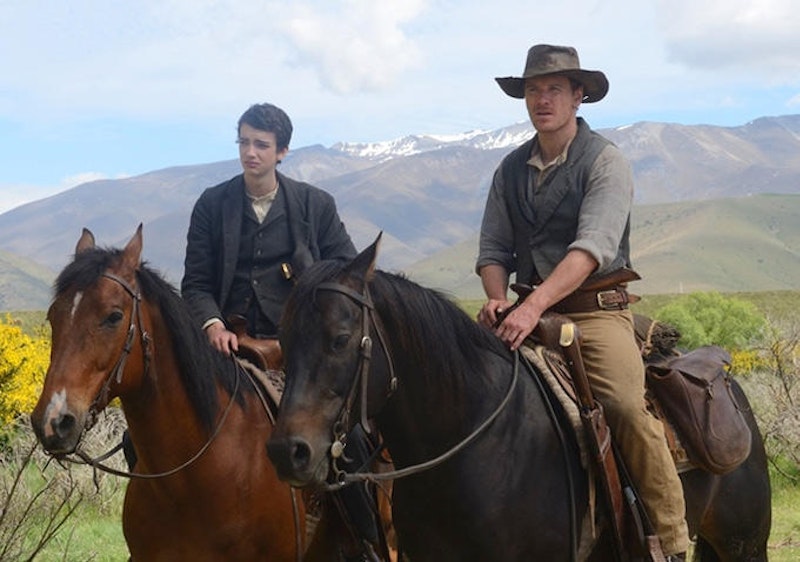 Slow West is slick and stylized, a birthday box of a movie with a simple plot and as little dialogue as possible. How many more yarns about the Wild West and cowboys and desperados and bounties can there be? It’s so tired, second only to World War II stories. True Grit was good, but I never need to see it again: there’s too much talking, not enough to read into. The best “western” I’ve seen this century is No Country for Old Men, expansive and empty, brutal and beautiful. The popularity of cable television shows in recent years has made movies more boring and less relevant. A TV series needs to hook you a dozen times per season, and it’s done through plot, hoping you’ll be itching to know what happens next. Binge watching is a good name for it: you feel like a junkie after finishing multiple seasons of a show in a weekend, bloated, empty, depressed. Good movies give you a couple of hours to chew on for hours, days, weeks, months, even years. They can be revisited at different points in a life like a book.

Slow West isn’t as dark, deep, or depraved as a Cormac McCarthy story, but it doesn’t reach, it’s a perfect postcard story about a lonely bandit, a lovesick kid, and the cartoon characters they encounter. This would sink a movie that didn’t look good or feel cool, but Slow West earns its space and justifies its well-worn territory. You’re not hammered with plot or jokes—sly moves like an Acme-esque jar labeled “SALT” exploding and pouring into our hero’s already fatal wounds. Unlike most Westerns, Slow West is full of bright, saturated colors, none of that dull sepia-toned bullshit.

Ex Machina is another movie out now that’s been much more successful than Slow West, a slow burn word-of-mouth thriller that will stay in theaters well into the summer. It’s also stylized and sparse, and shot beautifully, full of saturated colors and none of the harsh fluorescent lighting of most sci-fi movies. But it’s not as smart or deep as it wants to be.

Half a dozen people have implored me to see Ex Machina for a month, said I’d love it, that it’s a better take on the themes explored in Her: the ethics and implications of female artificial intelligence and its relationship to men. Ex Machina isn’t a sappy cop-out with the depth of an Apple commercial like Her, but it’s not thought-provoking or an original piece of writing. Men think with their dicks—old news. Never mind my severe Oscar Isaac problem—he’s insufferable, but he gets his in the end, along with the poor programmer played by Domhnall Gleeson, who is duped by a beautifully rendered android named Ava into setting her free from Isaacson’s mad scientist compound, just as he’s about to disable her and start on a new and improved piece of A.I. Gleeson absolutely deserves to starve to death after Ava locks him and Isaac’s body in the compound. So many more interesting ideas and issues are suggested or passed by, like how Ava’s facial reactions were collaged from hacking every smart phone on the planet, or how—in this near future—social media is a relic of the past.

Director Alex Garland has said that Ex Machina is Ava’s story, not Gleeson’s or Isaac’s, but that feels like a convenient and dishonest cop-out, when we spend most our time with and getting to know these two tech bros, and practically nothing about Ava. Ex Machina is haunting, but there’s not much beneath the surface that hasn’t been covered before. Men think with their dicks. Great, what’s next?