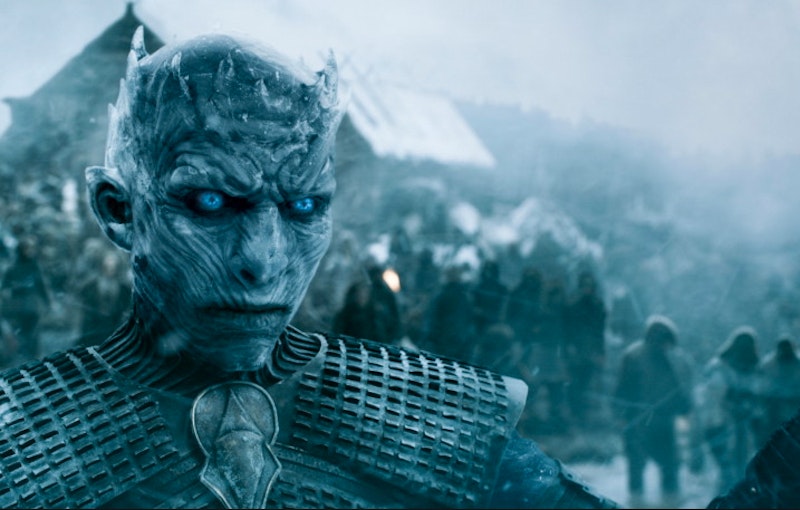 “I don’t need an army… I need twenty good men.” With the winter snows falling hard, Ramsay decides to take the fight to Stannis. Roose reminds him that they have the superior defensive position, but Ramsay suggests this is “an opportunity to show the people of the North how House Bolton treats Southern invaders.” We’ve seen Ramsay fight before, when Yara came to rescue Theon, but it’s not clear how he intends to defeat an army. Still, if Stannis ever attacks Winterfell, it likely won’t be this season, since the second half of the latest episode is given over to maybe the best action sequence GoT has ever done: Jon Snow and the wildlings vs. hordes of White Walkers.

We’ll get back to that. “Hardhome” has a few other things going for it too: Cersei is still locked up, told by Qyburn that her trial will be held soon, and that Tommen has locked himself in his chambers—“his servants often find his food in the hall, left untouched.” Meanwhile, Kevan Lannister has returned to King’s Landing and rules as Hand of the Kind, though he refuses to visit Cersei, knowing all too well the mess she’s made. Qyburn suggests she confess but Cersei is too proud for that (yet).

At Winterfell, Sansa finds out that her brothers, Bran and Rickon, weren’t killed by Theon—“I couldn’t find them… it was two farm boys”—though since Reek has no idea where they are and Sansa can’t leave, there’s not much she can do about it. Maybe this is a job for Brienne? We know that Bran (and Hodor) won’t appear this season but Rickon, who hasn’t been seen since season three when he went off with Osha, might.

Then there’s Arya, who takes on her first assignment, watching a corrupt dock merchant (“a gambler”) who offers a sort of life insurance to ship captains, paying their families if they should die during their voyage. “But,” Jaqen H’Ghar says, “perhaps the gambler loses his bet and decides he doesn’t have to pay after all. A destitute woman and her small child, what can they do to such a man if he keeps their money for himself? To whom can they turn for recourse?” The answer, of course, is the Many-Faced God.

And in Meereen, Daenarys decides that Tyrion is fit to advise her after all, first asking him what she should do with Jorah. “A ruler who kills those devoted to her is not a ruler who inspires devotion,” Tyrion says. “You’re going to need to inspire devotion, and a lot of it, if you’re ever going to rule across the Narrow Sea… but you cannot have him by your side when you do.” In the end, Jorah is exiled, and returns to the merchant who bought him for the fighting pits—“Let me fight for her and I belong to you.”

The alliance of Tyrion and Daenarys finally unites two disparate storylines. Daenarys has been moored in Slaver's Bay for so long that even Tyrion suggests the obvious, maybe she's already where she's meant to be. "There's more to the world than Westeros, after all. How many hundreds of thousands of lives have you changed for the better here?" But Daenarys isn't having it. It's not the Iron Throne she seeks, but something more—a total social upheaval. “I’m not going to stop the wheel," she says. "I’m going to break the wheel.”

But all of this is secondary to the nearly 20-minute fight at Hardhome. Jon, with the help of Tormund, manages to convince some of the Free Folk to sail with him back to Castle Black, and though he can't convince the Thenns, he doesn't have to wait long before his point is made for him: wildling, crow, it doesn't matter to the Army of the Dead, who overrun Hardhome before all the boats can be loaded. It's a dizzying sequence, and director Miguel Sapochnik handles it beautifully, from Jon learning that his Valyrian steel sword can kill the Walkers, to the giant Wun Wun stomping around, to the Night's King resurrecting the dead as Jon and Tormund and the last survivors row to safety. It's a terrifying reminder that the fight for the Iron Throne is nothing compared to the fight to come against the White Walkers.