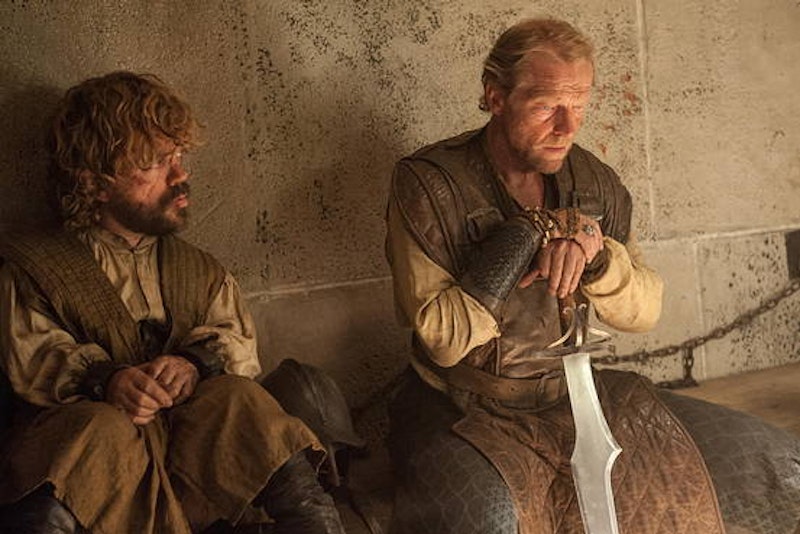 Sadly, they’ll be no cock merchants. Tyrion and Jorah are brought to a slave auction for the Meereenese fighting pits, and Jorah’s exaggerated exploits earn him a hefty price tag of 20 gold honors. Afterwards, Tyrion manages to con his way along—“You have to buy me as well… we’re a team, I’m a great fighter too.” Shortly after, the two wait at an exhibition reluctantly attended by Daenerys. When Jorah realizes she’s there, and that she’s sickened by the slaughter, it’s now or never. He lays out the other fighters with non-fatal blows, then presents himself and removes his helmet. “Get him out of my sight,” she tells her guards. “Khaleesi, please… I brought you a gift!” At which point Tyrion introduces himself, and just when you think the episode is over…

Cut to Cersei visiting Margaery in her jail cell. Margaery has no kind words for her—“Get out you hateful bitch!” “Her accommodations seem sufficient,” Cersei tells the High Sparrow, and if she thought she was in control of this fanatical cult, how wrong she was. The High Sparrow knows about all about her incestual indiscretions, not just with Jaime but with Brother Lancel as well. “A man of the people,” Lady Olenna suggested earlier. “It’s an old game, dull and unconvincing.” But the High Sparrow proves himself to be a man of the Gods, true to his convictions—“the Tyrells finery will be stripped away, their lies knocked down, their true hearts laid bare for all to see… What will we find when we strip away your finery?” Out comes Brother Lancel, and when Cersei tries to leave she too is imprisoned. Who will King Tommen turn to now? Please tell me it’s Olenna.

Likely it won’t be Jaime, who’s managed to avoid his own jail cell in Dorne, though there’s no telling when he’ll be allowed to leave. “Threats have been made,” he tells Myrcella. “Dorne’s too dangerous for you. I’ve come to take you home.” But Myrcella isn’t interested in going home. “I love Trystane. I’m going to marry him and I’m staying right here.”

Meanwhile, Bronn avoids certain death by impressing Tyene with a ribald Dornish ditty. Turns out, the Sand Snakes are every bit as proficient in poison as Oberyn was. “My dagger was coated with a special ointment from Asshai,” Tyene tells Bronn as he collapses to the floor. “They call it The Long Farewell…” She unhooks a capsule from her necklace—“the only antidote”—and tosses it to him. “I think you’re very handsome as well.” GoT's Big Story stuff can really plod along at times, but the minor scenes never fail to impress.

Up North, Jon Snow rides off to negotiate with the wildlings, and Maester Aemon finally succumbs to his long illness. The next morning, after Sam eulogizes Aemon and his body is set ablaze, Ser Alliser leans over and whispers, "You're losing all your friends, Tarly," which turns out to be less a threat than a warning, as later that night Brother's Derek and Brant attack Gilly. Sam's bravery may well have gotten him killed if it weren't for Ghost showing up, but at least he’s rewarded with some candlelit lovemaking.

And at Winterfell, Sansa fails to enlist Reek's help. She begs him to light a candle in the top window of the broken tower (alerting Brienne, who still watches from afar) but Reek instead confesses everything to Ramsay, who promptly flays the old woman who told Sansa “the North remembers.” Sansa does manage to rile Ramsay some, talking about his newly pregnant stepmother. “You’re a bastard,” she says. “A true-born will always have the stronger claim.” Ramsay reminds her that’s he been made a Bolton by royal decree but Sansa cuts in, “Tommen Baratheon? Another bastard.” Luckily for her, she now knows another bastard, her half-brother Jon, isn’t far away.