The French Dispatch is another stellar but familiar offering by Wes Anderson. A- 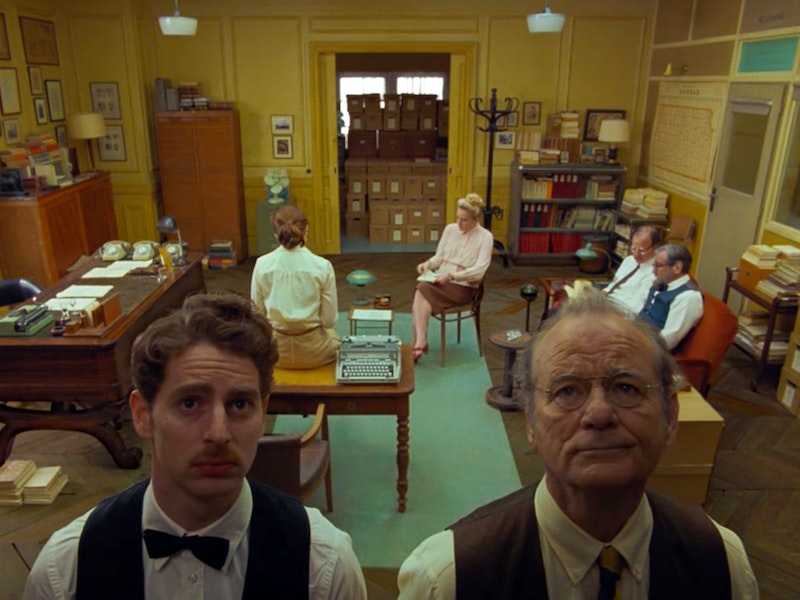 Is it relevant that Wes Anderson does a slight variation on the same thing just about every time, even if it’s always great? That's the question about the director, as he debuts his new film The French Dispatch.

Anderson did change paths with his 2018 stop-motion animated film Isle of Dogs, but here he gets back to live-action. As the years go by, Anderson's locations change a lot, the color palettes adjust a little, and the actors cycle in and out, but a couple of themes have remained in Anderson's live-action oeuvre. The symmetrical, dollhouse aesthetic, and the combination of wit and heart.

This time, with The French Dispatch, Anderson has made a homage to The New Yorker, mid-century journalism, French New Wave cinema, and France in general, with specific nods to William Shawn, James Baldwin, and other 20th-century writers that the director likes. It's set in a fictional French metropolis called "Ennui," which is a skewed version of Paris not unlike the New York City of The Royal Tenenbaums.

While Tenenbaums was a storybook, The French Dispatch is meant to represent an issue of the titular magazine, which is established as the France-produced supplement to a newspaper in Liberty, Kansas. It’s led by Bill Murray's Shawn-esque editor, who appears mostly in a framing device, including other newsroom characters (Elizabeth Moss, Jason Schwartzman, Griffin Dunne, and Fisher Stevens) who are in the film much less than you'd think. The idea is so good, in fact, that one wishes Anderson had made it into a longer limited series.

Following a brief interlude featuring Anderson regular Owen Wilson as a reporter exploring the city’s seedier side, the film settles into its three-story structure. The first (and best) is the tale of Benicio Del Toro as an incarcerated painter, inspired by his frequently nude prison guard muse (Lea Seydoux) and exploited by an unscrupulous art dealer (Adrien Brody, in his best movie performance in years).

The second explores the 1968 student protests, as a journalist (Frances McDormand) has an affair with a student leader named Zeffirelli (Timothee Chalamet), who also has eyes for a fellow motorcycle-riding revolutionary (Lyna Khoudri.)

This one never takes off, but the film picks up with its third story, starring Jeffrey Wright as a gay Black-American expat journalist who profiles a famous chef, who's cooking for the police commissioner (Mathieu Amalric, sporting a Hitler mustache.) It's quite a police department, one complete with a costume studio just for undercover missions; the chef profile soon turns into a kidnapping and chase scene.

The French Dispatch has one of the best scores of the year, from Alexandre Desplat. Anderson used Mark Mothersbaugh to score his historic run of Rushmore, The Royal Tenenbaums and The Life Aquatic with Steve Zissou, but in the mid-2000s he switched to Desplat, whose work here rivals the best of Mothersbaugh.

Meanwhile, the film ends poignantly. Anderson's movies tend to have wonderful final tableaus—think the cast party in Rushmore, the funeral in Tenenbaums—and this is no exception.

The French Dispatch debuted at Cannes back in May. It’ll make its last festival stop this week at the Philadelphia Film Festival, before opening Friday. It's exactly what I wanted from Wes Anderson—more of the same.