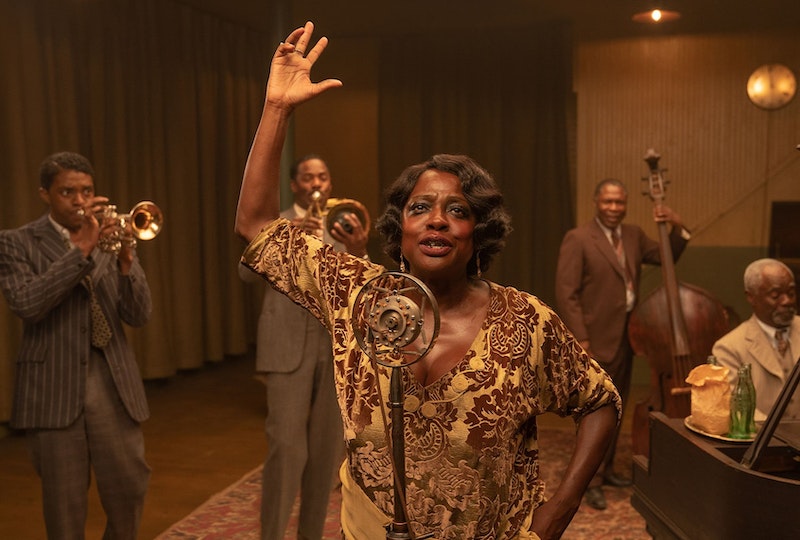 Ma Rainey's Black Bottom, the August Wilson adaptation on Netflix, features Chadwick Boseman's final performance, and one of his best. And it would be a great turn even if Boseman hadn't been battling advanced cancer at the time of filming. He gets three different amazing monologues, creates a fully realized character as part of a large ensemble, and plays the trumpet himself.

The film is adapted from Wilson's 1984 play, part of his Pittsburgh Cycle, and it's set in 1920s Chicago. The film’s set over the course of a long day's recording session, with the real-life famous singer Ma Rainey (Viola Davis) recording with a band, which including Levee (Boseman), Slow Drag (Michael Potts), Toledo (Glynn Thurman), and Cutler (Colman Domingo.)

There's some fantastic music, but the majority of the film is long dialogue scenes, with the characters sitting around having discussions and arguments for 10 or 15 minutes at a time. Both Ma Rainey and Levee get monologues about their ambitions for musical independence, which wasn’t an easy thing to achieve for black musicians in the 1920s.

Does the film feel "stagey," which has been the most prominent critique? It does, as Ma Rainey's was directed by the legendary theater director George C. Wolfe. But that didn’t bother me—it's got great actors, performing a classic American play. Also, it's a beautiful production, with occasional bursts of bright colors and everyone wearing very handsome suits.

Boseman nails everything from a story about a lynching to a speech where he curses God to the "he stepped on my shoe" speech. He embodies a role that was played on stage by Charles S. Dutton, who played Levee in both the original Broadway cast and a 2003 revival. Davis, who won an Oscar for her performance in Fences, the last Wilson adaptation, isn't far behind.

But really breaking through here are the actors playing the rest of the band, Thurman, Domingo and Potts. Thurman was the mayor on The Wire, the same show where Potts played Nation of Islam hitman Brother Mouzone. Domingo was in If Beale Street Could Talk, and also had a great turn in the recent Euphoria special episode. This film gives these actors a chance to shine.

August Wilson was one of the greatest American playwrights, yet his work was never adapted for the big screen until the 2016 adaptation of Fences, which was directed by and also starred Denzel Washington.

Washington had announced plans to adapt Wilson's entire 10-play Pittsburgh Cycle, although at some point the project moved to Netflix; Washington is listed as a producer of Ma Rainey's Black Bottom. And while Fences' script was credited to Wilson, the Ma Rainey movie was adapted by Ruben Santiago-Hudson.