The Social Dilemma is alarming, well-argued, and bleak, but most of what's said is common knowledge. B 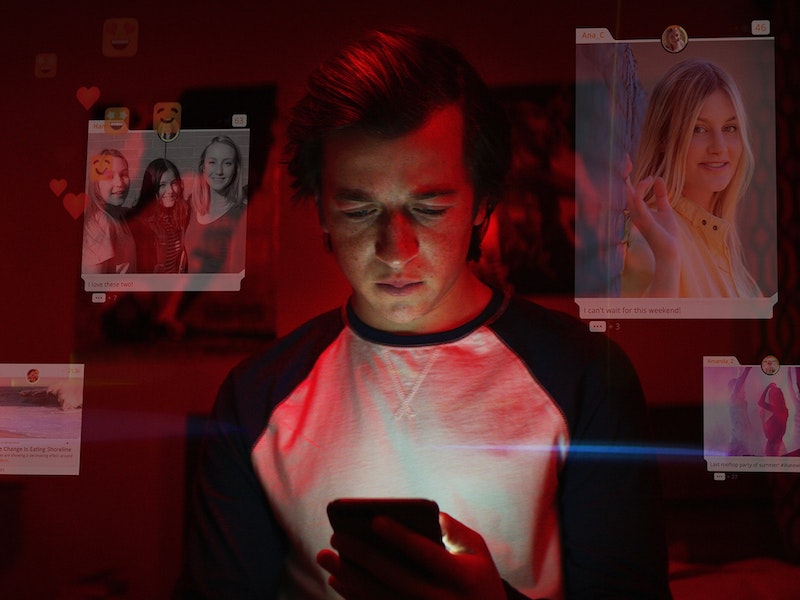 There have been many similar documentaries in the last few years about the perils of social media and other modern-day technology. But The Social Dilemma, a new doc that debuted on Netflix Wednesday, is more roundabout.

The Social Dilemma is three different films. In one, it's a muckraking documentary, featuring on-camera interviews with experts, including several former high-level employees at Facebook, Twitter, and other Silicon Valley giants who have since turned against their former industry. In another, it’s a fictional thread about a suburban family, played by actors, fallen under the spell of smartphone addiction. In the third, actor Vincent Kartheiser portrays the human personification of Facebook's A.I., a strange riff on the brain control panel from the Pixar movie Inside Out.

Directed by Jeff Orlowski, a documentarian who usually makes films (like Chasing Coral) about the threat of climate change, The Social Dilemma is alarming, well-argued, and bleak. However, a big weakness of the film is that most of what it's arguing is well-known. I was reminded of the scene from Netflix's great sketch comedy series I Think You Should Leave, where Tim Robinson, dressed as a hot dog, gives a speech about how "we're so buried in our phones."

As recently as the early Obama era, it appeared that Silicon Valley was a hotbed of American innovation that made the world a better place. But today, we know that things aren't nearly so positive. Smartphones are addictive. The social media companies can be shady, from collecting personal data to encouraging political polarization to enabling extremism and harassment.

Not only was there recently a 20-hour Congressional hearing about all that, but it's been the topic of several recent documentaries, like The Great Hack—also a Netflix release—and the recent festival film Coded Bias, which showed just how insidious facial recognition technology can be.

Of The Social Dilemma’s three portions, the talking heads are the most informative, even if most of them have that Silicon Valley way of speaking that makes it sound like they’re giving a TED talk. The part with the family doesn't work. Despite the presence of likable actors such as Moonrise Kingdom's Kara Heyward and Booksmart's Skyler Gisondo, it feels a lot like an after-school special.

I got a kick out of the parts with Kartheiser as the A.I in human form. It's a perfect casting of the Mad Men veteran, as shady manipulation is something the 1960s ad world and the 2020s A.I. algorithm have in common. And the actor, who has barely had any work of consequence since Mad Men ended in 2015, tears into the part, at some points with different versions of him on screen.

Another successful creative decision? In the dramatized segments, the big extremist threat isn't Nazis or Antifa, but rather "the Extreme Center."

"Do you check your phone before peeing in the morning, or while you're peeing?," one of the talking heads asks, and the film succeeds in making its point about the addictiveness of phones and the apps on them. But by the end, I wasn't persuaded to delete all of my accounts, as the film clearly wanted me to. That's because there are some good things about social media, such as the ability to get information quickly and share experiences with friends. I'd guess that Twitter has given more laughs than any other medium in the last five years. TikTok, for all its sociopolitical intrigue, is full of talented people, who are creating a new art form before our eyes. There’re a lot of awful things about YouTube, but it also has every music video and almost every great standup comedy special. This material isn't so terrible, in moderation.