The Origins of Gun Fu

John Wick and The Matrix wouldn't have existed without John Woo’s Hard Boiled (1992). 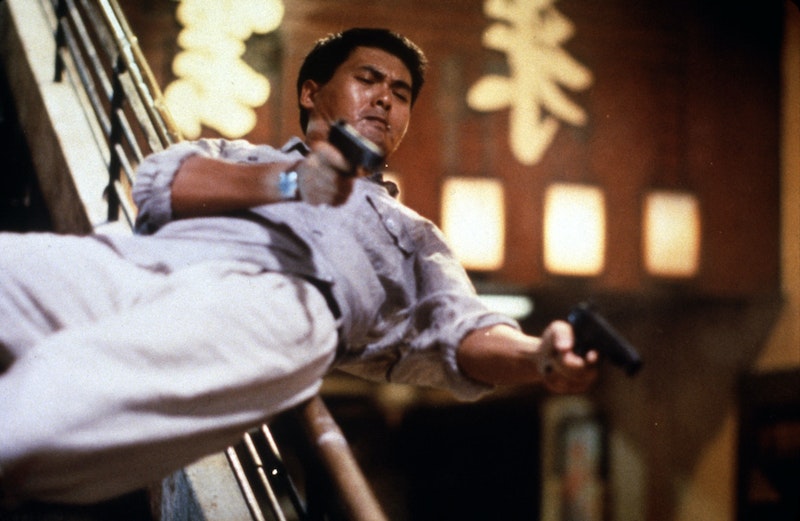 John Woo's 1992 masterpiece Hard Boiled begins with lead actor and anti-hero Chow Yun-fat sitting at a jazz bar, holding a horn, drenched in sweat, pouring a vodka and seltzer, slamming the glass against a bar table, and then chugging it down. Picking up with the drummer, he leans into a moody clarinet riff—the recurring tune that plays throughout this film.

Chow Yun-fat plays Tequila, a determined policeman who doesn't play by the rules. After an organized ambush on a group of gun smugglers, Tequila's partner is shot and killed. Instead of arresting the surrendering murderer and criminal, Tequila shoots and kills the murderer in cold blood, leading his superintendent to take him off the case. Now personally invested, Tequila secretly teams up with triad criminal Alan (Tony Leung), who due to an objection to the new school way the gang is now run, decides he wants to change his ways and help take down the same criminals he once worked for.

Hard Boiled is often remembered for its non-stop violence. Woo is noted as the first director to exhibit gun fu in his films. Gun fu is a signature of “heroic bloodshed films,” which originated in Hong Kong. Gun fu action sequences consist of firearm mastery, constant movement, and fearless determination.

A prime example of gun fu exists within the first 10 minutes of Hard Boiled in the tea house scene. No doubt Tarantino was taking notes during this ultra-bloody sequence which includes Chow sliding down a banister, double-fisting two pistols and firing them rapidly, never missing a target.

Originally the plot revolved around Anthony Wong's character and mob boss Johnny Wong being a psychopath who poisons baby food for pleasure. This idea was too much for producers, who it was in poor taste and wouldn't be received well in America. Right!

After finishing the first half of the script, screenwriter Barry Wong died during filming, leading to constant script changes throughout the filming process. Characters were added spontaneously, such as the unforgettable and ruthless villain Mad Dog, played by Phillip Kwok, who sports his trademark eye patch, and is largely regarded as one of the most brutal villains of all time. Plot twists were invented on spot to accommodate the changing temperament of the film. The entire film was significantly altered during the course of its filming.

Though the plot once centered around head of the triad Johnny Wong as a psychopath who poisons  baby food as a terrorist attack, the new script only included babies in the final hospital shootout scene. Tequila performs a grand shoot-out all the while cradling a newborn in his arms, rescuing the infant from the triad. When Tequila's pants catch on fire from an explosion, the baby then unknowingly rescues Tequila by urinating on his leg. The epic scene took 40 days to shoot, with major complications involved such as an explosion of glass flying into Leung's eye which sent him to the hospital for a week, as well as a series of noise complaints from neighbors.

Woo's previous films were criticized for glamorizing criminals. Hard Boiled was a response to this criticism and was intended to glorify the police. Chow's character was influenced by Steve McQueen in Bullitt as well as Clint Eastwood in Dirty Harry. A police officer whose moral integrity outweighs his respect for rules. (I'm convinced McNulty's character in The Wire was largely influenced by Tequila, though this has never been confirmed.)

American franchises such as John Wick and The Matrix surely wouldn't have existed without Woo's groundbreaking early films. Woo's knack for over-the-top action sequences, early usage of gun fu, and the distinct heroic bloodshed style he perfected over the years solidifies his position as one of the greatest action movie directors of all time.