I Love It When I See It 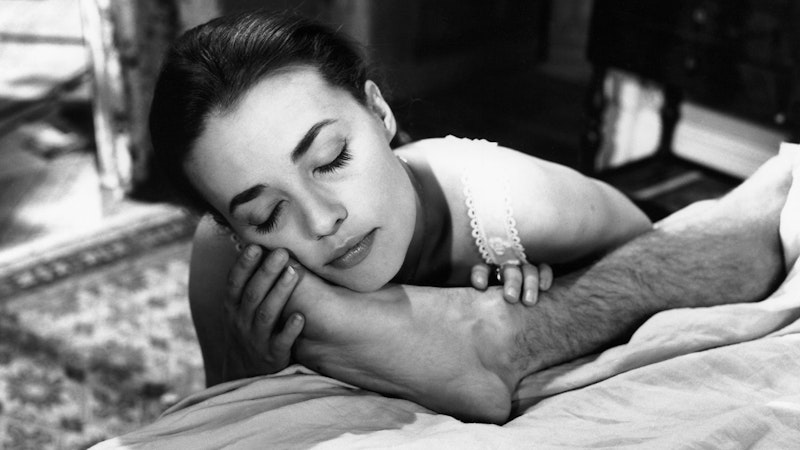 When Louis Malle’s The Lovers (1958) came out, it created a scandal in France for its frank treatment of adultery and female desire. In the United States, a theater manager was charged for showing obscene material. The case went to the Supreme Court, which ruled that the theater manager didn’t show “hard-core pornography.” In attempt to explain the decision, one of the justices made the now famous statement about pornography—“I know it when I see it”—and The Lovers didn’t fit that category.

Jeanne’s husband, Henri, is distant, and it’s understandable why Jeanne is seeking different companionship. She shows some love toward her daughter but even that feels like an emotion that’s barely on the surface. “Taking a lover” appears to be an acceptable act (especially in her social circles), and her husband’s suspicion doesn’t arouse enough jealousy or aggressiveness. He’s almost indifferent at the thought that Raoul (of whom she speaks a lot) is having an affair with his wife.

Jeanne decided to invite both Maggy and Raoul to dinner at their Dijon estate. On her way to the house, Jeanne’s car breaks down, and she’s rescued by a young man, Bernard, who’s an archeologist. Having saved Jeanne, Henri insists that he stay for dinner and the night. At first, Jeanne barely notices Bernard, but later in the night, as she’s walking the grounds in her nightgown, she runs into Bernard, who’s smoking behind the house. They go for a walk together, and in a quick moment of blissful discovery, they fall in love. After a few romantic scenes through the woods and on the boat, they consummate their love in Jeanne’s bedroom.

The next morning, as everyone is getting ready to go fishing, Jeanne simply gets in the car with Bernard and leaves, presumably for good. Her daughter is still asleep, and Henri seems unmoved by this betrayal, or at the very least, there isn’t any shred of masculine pride. He simply doesn’t care.

More than any people, ennui and anhedonia are the central “characters” in this film. As much as Moreau (as well as the subject matter) brings forth subtle, yet powerful eroticism, it’s the boredom and existential torpor that moves the reel forward. Jeanne isn’t a modern Madame Bovary. She’s not merely seeking a better sexual experience, as much as that is part of her need. She doesn’t elicit compassion either because she’s incapable of vulnerability. Yet she’s not calculating or hateful either. There’s a sense of in-between-ness of her existence—the specifically agonizing moment characteristic of the French New Wave Cinema.

Jeanne could almost be forgiven for leaving an indifferent husband (who’s most likely cheating on her with his secretary anyway), but abandoning her young daughter renders her a neglectful mother. As Jeanne and Bernard make their way into the bedroom (having spent most of the night in the woods and on the water, slowly drifting on a boat), she checks on her daughter, who’s peacefully sleeping. Jeanne adjusts her blanket and offers a motherly embrace, but she quickly moves out of one role to the next. As she completes being a mother, she morphs into a lover.

Almost every character in the film plays a role that’s not entirely authentic. There’s no ontological strength, and as a result, none of these people are whole. They’re a fragmented mess that’s masked by their social status. The only character who’s earnest and authentic is Bernard. His being rests in the fact that he’s an outsider, and he doesn’t have an obsessive need to be accepted and approved of. The upper-class society with their meaningless hierarchies and ontological delineations have no power over Bernard.

The eroticism in The Lovers comes primarily from Jeanne Moreau’s essence. She’s magnetic, intoxicating, subtle, and powerful. It’s her very being as a woman and an actress that gives meaning to this film. Malle relies on subtleties and narration (a common characteristic of the French New Wave) but somehow, it feels devoid of depth that eros itself contains. In comparison, Alain Resnais’ Hiroshima mon amour (1959) takes the depth of sensuality and eroticism to a metaphysical and spiritual level (which could be due to Marguerite Duras’ brilliant script and their seamless collaboration). Malle’s vision never reaches such heights.