Sometimes the very thing you love destroys you. 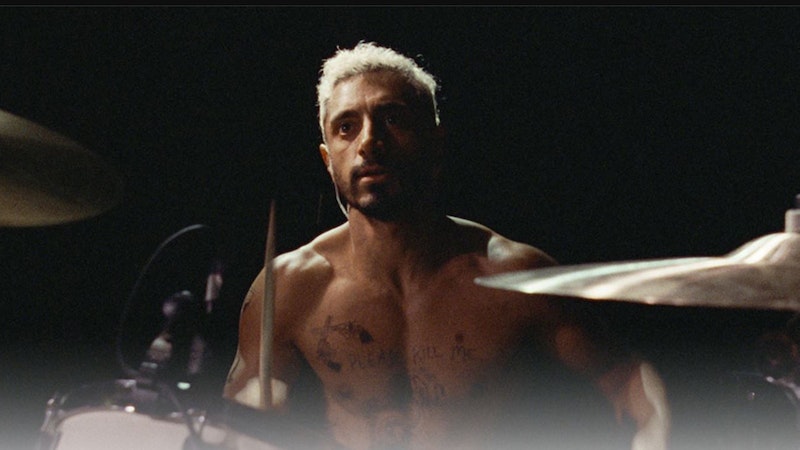 Sound of Metal (2019) stars Riz Ahmed as Ruben, an addict and drummer for two-piece noise-rock band Blackgammon with his partner Lou (Olivia Cooke). After Ruben experiences symptoms of tinnitus, he visits a doctor who tells him he’s lost 80 percent of his hearing and is expected to lose the remainder if he continues his current rock star lifestyle.

Ruben has been clean from drugs for four years, as long as his relationship with Lou. Directed and co-written by Darius Marder, the film implies that Ruben has substituted his addiction to drugs with the high of live performance. This method of coping has been largely successful for both Ruben and fellow addict Lou. Living in an RV, traveling from one gig to the next has given their lives meaning in an otherwise unforgiving world. Their band has not only stabilized their addictive habits, but also served as the wick igniting their relationship.

The world Ruben has built with Lou dissipates along with his hearing. Initially Ruben is less willing to accept his hearing loss, suggesting to Lou that he can be like a “click track” to her guitar playing. He believes surgery will bring everything back to normal and he just needs to raise the money. He doesn't want to stop touring. He refuses to accept the very thing he loves is destroying him.

Immediately notable is Ahmed's candid performance, though Marder and Ahmed's relationship wasn’t easy. The filmmaker refused to let Ahmed see dailies, a ritual that Ahmed viewed as essential to his process. After heated arguments, Marder let Ahmed know that he wouldn’t be his “enabler” and give in to his requests. Marder's idea was that by not letting Ahmed view the dailies, Ahmed would take less time analyzing his performance which would bring a level of urgency and rawness to the screen.

Tension was further exacerbated by Ahmed's inability to sleep, which Ahmed believes helped his performance. Anxiety before shooting day is a constant in Ahmed's acting career. Not only did Ahmed take drumming lessons for six months, he also learned ASL to prepare for his enduring role. This level of devotion can be mentally and physically taxing on an actor, as we've seen in Heath Ledger's Joker role.

While watching Marder's engrossing film, I drew parallels to Philadelphia-based experimental sound artist Jason DiEmilio, known musically as The Azusa Plane. Like Ahmed's character, DiEmilio developed tinnitus due to the loud volumes and harsh frequencies that he built his music upon. Unlike Ruben, however, DiEmilio also developed the rare disease hyperacusis that causes the patient extreme discomfort when exposed to sound. DiEmilio experienced pain with even the quietest sounds, making it impossible to play, listen to music, or even live a functional life. Though there is still little known about the disease, less was known in 2006 when DiEmilio took his own life.

Sound of Metal is a film about personal struggle—about confronting your deepest fear. Riz Ahmed's character goes through various stages of denial, depression, and transcendence while coping with his new reality. This is a perfect movie to watch during COVID times.