Olive Oyl and the Fantastic Made Flesh 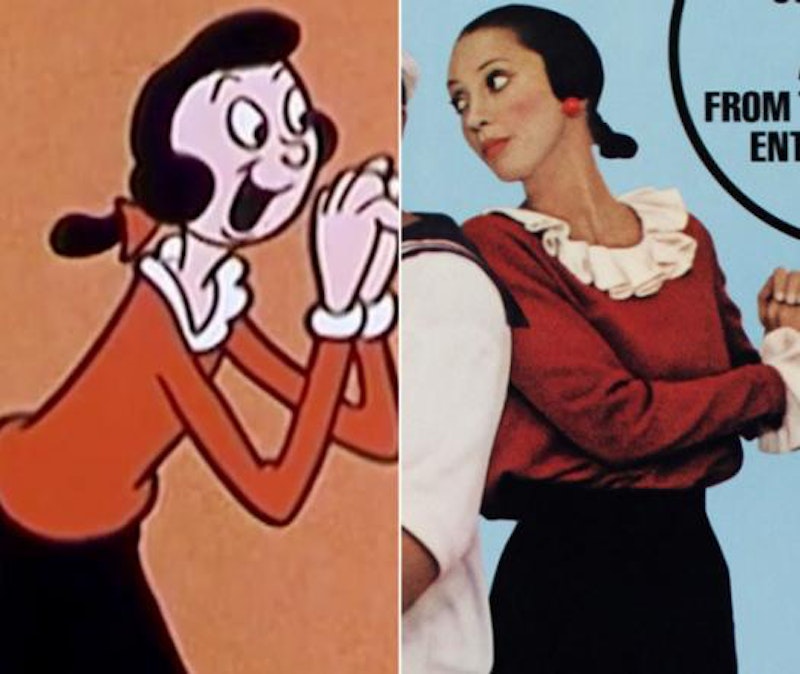 Seth Abramovitch did film history (and the world) a service last week with his story in The Hollywood Reporter: “Searching for Shelley Duvall: The Reclusive Icon on Fleeing Hollywood and the Scars of Making ‘The Shining’”. After vanishing from the public eye for nearly two decades, Duvall reemerged in grim circumstances shortly after Donald Trump’s election in November 2016: Dr. Phil, celebrated whore, grilled a defenseless and clearly mentally ill Duvall and produced some of the most disturbing and exploitative footage in recent pop media memory.

Abramovitch mentions this in the article, not only near the top, but via Duvall’s current neighbors somewhere in Texas, one of whom grills him about his motives as a reporter: “I'm not sure who you are… But out here amongst these rural Hill Country communities, we look out for each other and we take care of each other. Does that make sense?” Yes ma’am, the author says, in as many words—and the piece is really something else, another transmission from one of the 1970s’ and 1980s’ most interesting actors, one that wasn’t bleak and made you want to take a long walk off a short dock.

It sounds silly, but I was relieved by the piece—not only because of its place in posterity, but just knowing that Duvall appears to be basically okay and managing her life in a healthy way surrounded by people who love her. It’s trivial and even nonsensical: I’ve never met Duvall, and while her work is often spellbinding, she wasn’t that prolific, and a lot of her roles were for Robert Altman, a very particular director. He may have had his limitations, but he knew how to use Duvall and work with her. When I see her in Terry Gilliam’s Time Bandits, or even as Wendy Torrance in Stanley Kubrick’s The Shining, she’s playing into a caricature of herself, whether kind (Gilliam) or contemptuous (Kubrick).

Only once did she play a cartoon character in real life: Olive Oyl, Popeye, Robert Altman, 1980. Duvall went on to produce television shows for children in the 1980s and early-1990s, but only in Popeye does she embody a character from a comic strip and bring her to life. Olive Oyl is not animated, nor assisted by CGI or dummies or effects available at the time. Popeye is a lot more fussed over than I remember: on the recently released Blu-ray restoration, it becomes clear that the film should’ve cleaned up every award for production design, art direction, costuming, makeup, and, of course, Best Actress for Duvall.

Duvall’s performance as Olive Oyl is the greatest in the history of cinema. There are few more powerful or sustained examples of magic rendered forever on the screen, but this is one: to bring a cartoon character to life. Besides their uncanny resemblance, Duvall (and the rest of the cast) move like characters in a 1920s cartoon. Duvall is not alone here in her transcendence: everyone involved is committed to making something more true and exciting than all of the dog shit kids’ monster movies that would follow in the 1980s (Gremlins, The Goonies, even E.T.: Extra-Terrestrial). In anamorphic widescreen, Duval, Altman, Robin Williams, Van Dyke Parks, and company make the imaginary not only visible but vivid.

If my claim sounds insane, consider this musical number, where Duvall, I mean Olive Oyl, sings a song written especially for her and the movie: “He Needs Me,” by Harry Nilsson. It’s not just the beautifully pitchy vocal by Duvall, and it’s not just the sickly sweet and lonely organ, nor is it just the way the lampposts and even the environment contort and behave according to comic strip rules of physics and gravity. Shot in a sweet spot of practical effects and relatively sophisticated technology, this is a fantasy that you can share with anyone now, whatever age, without any disclaimers or notes about it being “dated” or even worse, an “old movie.” There are no “old movies,” just as there are no “old books” or “old paintings”—just ones people forgot about.

You can’t forget about Duvall as Olive Oyl in Popeye.

Early on, Olive Oyl fights with her family and pecks her head out like a bird, always answering “WHAT!?!” whenever she’s asked anything. It is with Altman where Duvall displayed nearly her entire range, if mostly by default, and in the hands of a less caring and wily director, Duvall as Olive Oyl would’ve been a one-note joke and she would’ve been the butt of it. I can only imagine how many people in Hollywood called her stupid and air-headed to her face, much less whatever was said behind her back. If Altman supported her in more ways than one through the 1970s, he also provided her major opportunities to prove the world wrong.

3 Women is considered Duvall’s best performance, but in Popeye, she and Altman go so much further, extending themselves as artists to not just show another porous, disintegrating reality, but to burrow so deep into the unreal and the imaginary and come out the opposite end with again, something more true: a two-dimensional comic strip character made flesh. In the film, Olive Oyl isn’t some romantic standby, or a hapless comic foil: she’s the star of the movie, not Williams, and it’s impossible not to develop tunnel vision whenever she appears in a scene. What they achieve is only akin to magic, as it’s the unreal staged and made vivid in real life Malta. It’s a film that makes your head spin, delirious and completely wrapped up in the image and sound of a woman who has doubled herself, and thus become whole.