Arya and Sansa's quest for revenge. 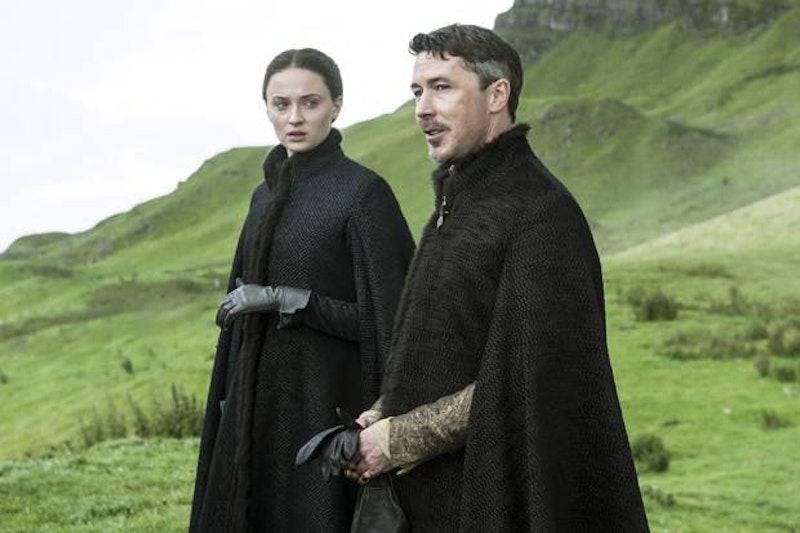 Poor Sansa, yet again engaged to a total psychopath. Episode three mainly focuses on what’s left of the Starks—yes, I’m including Jon Snow, even though he turns down Stannis’ offer to make him Jon Stark, Lord of Winterfell.

The episode opens with Arya at the House of Black and White. She’s spent a frustrating few days sweeping the floors and now demands answers from Jaqen H’ghar. “A girl wants to serve herself,” he tells her, and it’s true, she still thinks of H’ghar as someone in her debt, someone who can help her right the wrongs. Later, when she tells him she wants to be no one, he asks the obvious, “Arya Stark’s sword, Arya Stark’s clothes, Arya Stark’s stolen silver… A man wonders, how is that no one came to be surrounded by Arya Stark’s things?” And so she sinks her clothes and her silver, but can’t quite bring herself to throw Needle into the water. Instead she buries it under some nearby rocks, and I assume this won’t be the last we see of her sword.

There’s a bit of stalling to all of this. With random faithful praying to the Many-Faced God, and more than one dying at the altar, but Arya’s arc so far this season has had a lot of questions and very few answers. H’ghar tells her that her training has already begun, “Valar dohaeris: all men must serve. Faceless men most of all.” But Arya sweeping floors and washing dead bodies doesn’t make for very exciting TV.

Thankfully, Jon and Sansa’s scenes this week make up for it. Jon refuses Stannis’ offer, telling him he swore an oath to the Night’s Watch, and Stannis tells him he’s as stubborn and honorable as his father, before offering him some advice, send away Ser Alliser Thorne, “give him command of Eastwatch-by-the-Sea.” “I heard it was best to keep your enemies close,” Jon says. “Whoever said that didn’t have many enemies,” Stannis tells him. Ser Davos offers his own advice, with some help from part of the Night’s Watch creed (“the shield that guards the realms of men…”). “As long as the Bolton’s rule the North,” Ser Davos says, “the North will suffer.”

Later, Jon finds a fair compromise on Stannis’ advice, promoting Thorne to First Ranger, and sending Janos Slynt off to the ruins of Greyguard. When Janos refuses—“You can stick your order up your bastard ass!”—Jon proves he is indeed as honorable as his father, executing Janos himself, as Lord Stark taught him back in the very first episode of the show.

Meanwhile, Sansa and Littlefinger ride to Winterfell, and before they’ve even arrived Sansa has figured out that Littlefinger’s wedding proposal wasn’t for him. Sansa pleads with him, thinking she’ll be marrying Roose Bolton, “I can’t marry him, you can’t make me! He’s a traitor! A murderer!” “You’re not marrying Roose Bolton,” Littlefinger tells her. “No, you’ll be marrying his son and heir, Ramsay,” and both are unaware how much worse that actually is. “You’ve been a bystander to tragedy from the day they executed your father,” Littlefinger says. “…There’s no justice in the world, not unless we make it. You loved your family. Avenge them.”

Still, with Brienne and Podrick trailing nearby, and Stannis riding south "within a fortnight," and with at least one of Winterfell's servants telling Sansa upon her arrival, "The North remembers," I doubt this wedding will ever happen. Maybe there’s still something left of Theon Greyjoy—he turns away from Sansa, to avoid her recognizing him—and maybe he'll get his revenge on Ramsay after all.

Back in King's Landing, there's a wedding that does happen, with King Tommen marrying Margaery, who quickly sets to work to oust Cersei of whatever power she has left. The scene when Cersei visits Margaery and her attendants the day after the wedding and the two engage in some passive aggressive back-and-forth is GoT at its best—"I wish we had some wine for you, it's a bit early in the day for us." Don't count out Cersei though (as even Roose Bolton cautions), who by episode's end appears to have found an unlikely ally in the High Sparrow (played by the wonderful Jonathan Pryce), a man whose ultra-religious cult is continuing to run amok throughout King's Landing.

And while there's no Daenerys in this episode (which suggests something big in the next episode or two), we do cut back to Tyrion and Varys on their way to Meereen. Tyrion insists on stopping in Volantis, where the two run across a former whore preaching about the Lord of Light, and the savior that is the Mother of Dragons. Later, at a local brothel, Tyrion has an unfortunate run-in with Ser Jorah Mormont, who kidnaps Tyrion and tells him he's taking him to the Queen. Since I doubt he means Cersei, it'll be interesting when the two realize they're on the same side.