Lena Dunham Is Not Fat

You're just a sexist dinosaur. 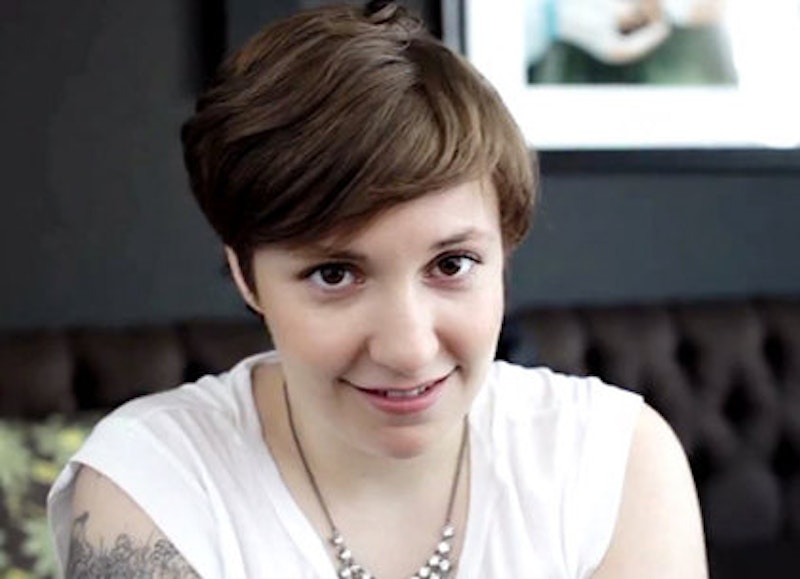 Give Lena Dunham and her appearance a break. I felt goaded into stating this obvious fact through casual comments uttered by men of a certain age: “she’s a dog/cow/pig/horse/whale/elephant/disgusting barn animal, she has no business getting so naked so often, let’s see more of that Williams girl and the British chick. Oh, she’s so annoying/pathetic/narcissistic to give herself so much screen time on the show she writes, produces, and directs, Prince-style. When she takes her shirt off, yikes! Love the boyfriend though, he’s a riot.” Forget about the zeitgeist-y Millennial stuff, Dunham’s Girls is important because it’s honest about sex and rejects the guilt built into most mainstream American entertainment w/r/t our potentially pudgy, puffy, pale, bruised, cellulite-ridden bodies.

You know, I find her very attractive, and this admission got disgusted gasps from my friends and colleagues of a certain mindset. “How could you? She’s a cow,” said one unflappable Boomer. “Never in a million years would I consider it.” Last year, when the show debuted, a few friends of mine complained that Dunham was grating, irritating, annoying, obnoxious, ugly, loud. You might’ve as well as said “out of her place” or “uppity.” A lot of men have a major, deep-rooted aversion to smart, funny, powerful women, especially one they wouldn’t beat off to. As if Dunham’s style will compromise a culture designed by and for the straight white reasonably good looking male to succeed. It’s complete horseshit. Bold, strong artists with a sense of self are what we need and they’re good for all of us.

But let’s put the show’s appeal aside. Yes, it’s true, few shows name drop iPhone apps or have dialogue as ineffably spot-on as Girls. But in the long run, if the show lasts another five, six, seven, years, which is probably going to be the case, it will help obliterate some of the shame of not looking like this. Even on HBO’s official promo poster for the first season, they airbrushed/caked the hell out of Dunham’s face and hair to make her look like a totally different, and less attractive person.

Rolling Stone’s Feb. 28 profile is a good example as to what makes Dunham so appealing to young people sick of living in a Boomer wasteland of outdated, insensitive, and harmful attitudes towards peoples’ bodies. Dunham’s famous line “I’ve been fifteen pounds overweight my whole life!” sounds ridiculous but when you really look at how quickly men disregard women of a certain weight, look or attitude not even as inhuman, but invisible, non-participants in the world to be ignored, you realize what a complete psychological hell that is, for all women. To talk about any woman like that, to say she’s a cow, she’s too fat, she’s got a weird nose, is to reinforce all the anorexic and bulimic teenagers, all the girls picking up speed as diet tool, and the completely unneeded anxiety women of all walks experience every day.

Christ, I thought this was all known, and obvious, but the way Dunham is talked about by the layman is disturbing. Don’t even get me started on Rex Reed’s review of Identity Thief where he called Melissa McCarthy a “female hippo.” This kind of thinking needs to be wiped away because it’s twisted and damaging, good for no one. That’s why I have a crush on Lena Dunham: she’s good and she knows it, and she doesn’t give a fuck if Howard Stern says she looks like Jonah Hill.